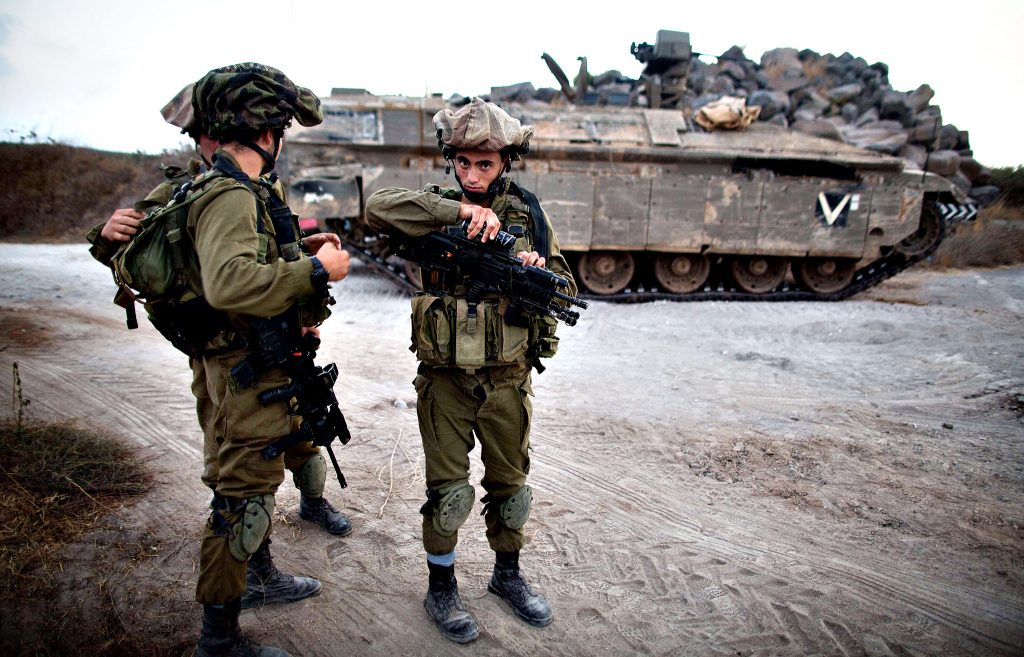 On September 8, Israeli troops entered a militant-held area in the eastern part of the Golan Heights, according to sources loyal to Syrian pro-government sources.

Israeli troops allegedly advanced 200 meters inside the area controlled by the so-called Syrian moderate opposition and reached the village of Beer Ajam. 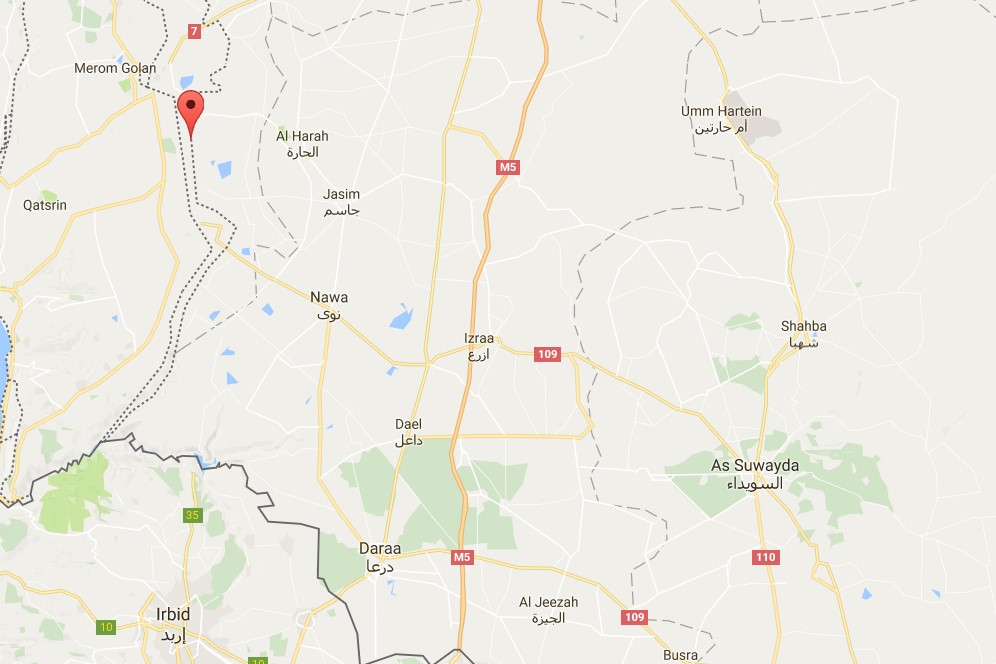 If reports are confirmed, this will be another sign of the growing Israeli military activity over the ongoing Syrian war caused by a series of success of the Syrian-Iranian-Russian alliance against ISIS across the country.

On September 7, the Israeli Air Force carried out a missile strike on a Syrian military facility near Masyaf town located west of Hama city in central Syria. The strike allegedly hit a weapon depot at the medium-range ballistic missiles plant located in the area. Some pro-Israeli sources speculated that a chemical weapons plant became a target of the strike.

At the same day, Israeli Defense Minister Avigdor Liberman said that Israel is ready to do everything to prevent a Shi’ite corridor from Tehran to Damascus and to defend own interests in the region.

Israel increased its military and media activity over the Syrian war after Tel Aviv had failed to get a Russian support in an attempt to influence the US-Russian negotiations aimed at reaching a final settlement agreement over the conflict in Syria.

The Israeli media even accused Russia of providing a diplomatic cover for Hezbollah in the United Nations Security Council.

Tel Aviv is deeply concerned over the collapse of ISIS in Syria and Iraq and fears that the Syrian crisis could be solved in a way ignoring a major part of Tel Aviv’s “interests” in the region.

This clearly show once and for, which side Israel is in favor of.

… We didn’t need any more evidence. You think Israel is a “good” nation – Check out the USS Liberty Attack, look into Mossad’s role in 9/11, and of course, look at what remains of Palestine and the conditions they force those they subject to live under.

“People who call themselves supporters of Israel are actually supporters of its moral degeneration and ultimate destruction.” ― Noam Chomsky

my roomate’s step-sister makes $82 every hour on the internet . She has been fired for nine months but last month her check was $16437 just working on the internet for a few hours. you can try this out

A whole 200 meters deep huh, someody has got to be kidding here. I watched my less than 3 year granddaughter act the same way yestersay. They need to get some grownups in the control room over in Israel before it is too late.

if it was the other way around, Syrian troops penetrating Israhell…. bombing targets in Israhell…

This will be the Greatest GIFT for PALESTINE !

So Israel has just entered yet another part of the Syrian Golan? With permission from the Syrian government? NO. So they have to all intents and purposes invaded another part of Syria in violation of international law and UN resolutions. What about an emergency meeting of the UN security Council? What about Russia putting forward a UN resolution calling for the Israelis to vacate the invaded area? How about President Assad lodges serious protests at Syria being openly militarily entered? So nothing can/will be done you tell me. Maybe not now, but lets wait patiently as Syria is reclaimed step by step. The day will come when justice will be done and international law upheld – one way or another. The day when Syria will be whole once more including their oil rich territory of the Golan. I look forward to that day especially for every dispossessed and ruined Syrian and in memory of their 400,000 or so dead. All at the hands of the USA, UK, Israel and NATO

Roll on Syria – for the icing on your cake. Golan.

The Paulstal Service
Reply to  Bru

They’re all paid a salary- where is all that money coming from? Where did all the tanks, weapons etc etc. come from, without a billions and billions of dollars Isis couldn’t exist. The fact alone that they “appeared” so quickly, in one of the most inhospitable places on Earth and suddenly had such deep pockets should have alarmed people.

Isis of course never attacks Israel, even though they supposedly border Israel on the East and South.. No SVBIEDs, not one missile launched into Israel, nothing. Isis just “clears the way” for Israeli expansion in the region.

Why is Israel trying to stop this war in Syria from ending?

because if Israel deems you a threat to it, no matter how true that is, you’ll be genocided and your country destroyed.

No single country in history has ever been cause for so much war, destruction and unhappiness for such a long time.

They had only one good administration in their history, one that was truly interested in putting an end to war and chaos and that was clever enough to understand that you can’t live in a permanent state of war.

Of course, that prime minister got shot and killed by a rightist israeli party terrorist.

…and the Likudniks STILL managed to blame the Palestinians for his death.

how? the terrorist shot him during a public event and was caught immediately.

How do you blame the palestinians for that?

The good thing was that president rabin was a previous terrorist so at least he tried to make amends.

Because they started it in the first place. Current outcome is that they loosing this war and they don’t like it this way.

Was the UN , “Observation Force” , not created to prevent just such excursions , or at least report on them to the UN ?

UN protection force was always a wolf dressed in sheeps clothing.look at UN forces actions draped in shame at nicosia airport cyprus 1974.they wanted to gift it to turks to put icing on cake of kissingers plan of partitioning th island.sorry canada…not a honorable day in your history!

What the fuck are those IDF soldiers wearing on their heads? Looks ridiculous…

That’s what I’m often trying to explain – hystory is going to repeat itself if humanity doesn’t wake up :) Jew’s rabbys are leading their chosen people to the sloughter once again and terrible thing is that Jew’s (majority of them) are blindly fallowing as they did during their famous 40 year Sinai tour. Many don’t realise what was the aim of that tour :)

That little boy on the right looks like he’s about to hurt himself… Someone should take this dangerous toys away from him before it is too late.

Right! And his boots are kingsized. He will occasionally stumble downstairs the tank. The zio behind the zio at the left is stealing something from him. Typical behaviour.

So dogs of war let slip ro protect investments of neocon clique in golan.murdoch the zionist in there as well.yes i know he is australian but he is jewish through moms mom.

I see these little boys are still wearing the “mitznefet” (yes it’s Hebrew for clown hat) which is supposed to reflect the sun or moon so they are less observable to protesting civilians armed with rocks and slingshots. These parasites feeding off of Uncle Stupid in Washington, DC need to face an opponent that has tanks, aircraft, a navy and fights like hell. Then the world will see how great this bunch of arrogant, evil Zionists are. Their trillion dollar arsenal couldn’t even defeat Hezbollah in 2006.

A total of 119 IDF soldiers were killed in this war. Two soldiers were seized at the border to visit a Hezb prison and 44 civilians paid with their lifes sitting in a foreign country as an invader. Fine times in July/August 2006. Please go on Hezb.

Damn that pestilential ghetto sewer. There will never be peace in the Middle East until Israel is destroyed.

Israeli refugees failed on planning all groups of terrorism in Syria.

Israeli refugees failed to expend their boundaries in the Middle East.

Israeli refugees failed in their planning to grab homes from Syrian and Iraqi nations and sell them on high costs to earn high profits.

Israeli refugees think that instead of living in refugee camps why not to live in best homes in best places in the Middle East.

israHELL is nothing but a bunch of wild animals, evil minded, born when Satan sat on a toilet bowl, and israelis zionists came to the world ! Poison Creatures ! Inhuman as we see the way they act with other nations, calling Arabs Rats, (they saw their own face in a mirror) !

Map which shows the country of Palestine and the future Israeli refugee camps.

2. For the last 70 years these Israeli refugees have harassed, tortured and brutally killed hundreds of thousands of Palestinians. They have demolished and still demolishing their homes and grab properties. Therefore, 50% Palestinians have left Palestine and now living in camps outside Palestine.

3. Under these facts it is obvious that America and Europe don’t care of human rights and regularly financing and arming Israeli refugees against Palestine.

The Israeli media even accused Russia of providing a diplomatic cover for Hezbollah in the United Nations Security Council…what a joke…just what does the US do in regards to Israel? What a load of…

US, what he do, gives Trillions $$$ to israHELL, and supports WARS for this Terrorist state, not good enough….

Fuck of you zionazi bastados

Who are they with? ISIS in golan, or one of the various other pro Israel militias?

So Israel just conquered more Syrian teratory. Seems no Russian weapons in Syria were able to inflict even a single papercut on a Zionist-invader. Russian weapons are useless against superior-Zionist who are superior to Russians in every way. Russia better watch out, cause all of Europe and USSA are Zionist, and Russia has nothing in it’s arsenal that can scratch let alone harm a Zionist-solder. http://stop30billion.org/

Is it only Israel and USA which can violate other countries sovereignty.

The aggressor is now taking off his mask to reveal the ugly violent character within . .