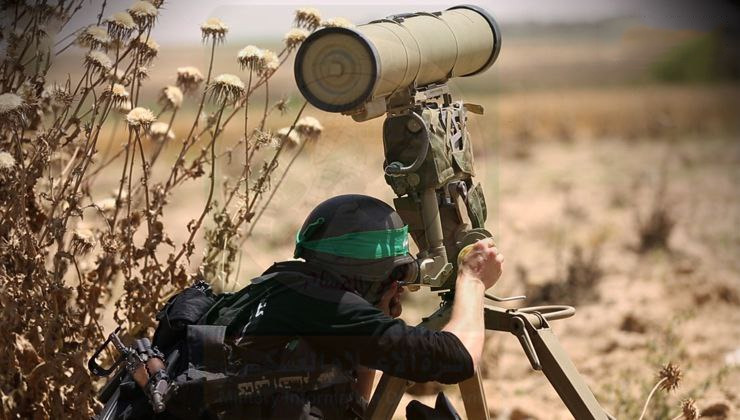 On May 20, a bus of the Israeli military parked near a base in the village of Zikim, to the north of the Gaza Strip, was targeted with an anti-tank guided missile (ATGM).

The attack was carried out by fighters of the Izz ad-Din al-Qassam Brigades, the military wing of the Hamas Movement. In a statement, the group said that several mortar shells were fired at the vicinity of the targeted bus after the strike.

According to a number of Israeli news sources, a soldier was slightly wounded as a result of the ATGM attack. The bus was severely damaged.

Hamas ATGM attack near Zikim struck a soldier’s bus, the bus was empty and one soldier nearby lightly wounded in the attack. pic.twitter.com/OXCTJbNUIl

The Israeli military has been hunting down Palestinian “tank hunters” since the outbreak of the battle in the Gaza Strip on May 10. Yet, ATGMs are still being fired from the enclave.

This was the third such attack. The first attack, which took place on the first day of the battle, targeted an SUV east of Gaza. A civilian was wounded. The second attack, on May 12th, targeted an SUV of the IDF to the north of the enclave. One soldier was killed and two others were wounded.

Palestinian attacks on Israel have claimed the lives of 12 people, including at least one soldier, so far. More than 100 others were injured.

Despite much talk about a near ceasefire, the fighting in the Gaza Strip is not slowing down.  A number of issues are complicating the ongoing ceasefire talks, which are being run by Egypt and Qatar.

Very clever taking out an empty bus. What a waste.

It was obviously a military transport vehicle – all military services use a lot of buses to move personnel around. That was potentially a very serious incident for IDF – if it had been fully loaded with soldiers.

The bus was empty so it was not moving. So it was possible to see that it was empty and wait until soldiers started to climb on and do some real damage rather than end up with a bus that needs some repairs and someone else with a headache .As I said , what a waste.

yeah this is 5th time they hit an ’empty’ bus.

No evidence of explosion – Show us the REAL bus please IDF

There will probably be a ceasefire soon.

What would a ceasefire mean? Israel wins and can continue its evictions, thefts, blockades, etcetera.

And this will have been all for nothing. Same ole same ole.

The conditions for the ceasefire are that Israel stops the land theft and ethnic cleansing. If Israel continues on with the Sheikh Jarrah house theft, then the rockets will continue to fly at Tel Aviv; and the world will know more and more about the Israeli genocide of Palestinians. Israel already lost control of the narrative.

The ceasefire is mutual and unconditional. That is NO conditions of any kind included those suggested by you that were part of the deal. Wishing for doesn’t make it true. Hamas lost. They fired thousands of rockets and killed 12 Israelis. No planes were shot down , no helicopter’s were deleted , no tanks blown up and destroyed not even an armored vehicle scratched and apart from a bus that needs some panel beating sweet FA else was done or achieved by Hamas. In return Gaza lost a number of high rise buildings causing hundreds of families to lose their home, 230 killed , hospitals already short of supplies overloaded with injured , infrastructure damaged causing more misery for the people of Gaza and in return they get a little bit if sympathy from a few people around the world. Now we also have to put up with that idiot Iron Zion gloating about how many times he wanked in excitement as more misery was rained upon the ghetto of Gaza. All this happened so that arsehole Bibi can stay in power and not get kicked out so he can go to jail where he belongs.

It’s gotten so bad that Israelis have to manufacture resistance; I bet they show this to their own people. this has all the earmarks of israeli lies: expensive weapons used on cheap targets. Zionist jews not only lie to the world, they lie to themselves.

I would have thought if one of those had really hit the bus then the bus would have been a pile of scrap and all the windows blown out at least. Who knows what the truth is as after all the first casualty of war is the truth.