The Israeli Minister of Education has threatened that Israel will hit civilian facilities of Lebanon and send the country “back to the Middle Ages” if Hezbollah launches its missiles to the Israeli territory. 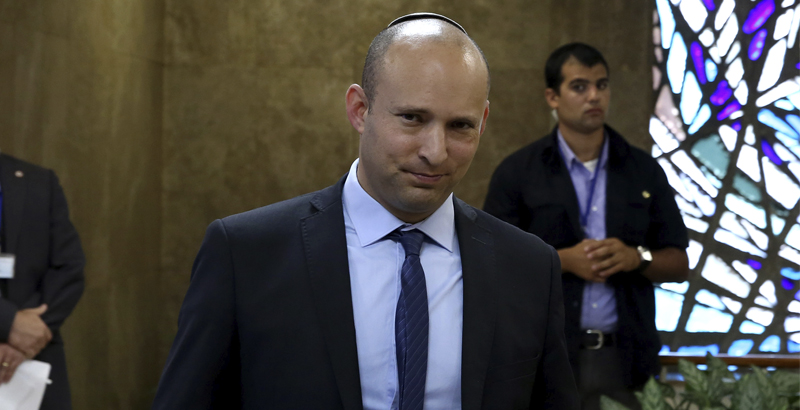 Instead of trying to isolate and liquidate Hezbollah units the Israeli Armed Forces will attack Lebanon’s infrastructure, including army’s and civilian strategic facilities, and send “Lebanon back to the Middle Ages,” the Israeli Haaretz newspaper reported on Sunday, citing the country’s Minister of Education, Naftali Bennett. The move is going to be considered in the case of usage missiles against Israel by Hezbollah.

“If Hezbollah fires missiles at the Israeli home front, this will mean sending Lebanon back to the Middle Ages,” Bennett said, noting that it is almost impossible to target rocket launchers during a war, as Hezbollah deploys them in a very sophisticated manner.

“The Lebanese institutions, its infrastructure, airport, power stations, traffic junctions, Lebanese Army bases – they should all be legitimate targets if a war breaks out,” Bennett said. “Life in Lebanon today is not bad – certainly compared to what’s going on in Syria. Lebanon’s civilians, including the Shia population, will understand that this is what lies in store for them,” he added.

According to the minister, targeting of civilian infrastructure will accelerate the campaign, as the international community will intervene in it faster. “That will lead them to stop it quickly – and we have an interest in the war being as short as possible,” he said.

At a recent meeting of the Knesset Committee on Foreign Affairs and Defense, Israeli Defense Minister Avigdor Lieberman also said that in the case of a war, not only Hezbollah facilities will be attacked.

“We have become witnesses of bellicose statements made by Lebanese leaders, including President Michel Aoun,” the Walla information portal quoted his words. “The Lebanese security forces did not prevent attempts of riots on the border with Israel. From our point of view, the Lebanese and Hezbollah infrastructures represent a single whole.”

Earlier, in February, Israeli Minister of Transport and Intelligence Yisrael Katz also said that Tel Aviv can strike “all Lebanon” if the Shiite organization launches missiles on the territory of his country.

“If Nasrallah [Secretary General of Hezbollah] dares to bombard the Israeli home front or our national infrastructure, we will carry out a strike on all Lebanon,” the TASS news agency quoted the words of Katz.

According to Katz, Nasrallah “grovels before Iran and indulges it so much that he is ready to provoke a complete destruction of Lebanon for his master’s sake.” The minister also called to “apply severe sanctions against Hezbollah and put heavy pressure on Iran” in order to make the country “to stop to supply weapons to this organization and finance it.”

“It is necessary to destroy this axis of evil – Iran, Syria, Hezbollah and Lebanon,” Katz said.

Last month, in a series of interviews with local media, Lebanese President Aoun ruled out a possibility of outside pressure to disarm Hezbollah, noting that the group’s operations “complement the actions of the army and do not contradict them.”

“They are a major part of Lebanon’s defense,” Aoun said. “As long as Israel occupies land and covets the natural resources of Lebanon, and as long as the Lebanese military lacks the power to stand up to Israel, [Hezbollah’s] arms are essential.”

But some in Lebanon want to send Israel back to the Stone Ages.

and they will this time! No crying for a UNSC resolution and ceasefire!

Maybe they still desire revenge over the thousands of civilians murdered by the Chosenite filth in 2006?

This war will be interesting to see, as the new wave of conservatism in the US and Europe will have to chose Christian and Muslim Lebanon or “Only democracy in the middle east” Israel.

i think they forgot the war in 2006, in the coming war the earth will be cleansed from Zionist pigs:)

You mean he looks like those who served in Franklin Roosevelt’s cabinet and Stalin’s cabinet and Churchill’s cabinet right? When they initiated the global world order of evil-Zio-globalism we are all now stuck with today. Adolf made the mistake to think that he could liberate India and Finland and Iraq and Iran and Egypt from the occupying forces of the Zio-UK-empire Zio-US-empire and Zio-USSR-empire and Zio-French-empire. In the end Nationalist 100% lost the war (except in India) And the Zionist won world domination.

Hmm I wonder who Adolf was liberating France Poland and the Baltic states from oh I know his own special brand of genocide..

The French suffered no Genocide from the European forces. But when the UK and USSA Zionist conquered the ethnic-French people in 1944, they immediately implement policies to ensure the French would forever loose control of their own lands within 30 years, and face complete genocide within 100 years. This was the UK’s plan all along. Of course, you know they had already murdered Joan of Arc in cold blood, and millions of other loyal tribal French as well. The UK-Empire had been working on ethnically cleansing indigenous French for 1,000 years.

Hezbollah is far stronger than they were in 2006 while Israel is about the same. I’m sure this is just rhetoric and the Israeli leaders aren’t suicidal enough to attack Lebanon.

You didn’t read the article at all, did you. He said that IF Lebanon attacked Israel’s civilians, which they’ve done before, Israel would fire back. And as Lebanon stations its launch sites among civilians as Hamas do, infrastructure will naturally be hit, as well as sites such as the airport which would also weaken the offensive against Israel.

Wrong, he never says attacking “Israeli civilians”, rather he clearly says attacking Israeli “civilian infrastructure”, those are two different things. A power plant is a civilian infrastructure but not a civilian. Furthermore this is a response to Hezbollah’s earlier remarks regarding Israeli targets that would be hit in case of an Israeli attack on Lebanon. As usual Israeli apologists’ time-line starts from the point that it suits Israeli interests. In reality however there is one event prior to the point where you want to start the clock.

Hezbollah said they would target Israeli infrastructure in case of an Israeli attack on Lebanon, now Israel responded saying they would destroy all of Lebanon in case of such an attack.

Based on Hezbollah’s history of attacking civilians, we can safely assume that they’re referring to hitting civilians. Just like Hamas.

In both wars between Hezbollah and Israel, Hezbollah started it. Israel responded.

You accused me of not reading the article properly now you say we should “assume” what the Israeli official meant as opposed to what he actually said. Anyways, as I said before your event time line starts from the point when Hezbollah/Hamas did something and you ignore everything that has happened before. In reality however Hezbollah and Hamas almost always respond to a previous Israeli action which never gets mentioned in your media.

For example Israel currently illegally occupies part of Syrian territory. This is officially recognized by the entire international community including Israel’s own allies. However if Syria attempts to retake its occupied land which is has every right to do so you will claim Syria started the conflict completely ignoring your own multi-decade occupation which is the root cause of the isue.

We can easily assume based on what we know of Hezbollah’s weapons deployment tactics. They actively put citizens in the line of fire, Israel do not.

In my media? In no media more like! Merely existing as a state is not a previous action that warrants an attack.

Syria illegally invaded Israel. They fought for territory and lost some of their own as a result, a result which they deserved for their stupidity. Such actions are how borders have been determined since the beginning of time, so legality is an irrelevance, particularly considering that this would not have happened had Syria not tried to invade Israel. Twice. Israel have had that territory for twice as long as the Syrians ever had it, so it’s theirs.

‘My own’? I’m not Jewish, I only defend them on this because they’re absolutely in the right.

If HEZBOS start a war, they should be sent back to the dark ages, not the middle ages, because that implies they are civilised to certain extent. Which they obviously are not!

Its Israel that needs to travel back in time to that age, not lebanon

Typical lying Zionistani jew animals… Hezbollah will only launch rockets if the Chosenites attack Lebanon, yet the eternal victim-Jew once again lies to Gentiles to gain advantage as per the Talmud.

A dirty, despicable, selfish, racist violent, greedy people. The world will celebrate when they are no more.