The IDF added that the incident is under investigation.

On September 5, the IDF launched its largest drill since 1998, with tens of thousands of troops staging a mock 10-day war against Hezbollah amid the growing influence of Hezbollah in Lebanon as well as Hezbollah and other Iranian-linked Shia militias in Syria.

The exercised was named “Or HaDagan” and included physical actions and maneuvers by foot soldiers, land vehicles, naval vessels, helicopters and jets. The Israeli military’s cyber units were also set to be involved in the exercise simulating the “cyber arena”: engaging in electronic warfare and defending its networks.

The exercise will end on September 14. Someone’s been watching too many youtube vids of flying Russian tanks and getting stupid ideas.

Yeah, well, that’s what you get for designing a slow moving bunker.

Another culture that is afraid of casualties and relies exclusively on technology and clumsy weapon systems for self defense.

Not wanting to send out personnel in poorly protected vehicles is not a bad thing though. Making them slow moving and way too heavy is. Speed, obfuscation, good tactics and a proper strategy to actually win wars in the shortest possible times are probably better then a slow moving bunker. The Germans tried that route in WWII with the Tiger tank series, and it didn’t win them the war.

The perfect type of tank as a target for Hezbollah.

In 2006 yes, however we must assume that the IDF took lessons of that war to compensate. After all, they did after the 1973 Yom Kippur war. Victory breeds complacency, defeat on the other hand teaches harsh lessons. I wonder and hope Hezbollah has not let its game slip.

Kornets ATGM would be a good and inexpensive way to kill Merkavas. The latest version has a kill range of 10kms.

Hezbollah in 2006 turned the merkava into burnt toast and destroyed lot of Abrams tanks and used the parts to fix theirs and gave some US equipment to the Lebanese Army, back then.

from 400 were destroyed 20. 8 of them with 3-500 kg bomb traps. so, poor result. and in that time they had no active defense. the low effectivity of kornets show also the fact, that israel lost only 30-35 tank servicemen.and fullfilled all points of plan.

if you are happy from destoying 12 tanks with kornets, then you ar BIIG, BIG, BIG loser :DDDDDD

fid a girl boy! and dont compensate here tha no woman want you.

no way. merkava 4 from the beginning, 2 and 3 already updated to activ defense system. kornet is ineffective. not only russia has this sytem on newer tanks. ;)

Hopefully the Syrians will retake their occupied land.
Not to do so is a sign of surrender and weakness which is a recipe for more war.
One hopes peacefully through international law and the UN.
If not, I trust there will be a lot more damage than a flipped tank and 3 injured.

it’s fake news. no israeli battle tank can possibly flip. Jehovah will always be there to avoid such incident. they are god’s choosen people. right? 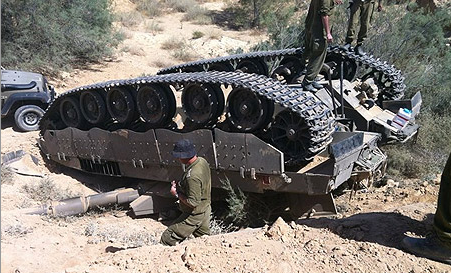 Was the tank driver looking at his Facebook page ?
Either way its good news.

There was another picture of a Merkava trying to jump the embankment alongside the road it didn’t make it and bent the Gun and turret landing front first.

Time for new funding from US tax payers for provisioning million dollar escape hatches (each) from belly of junk! sic

Tanks are so last century.