According to the newspaper, Russia threatened to veto US and Israeli moves against Hezbollah as the UNSC weighed extending and expanding a mandate of the UN Interim Force in Lebanon (UNIFIL).

The Russian side allegedly pushed to remove “the direct reference to Hezbollah as conducting prohibited military activity in southern Lebanon that is in violation of Resolution 1701.”

As a result the UNSC unanimously voted to renew Resolution 1701 last week but only after the US and Israel had agreed to remove paragraphs that were critical of Hezbollah.

The US-Israeli attempt to use the resolution to put an additional pressure on Hezbollah in southern Lebanon failed.

Haaretz linked this with the Russian involvement in the ongoing Syrian conflict where Moscow sided with the Assad government, Tehran and Hezbollah in a battle against ISIS and al-Qaeda.

The UNIFIL patrols Lebanon’s southern border with Israel where Hezbollah has a strong presence. The US and Israel describe Hezbollah as a terrorist organization.

The UNSC discussion over Resolution 1701 followed a meeting between Netanyahu and Russian President Vladimir Putin in the Russian city of Sochi where the Israeli prime minister was attempting to bargain with the Russian leadership over the future of Syria. The Israeli leadership is concerned over the growing Shia influence in the country. However, it seems Netaniyahu failed to gain a Russian support over this issue.

the illegitimate entity is a sore loser …. syria and her true allies had won …. love it or go to hell zio satanic terrorists

Lol, Ispuerile is going DOWN!

Yes I am all for condemning Hezbollah, because Israel would follow all UN mandates, yes ?…s
The …s, means sarcasim

No more Goyim blood for the the defence of israel

Israel complaining about arms trafficking and influencing other governments is a laugh. Since when does Israel give a rats ass about the UN and it’s resolutions? Did they respect UNIFIL when they attacked Lebanon in ’06? They’ve been crapping down both pantlegs whenever Hezbollah is mentioned ever since Hezbollah kicked their ass.

strange, that country ( based on the recent deportation of native inhabitants and an ongoing apartheid ) has been supporting terrorists in Syria, incl. trrstment in hospitals and bombing the Syrian army,
whereas the Hezbollah has been fighting these very terrorists…

great Russia is not giving in to evil people.
as for the evil country, all its evil deeds against neighboring countries ( wars against Irak, terrorism in Syria…) backfire against it…

I am sooooo upset that Israel is upset that I had to sit down to contain my laughter :)
As Americas power wanes, so will that of the thieves and child killers of Israel.

Funny how when Goebbels controlled German newspapers and other media it was considered totalitarian but not any more. If the zionist press gets any more servile, people might mistake it for the British corp-0-rat media.

Thats right .They now call such media Establishment media or to make them sound real good eg ” a newspaper of record” impying its honesty is above suspicion.eg Times in UK/ Us .yeh right i will believe you!

Worried about Shia influence when they have Salafists on their doorstep that they don’t seem to care about!!

heydad
Reply to  Will Holland

Well said. They don’t seem to care about the ISIS pocket on their occupied border. Another astonishing fact is that the only presence and situation that sees isis expanding instead of being defeating is in area adjoining to Israel. Very alarming facts if you asking anyone with a logical viewpoint.

Will Holland
Reply to  heydad

I know eh? Because of Israel, I think the Jaish Al Walid pocket (ISIS) is still around and has not been destroyed.

They are providing weapons and medical treatment for their Spec op forces called Jaysh al Wahlid why else wouldn’t they as they will push in behind them to steal land.

If Russia is providing diplomatic support to the Hezbollah, I am happy with that as the Hezbollah has proved to be a real support to Syria in fighting the terrorists and by the same token is a garanty for the independance of the Lebanon.

“ISRAELI MEDIA ACCUSES RUSSIA OF PROVIDING DIPLOMATIC SUPPORT TO HEZBOLLAH IN UN SECURITY COUNCIL”…That is the utmost CYNICISM, when it comes from the ones who are PROVIDING, FUNDING, MILITARY AND TRAINING SUPPORT TO THE INTERNATIONAL MERCENARY TERRORIST.

Russia should consider removing its political support from Israel.

So… what is your problem my dear friend ? or do you have mental problem ?

So how would anything positive ever get accomplished by pretending the opposition doesn’t exist? That’s an essential part of our ‘bleeding ulcers’.

The UN is a hotbed of political activity, if Hezbolleh is willing to engage over a table, that’s better than it engaging with a gun so why not at the UN? Look what happened when the PLO got official status – the killing stopped.

Hezbollah are the good guys.
Israel is in violation of at least 17 major UN resolutions. Including the refusal the sign the Nuclear Non Proliferation Treaty! Israel will not sign, cause they know they plan to nuke Goyim’s in Europe and America and ME with nukes, and they want to say ‘we never agreed to not nuke non-Zionist’
http://realjewnews.com/

What we are witnessing is the collapse of the entire Israeli foreign policy for the last forty years. The funding and support of ISIS by Qatar and Turkey is now gone; The ability for the Saudis to fund foreign Wahhabi adventures for the Israelis is coming to a close. I give that two more years, max. Syria is ten times stronger than it was before Israel and the neocons set this crisis up. Hezbollah is five to ten times stronger, having had training by both Iran and Russia. Iran is perhaps twice as strong, now that it has Russian weapons and strategic cooperation. The zealots are going to need a scapegoat. Netanyahu is going down. The problem is, he represents mainstream Israeli opinion. To take down Netanyahu is to discredit the entire Israeli enterprise. Israel is on the path to implosion. Make no mistake about it, we are witnessing the collapse of the neocon agenda. It is not here yet, but the ability of Israel to control US policy will evaporate as the neocons are discredited. Events are moving much faster than Israel and the neocons can control, and events continue to turn radically against both of them, as the alliance of Syria, Iran, Russia, and Hezbollah keeps getting stronger. It is evident now that the Kurds will either agree to rule by Syria or they will lose their territories in battle, and in either case, US and Israeli control over those territories via the Kurds is going to be gone in two years. It does appear that the Israelis and Americans have been checkmated; I see no effective moves on the board for them. Whether they fully realize it or not remains to be seen.

Very well presented and reasoned.I hope all you have said comes to fruition.

I do not agree with “The problem is, he represents mainstream Israeli opinion. “, as I believe that many more of the citizens are dismissing his agenda now.

For me, Netanyahu has somehow taken Israel out of he realms of common logic and further out of International law and as the US, managed to alienate almost every other Country and certainly a high proportion of he World’s population. This is not just about Palestine, but maybe more about their shear war-mongering madness in the name of defence ….. I am struggling here as I find it difficult to explain, so I shall grab a couple of your comments and repeat them back – “I see no effective moves on the board for them. Whether they fully realize it or not remains to be seen.”

Too little, too fast, too loud and it is coming back to haunt them.

Dear Red Tick, I wish I shared your optimism about mainstream Israeli opinion. The problem is that moderates, that is, Israelis with two dendrites to rub together, realize they live in a theocracy that is also fascistic as well as practicing apartheid, and they leave. What is left are the people who are just fine with the way things are, although like everyone they will whine about their government. No, Netanyahu represents mainstream Israeli opinion, and if they scapegoat him, only someone with a similar political position can presently be elected there.

Unbelievable!!…I have read every comment so far and agree with everyone of them ! I cannot comment on each so all i will say is exactly!! Too bad ,so sad …warmongers!!!

Jesus the Messiah killers are complaining after ISIS goals were destroyed by Hezbollah and Syria.Hezbollah even help Lebanon and give amnesty to the terrorist who surrendered. But USA prevents their freedom to avoid credit going to Hezbollah and Lebanon.Israel hand is full of Syrian blood.Stupid terrorist supporters. 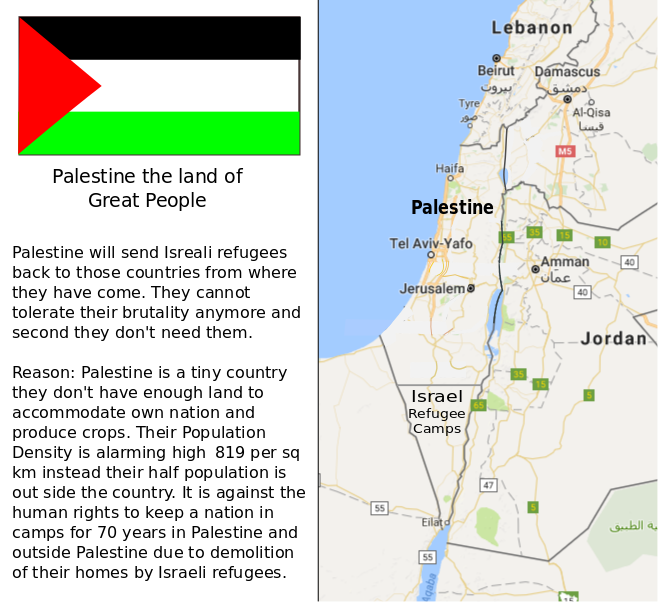 Map which shows the country of Palestine and the future Israeli refugee camps.

2. For the last 70 years these Israeli refugees have harassed, tortured and brutally killed hundreds of thousands of Palestinians. They have demolished and still demolishing their homes. Therefore, 50% Palestinians have left Palestine and now living in camps outside Palestine.

3. Under these facts it is obvious that America and Europe don’t care of human rights and regularly financing and arming Israeli refugees against Palestinians.

Satanyahu, mind your f..king business; Are you so scared of Hezbollah and Russia together! Yinnon Plan is RIP; Give back Palestine to the Palestinians. Screw. The International Jewish Supremacy!

GFY Ziostani scumbags… you will all die, choking on your own blood.

This is pathetic. A Bulgarian journalist Dilyana Gaytandzhieva has exposed massive arms trafficking using diplomatic flights (can’t be checked) on Silkway Airways flights all over the world over several years. And Bibi complains about “alleged” arms trafficking in Lebanon. How about we ask what is Israrel’s involvement with Silkway Airways illegal arms deals?

Unfortunately this operation with Silkway Airways is still ongoing and has not stopped.

I have got to the stage now, where I no longer try and rationalise their behaviour. Netanyahu wouldn’t consider the Russian fatalities before asking Putin to betray their memory as martyred patriots, he would have gone to Sochi thinking that he had an offer impossible to knock back because basically he is disturbed by a strong malaise which is a mackintosh figure appearing at his bedroom window with a sickle in on hand and a hammer in the other, then my informants in Heaven tell me, he sees Poland in the 1920’s the barricades Pious the V11 making a speech and then Katyn, very sad but hay, only a fool would mess with Stalin, I never did and never would.