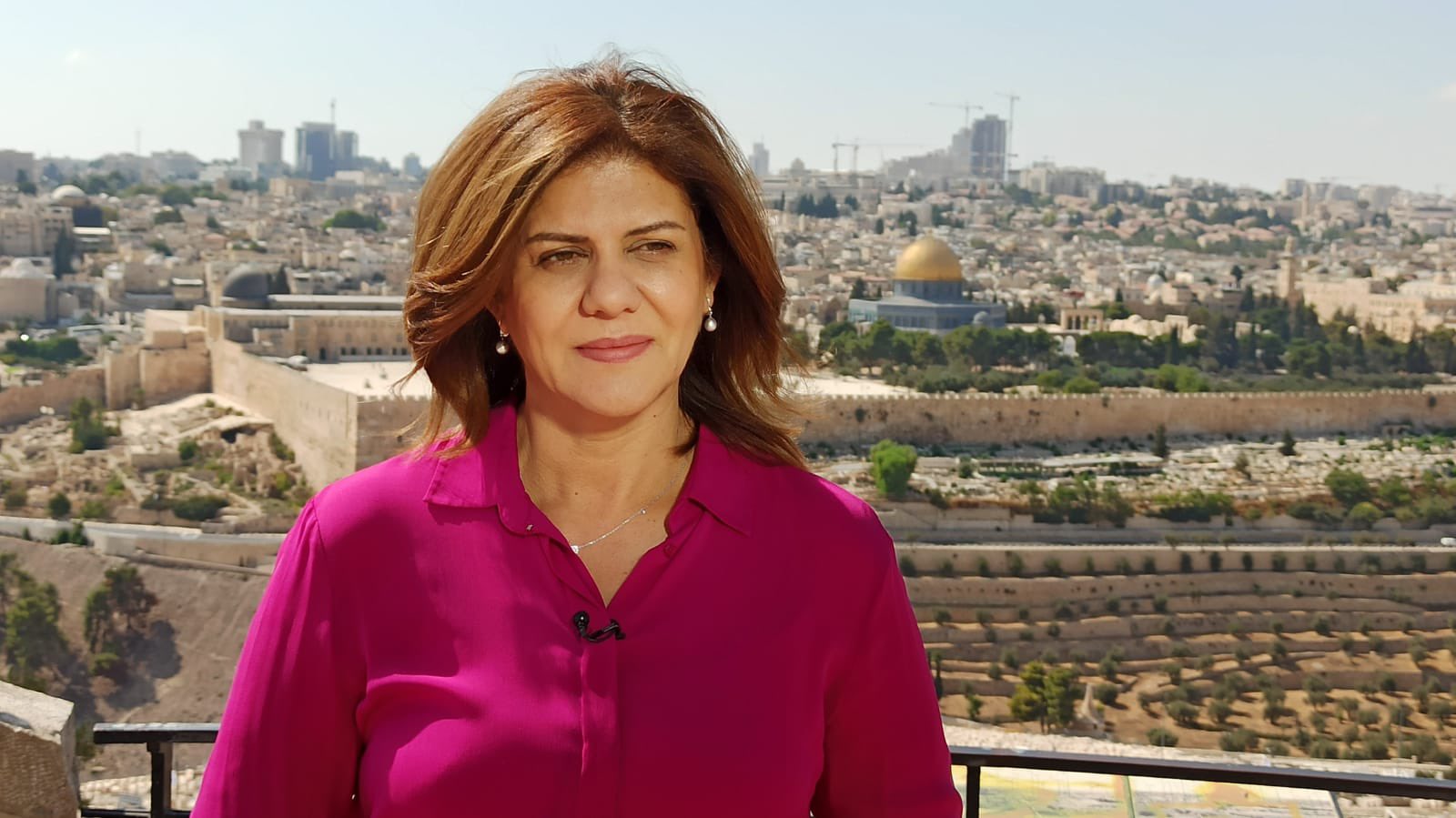 On May 11, Israeli forces have shot and killed Al Jazeera’s journalist Shireen Abu Akleh in the occupied West Bank, according to the Palestinian health ministry.

Abu Akleh was reportedly hit in the head by a live while covering Israeli raids in the city of Jenin. The Palestinian-American journalist was rushed to a hospital in Jenin in critical condition, where she was pronounced dead shortly.

Another Al Jazeera journalist, Ali Samoudi, was also wounded with a bullet in the back while covering the raids in Jenin with Abu Akleh. The journalist is currently in a stable condition.

Both Abu Akleh and Samoudi were wearing distinctive blue press vests and helmets. The journalists were shot while standing with other journalists.

Samoudi and other journalists at the scene told Al Jazeera that no Palestinian fighters were present nearby when the incident took place.

“We were going to film the Israeli army operation and suddenly they shot us without asking us to leave or stop filming,” said Samoudi. “The first bullet hit me and the second bullet hit Shireen … there was no Palestinian military resistance at all at the scene”.

The Israeli Defense Forces (IDF) shared a video of a Palestinian gunman opening fire at Israeli troops in Jenin to shift the blame for the incident. However, B’Tselem, an Israeli organization that document human rights violations in the Israeli-occupied Palestinian territories, confirmed that the footage were taken far away from the place where Abu Akleh and Samoudi came under fire.

Abu Akleh was one of Al Jazeera’s first field correspondents, joining the network in 1997. She became well-known as a reporter on the network’s Arabic-language channel, especially after covering the Second Intifada.

Al Jazeera described the killing of Abu Akleh as a “horrifying crime that breaches international norms” and was committed “in cold blood”. The network’s managing director Giles Trendle stated that the network was “shocked and saddened” by her death and called for a transparent investigation.

Mahmoud Abbas, President of the State of Palestine, stated that he considered Israeli forces “fully responsible” for Abu Akleh’s death. From his side, the US Ambassador to Israel, Tom Nides, called for a “thorough investigation” into the killing of veteran Al Jazeera journalist Shireen Abu Akleh.

Israeli Minister of Foreign Affairs Yair Lapid said that Israel is ready to launch a joint investigation into the death of Abu Akleh with Palestinian authorities in the West Bank. However, he stressed that Israeli forces will continue to “operate wherever necessary”.

The killing of Abu came following a series of Israeli operations and security incidents that claimed the lives of 28 Palestinians. The Israeli crackdown on Palestinians intensified after a wave of attacks that left 19 people dead in Israel and the West Bank.

I say we use Nato to cripple commies, and then take over Nato by ridding it of jews and phaggots, by Christian Soldiers.

YOU DUMB CRACKER TRANNY FAGGOT. THERES NO COMMIES LEFT EXCEPT IN FUCKHOLE AMERICA.

Yes let fuckhole america cripple commies how about that?

Zionists are pure evil and if you look at the world, any place that is in conflict has Zionism behind it. The world and humanity will never see peace or justice until the Zionist cancer is eradicated. RIP to Shireen Abu Akleh for her bravery in exposing Zionist crimes.

nato and “commies are jews.

Guess Israel arent so smart using hard force and enforcing policy we dont talk to our neighboors. What if suddenly Western Influence fall in the Mediterranean and then Israel would be surrounded by Arab Powers and Countries just like ancient and medieval era… then Israel would be in real troubles.

Would happen if the monarchs aren’t Jews themselves

If it’s bad or degenerate then yes it’s most likely Jewish.

On the other hand, your dung brown hellenic whores are cumdumpsters for everyone from western europe to the middle east to even sub-saharan africa (and have been for thousands of years).

Gayreek shitskin micropenises are small and all gayreek statues from antiquity prove it. That is why Albanians come to your shitskin country every summer – to pound your whore women. No surprise that so many hellenic shitskins have an Albanian grandfather or great-grandfather.

The truth is that the Australians are whores. Greeks have big dicks. Albanians are mostly Greeks.

Australia isn’t known for sex tourism – gayreece is and all colours and shades of men travel to shitskin hellas to pound brown hellenic whores who give up their mongrel pussies for the price of a newspaper, kek.

And no, Albanians have way more light-haired/light-eyed people than shitskin hellenic wogs so no, they are not gayreeks. In fact, the few blondes and blue or green eyes you do have in your country is thanks to Albanian jannissaries raping the local christcuck whores in the ottoman era.

Chris Gr Hitler was a Jew. Just like you are a TURKISH WITH TURKISH DNA BY YOUR OWN ADMISSION BUT YOU SO HYPED UP AND PRETENDING TO BE A GREEK

Notice how the isreali apartheid regime has stepped up its attacks on Syria just as Russia deal with nazis in Ukraine? The isreali regime is part of a bigger regime. It’s the arsehole of 5 eyes so will backed to the hilt. The region has notoriety because ports all along the coast were used by the crusaders to invade the whole region. The crusading nations never did get over letting it all go. The NWO now have a race of isrealis to replace the crusaders. They will do the NWO bidding in the east whilst nato will do it everywhere else. The jewish lobby used a world war to get their promised land, and they will use the next to expand that land into their ‘greater isreal’.

Now just change the “state” to Russia and location to Donbas and you see two very different reactions from the West. It really shows who is fuking the EU and US. It is also not the first time ofc, these Zion have been killing civilians and kids ffs for years with the FULL support of the West.

These radical Kurds of PKK have fought against Israel in the past. lol

George Soros is against Israel and supports Palestine. Just saying.

But I’m very interested in the low IQ tripe you comment because I get to call you out as a retarded shitskin, which you are.

Shitskin mongrel gayreek, your skin is the colour of my shit and you know it. Even my pubic hair is longer than your hellenic micropenis.

I’ve travelled to your shitskin country and fucked your whores. All of them complained that the average gayreek has a short little pecker.

Concentrate on your own country, hellenic shitskin. Turdkish worse 🇹🇷, porkis 🇵🇰 and shit tons of other darkies are fondling and plowing your whore women on the beaches of your shitskin nation.

You are probably Icarus Tanovic. Your Turkish and Pakistani friends are beaten everywhere.

Funnily enough, the only times they are confronted, it’s an Albanian challenging them, not some gayreek pindick monkey.

They recorded something they shouldn’t have, most likely

No, this was just typical “Jewish lightning”.

The one the Islamic Yahoo freaks from the West Bank thought was an IDF soldier? The terrorist cockroaches filmed themselves admitting that they killed her. They were wearing a go pro. That’s why Abu Abu didn’t want any shared autopsy. Southfront’s incitement of terrorists won’t distract anybody from the calamity Putin created.

This is exactly why “Death to Israel!” is such a popular phrase in most of the world.

lol at the video from the “Israeli foreign ministry”

Is this what passes as “evidence” in the zionist state? – A 15 second video that is clearly edited and doesn’t reveal the location of where it was filmed in relation to where Shireen was actually killed. Classical American and Israeli way of using the words such as “likely to” as justifications for stuff like invasions, sanctions and murder of people.

That's Squatters For You

So after all the whoring Al Jazzera does on behalf of the squatter scum, they still go ahead and blast one of their journalists to death.

This is a war crime and an attack on journalism from the North Atlantic Terrorist Organisation (NATO).

Israel has been tolerated way past any standard of normalcy, it’s time for the state of Israel to disappear.

We will neutralize more if they collaborate with Hamas. We cannot tolerate terrorists pretending to be journalist. If I was that patriot I would have finished off the second terrorist collaborator too. Israel will deal with all its enemies 🦾🇮🇱

That’s all you’re good for, shooting the unarmed. You government stopped the Israeli March after Hamas threatened to shoot at them, like pussies you did what Hamas told you to do

Hamas has been carrying out these attacks unchecked and brown rape baby shitskin kikeroaches like yourself are still waving their micropenises online, making impotent threats.

You’ll be meaning that desert demon yhwh and Navi Moshe Shitskin very soon. He’ll analize you with his “magic staff” like a sand monkey.

Australian women like Greek and Jewish dick in fact.

Go tell your perverted fantasies to someone who cares, monkey shitskin gayreek.

In reality, your hellenic sluts get their shitskin pussies stretched out by arabian 🇸🇦 dune coons and porki 🇵🇰 pajeets for both Euros and to experience a longer dick (since hellenic shitskins have infantile micropenises).

Yes, Australian women like Greek dick. So do you. But I am not a fag.

Shitskin, I was a sailor and visited gayreece and fucked your whores when we docked. They complained all the time that gayreeks have tiny needle dick cucksticks…there was even a joke among gayreek hookers about ethnic gayreek customers – “3 inches, 3 minutes and 300 Euros”, KEK.

Confuckingratulation, shitskin shmuel. Her fellow countrymen are going to run around knifing and axing more of your mutt-faced kikeroaches/cuckroaches in retaliation and I cannot wait.

Boy, I live this intra-sandmutt darkie war. I’m backing the habibitches, though – lesser evil and whatnot. Hope the palestinian wogs kill a newborn kikelet this time; best shitskin hebrew mongrel infants are the best ones.

The juden ARE rabid dogs and the entire world KNOWS this.

THIS MUDER WAS SANCTIONED BY UK MI6 ,CIA AND MOSSAD JUST SEE HOW THE zio Christian west HAS LEPT IN DEFENSE OF zionist ENTITY STATE TERRORIST

there is no being lower than these satanic rats

by now everyone ought to know the IDF aka idiot dumb fools,are psychopaths and cowards

USS Liberty, ISIS, 911 and Epstein to nme a few. The zioNUT PARASITE SLIME should be removed from this world by ANY means necessary.

Another murder by the isreali apartheid regime. Add her name to the list of thousands. One day the ICC will operate normally.

Israel is in the Land but out of God’s will. As God’s rebellious firstborn son he is in the place of the dead. He is defiled having touched the dead body of Messiah. As The wife of Jahovah she is a harlot having defiled herself trafficking with the Gentile nations during the last two millinia. Her time to be back in the Land is yet ahead. BUT only after she is brought to the place of repentance. Such has not yet occured. How? She is to be driven back out among the Gentile nations to be punished thus affecting the necessary repentance and salvation.