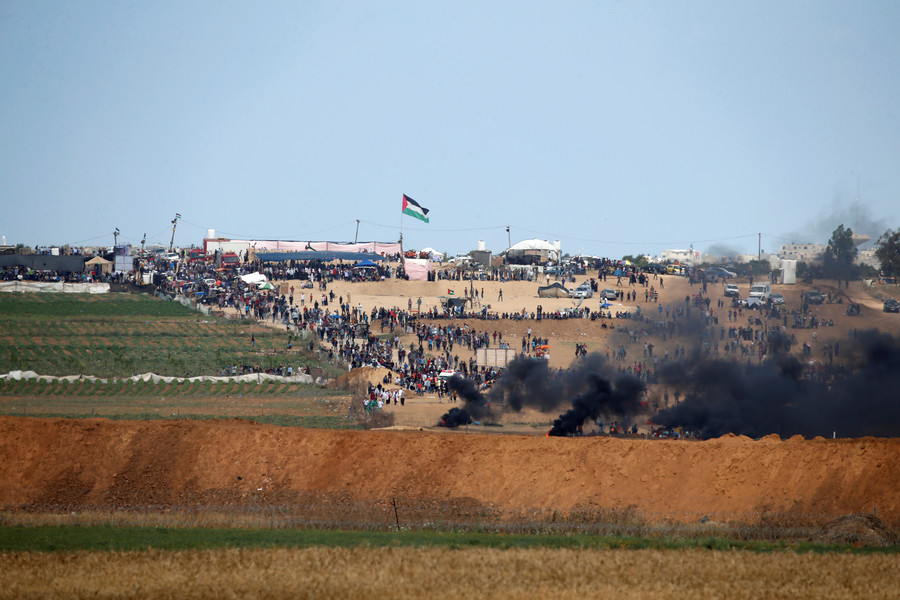 UPDATED 4: 52 Palestinians have been killed and over 2,400 have been injured.

UPDATED 3: According to the updated info, 43 Palestinains have been killed and over 2,200 have been injured.

UPDATED 2: 41 Palestinians have been killed, over 1,700 others have been injured. The Palestinian government described the violence as a “terrible massacre” perpetrated “by the forces of the Israeli occupation”. It also called for an immediate international intervention to prevent further deaths.

UPDATED: According to fresh reports, at least 38 Palestinians have been killed, over 1,600 have been injured.

18 Palestinian protesters have been killed and over 900 have been injured by Israeli forces ahead of the US embassy inauguration in Jerusalem, the Palestinian health ministry said on May 14.

Over 35,000 people are protesting at the border fence, according to the Israeli side.

The Palestinians have gathered to demonstrate over the US embassy relocation to Jerusalem. The US Embassy will be opened in Jerusalem at 4pm local time. More than 1,000 Israeli police officers will be working near the event, which is expected to be attended by a US delegation represented by presidential advisers Ivanka Trump and her husband Jared Kushner.

US President Donald Trump formally announced the United States recognition of Jerusalem as the capital of Israel on December 6, 2017. The move has triggered an escalatino of the Palestinian-Israeli tensions.

At the same time, the Israeli Air Force’s aircraft struck alleged Hamas military posts near the Jabalia area after Israeli troops had been “fired upon from the northern Gaza Strip,” the Israeli Defense Forces (IDF) said adding that no IDF soldiers were injured in the incident.

At the same time, the IDF has deployed reinforcements along the Gaza Strip and the West Bank in the anticipation of a possible escalation and attempts to penetrate the security fense in the run-up to Nakba Day on May 15, which commemorates the Palestinian exodus that occurred as a result of Israel’s declaration of independence in 1948.

The DUTCH GOVERNMENT IS OPENING THEIR EMBASSY IN JERUSALEM BECAUSE THERE WEREN’T ANY PALESTINIAN RIOTS!!! IS WHAT THESE LYING SNAKES ARE TELLING THIS ON TV..

wich fake news did you read this time? only De christenhonden unie and the even worse SGP wants this, fucking christian imbecils

Well it was on the Six O’ Clock News…. yeah you are right this time…. stupid of me to believe it…

oh yeah? wich one, today? NOT TRUE, it was mostly the usual village holland news, except a topic on the violence in gaza by the israeli militairy

Yesterday… but in fact I don’t give a Damn… Because my Dutch Government are Jewish Assmunchers… they get paid by Bibi..

you need some love i guess (just like me, but i have a daughter at least), i guess most of us here are sad wankers

EUREKA! Yeah thanks… that is it! I need LoOVE…. You would make a Great Head-Doctor….I always knew something was missing….

http://www.informationclearinghouse.info/49432.htm Do you see any west Europe on the map??

Nigel Maund
Reply to  MADE MAKER

This is thinly disguised GENOCIDE! ……They would be very happy if they could wipe out all Palestinians without any comebacks or accountability!! It’s simply appalling!

as
Reply to  Nigel Maund

As well as the war on terror.

Nigel Maund
Reply to  as

Agreed!….. If there is a God there will be justice!

as
Reply to  Nigel Maund

People themselves need to wake up. Just like police brutality against certain ethnicity. You’ll have to ask yourself when that gun barrel directed at yourself. USA is ripe for balkanization and the only country that can launch such operations against them is Israel.

Israel has been practicing this even before they formed the Apartheid Organization.

Mr. Putin should decide that he wants to ally with the Muslim world which includes 52 Muslim states covering the regions of Asia, Africa and Europe or he wants to ally with the gang of US, UK, France and Israeli migrants the child butchers. Israel have migrated from Europe mostly Briton and have invaded Palestine and now kidnapping and butchering small kids from the streets. The Israeli migrants have taken their homes and now Israel not let them to live in the tents and burning their tents by drones.

The Muslim world needs a trusted friend to support them and rescue them from the gang of US, UK, France and Israeli migrants. Together they will stand and divided they will fall.

US sanctions every country in the world but no country have sanction the US and Netanyahu as*ses. I think their as*ses have immunity to sanction. US, UK, Israeli migrants using UN for their own personal goals. There is no benefit from UN to the rest of the world.

The evils US, UK and Israeli migrants are security threats to the whole world communities because they have attacked many nations and butchered them there and the remaining nations they have held hostage.

US, UK, France, Saudis and Israeli migrants have attacked Palestine, Syria and Yemen and have held hostage these three nations there. Now this is responsibility of Turkey, Lebanon, Jordan, Egypt, Iran, Pakistan, Russia, China and all other sensible Muslim nations that should send their TV news anchors and leaders to Palestine, Yemen and Syria to know about them that what kind of help they need and how to rescue them from brutality of West.

There are now many hostage children that are dying due to starvation, disease and poisonous drinking water. They have sealed the complete areas of these nations and have held them hostage. In each Kilometers there are checkpoints and observation towers of these gangs. These leaders should consider these kids like their own children.

What is Trump going to say about his buddy Netanyahu?? His reply will tell us what he is REALLY about.

as
Reply to  Rex drabble

Einstein said that insanity was doing the same thing over and over and expecting different results.

That’s why Trump moved the embassy ? What do you think of them ?

I was referring to violent protests against Israel.

They’re nonviolent until Israel started it. So what’s your alternative ?

Either you don’t know the first thing about this conflict or you’re lying. I’d prefer to believe the latter.

State your own version of the first thing about this conflict and I’ll make my point.

Of course you would. What self respecting Zionist A-hole wouldn’t? Just continue with your propaganda BS, it’s what is expected of you and your ilk. Your version of events bear no resemblance to reality, it just adheres to the continued official Israeli line of lies. You know, BS stories like Israel’s attack on the Liberty was all an accident. Only brainwashed idiots believe such crap…all Israelis know better.

You Israel Firsters are what’s wrong with the US government and military walking and talking treasonous seditious traitors who should all be line up in front of a firing squad!

You mean how Israel always reacts so predictably brutally that each time more people around the world stop buying their oppressed victim bullshit?

“Attempting to ignite fires in IsraHelli territory” Wtf. ALL of this territory IS PALESTINE.

as
Reply to  Russie Unie

Obama did quite well making the pretenses that USA is good to foreign although he’s scorned domestically. With Trump all pretending have stopped and the USA along it’s propaganda machines have shown it’s truest color. Mirror to that their vassals as well have stopped trying hard to fool it’s own citizens (the skripals and Syrian war). What’s more appalling is the lack of resistance towards full blown military conflict against nuclear superpowers China and Russia (especially European).

Wow.. and we thought Hillary becoming president would have been bad..

Trump much better. He sucks at lying and his ego too big to be contained.

Turbofan
Reply to  as

“Trump much better.” Really? Because…..

Yes both were the worst kinds but Trump isolated themselves much more faster. His ‘tough’ talking and stance does work for the better good against himself.

Israel is one of the smallest UN members, with over 100 resolutions for their crimes against them. More than any other member by far that I’m aware of. It never should have been admitted in the first place. It was the UN’s biggest mistake that they’re still trying to correct 70 years later. The current crimes against the Palestinians illustrate why Israel should be delisted from the UN and replaced with Palestine.

Fat chances. UN HQ need to move before anything can happen.

Today on Monday 14th May, 2018 the US president Trump moved US embassy to Jerusalem. Israel are not only thieves but their friends are biggest thieves than Israeli migrants. Now there is no Sanction no attacks on these thieves and butchers. How many countries will condemn this act of these thieves US and Israeli migrants. Shame on all Muslim nations particularly on Turkey, Pakistanis and Saudis the sons of pigs. They have sold their dignity and religion to the US, UK and Israeli gang.

Palestinians are “violently” protesting US/Zio “peaceful” raping of UN charter and of the whole post WW2 International Legal System – impertinently and aggressively slamming their skulls against IDF sniper bullets, triggering Gaza Death Camp guards to shoot more live ammo into unarmed civilians. Palestinians are “clearly violating the Peace Process” – process of Israeli land theft and murder that is supposed to be conducted without the victims objecting to their fate, i.e. going to the slaughter “peacefully”. I bet Nikki Haley has already prepared blown up photos of IDF soldiers trigger fingers full of blisters, demanding from UNSC a binding resolution that will force those pesky Gazans to shoot themselves and charge their families the cost of bullets

Why Palestinians not stage a “Chemical attack” to attract west attention?

as
Reply to  Thomas Wolsey

They don’t have to. Israeli use both Drone and CW on them.

Where the hell is the UN on this. ANY other nation would be looking at sanction and threats of military reprisal! Why is Israel treated with impunity.

The World can see what is going on. Slingshots v sophisticated military and armaments. This is nothing but MURDER!

Yes and by human right standard they should launch barrage of cruise missiles to their capital.

Don’t worry. Trump and Putin will stop the genocide. they are Christians. You know “religion of peace, …” XD.

It’s very obvious that everything is fake. Nothing can be true with abraham followers and abraham lovers.

The world was a paradfise until “god” was created.

I noticed how it works : by humiliation.

Iran was again rigfht when their ayatollah says that israel wants humiliated countries as slaves. That’s 100% right. An humiliated personn is basically dead.

Also, israel humiliated Arabs by supporting sunnis extremists and forcing them to destroy and burn their countries or be corrupted idiots who spent their money in prostitutes and soccer.