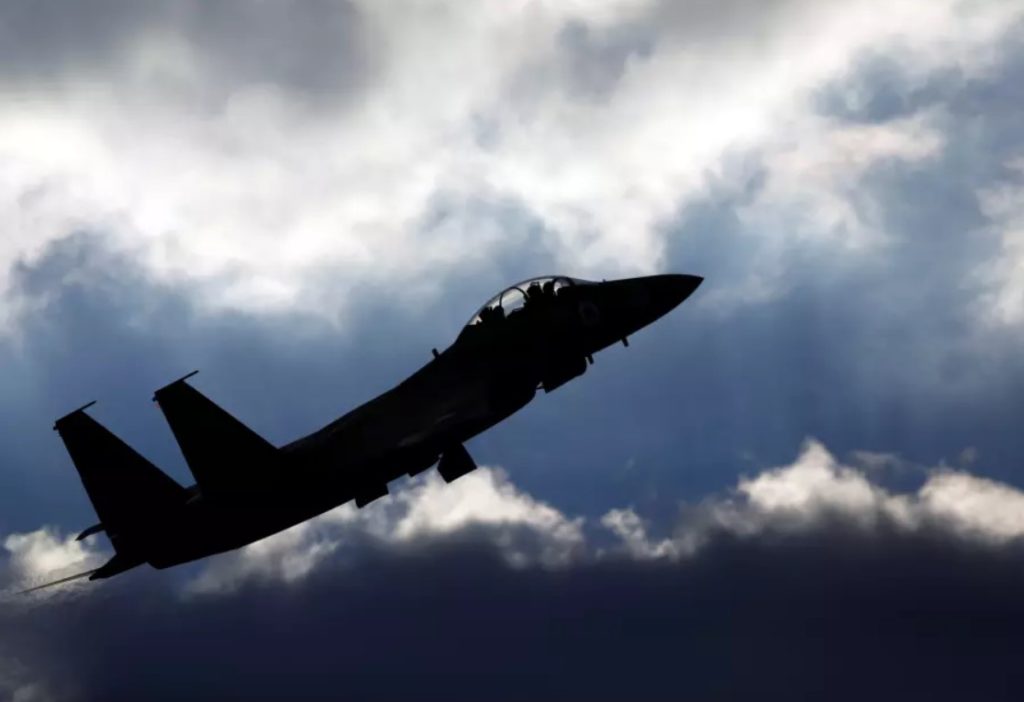 Last night, the Israeli Air Force conducted airstrikes on what it described as “major terror infrastructure” in the Gaza Strip.

“In response to the 3 rockets fired at southern Israeli communities throughout yesterday from Gaza, IAF fighter jets targeted a significant terror infrastructure in the Gaza Strip,” the Israeli Defense Forces (IDF) said in a statement. “The IDF will continue and will proceed with all the tools at its disposal above and below the ground to thwart attempts to harm Israeli citizens. We are prepared and ready for a range of scenarios and we will act against every attempt to violate Israeli sovereignty.”

According to reports, southern Israel was shelled with 3 rockets on January 3. However, mortars and rockets caused no damage or injuries. The shelling hit Eshkol Regional Council located close to the Gaza border fence. Reports also emerged that the fourth rocket was launched from Gaza on the same day. However the IDF did not report this incident.

According to the released statement, Iranian intelligence recruited Maharma, a computer engineering student from Hebron, to carry out attacks against Israel and conduct espionage missions in the West Bank on behalf of Iran. Maharma was allegedly recruited by his relative Bachar Maharma living in South Africa.

“As part of the attempt, Bachar met with Muhammad in South Africa three years ago and introduced him to Iranian handlers, some of whom traveled from Tehran to meet with their recruit.

After meeting with the Iranians, he was instructed to recruit more operatives and to carry out a series of attacks against Israelis, including a suicide bombing and shooting attacks. He was also offered to learn how to handle and assemble explosives and to take part in weapons training.

During the investigation it was discovered that Iranian intelligence has been using South Africa to identify potential recruits and operatives to work against Israel in the West Bank.

He was also asked to recruit an Israeli Arab as well as other Israelis, such as journalists, who have access to various official places in the country.

According to the Shin Bet, Muhammad successfully recruited two Hebron residents, Nour Maharma, 22, and Diaa Srahana, 22, to form a terrorist cell. For his efforts Muhammad Maharma was paid $8,000.

It was uncovered that the plan was for Muhammad to open a computer store in the Hebron area and to use it as the central intelligence gathering base for the operation and to send pictures of the store to his handlers and his cousin Bachar in South Africa.

He was also tasked with transferring an Israeli SIM card and both Israeli and Syrian currency to his Iranian handlers, possibly to fund an attack to be carried out within Israel’s borders.

He was indicted on charges of contact with a foreign agent, receiving funds from an enemy entity and conspiring to form an illegal organization.

The two recruits were charged with attempting to join an illegal organization. Bachar is believed to still be in South Africa.”

The security agency’s statement came shortly after the IDF announcement about the rocket attack from the Gaza Strip.

On the same day, Israeli forces shot dead a Palestinian teenage boy in the central part of the West Bank during clashes in protest at US President Donald Trump’s recognition of Jerusalem as Israel’s capital.

17-year-old Musab Firas al-Tamimi sustained serious gunshot wounds during a demonstration in the village of Deir Nidham, located bout 23 km northwest of Ramallah. Al-Tamimi died from the wounds in a hospital.

BULLSHIT,and blatant lies once again from the satanic regime, looking for any excuse to carry out their genocidal agenda.The Synagogue of Satan.

Yet these LIES are carefully repeated here to give them more weight. Southfront is supposedly an outlet on OUR side, yet of late has been pushing zionist propaganda lies like crazy.

Did any of us think the zionists would sit on their hands, when they can have their ‘VOLUNTEERS’ offer to work at outlets like Southfront (in disguise, of course). Billions of dollars each year are spent by Israel, France, the USA and UK to subvert sites like Southfront- and the no.1 method is to get an agent embedded in the editorial body- influencing coverage of events.

They’re not even trying to be subtle about it.

dont know about the rest but the bad wather and santa was made by iran they have developed their own weather control weapons…only mulfuction is that randon santas spawn during use.

Then this Iranian-made weather control weapon must be a reverse engineered one, otherwise it should spawn a “Haji Firooz” instead of Santa! http://iranianuk.com/db/pages/2012/03/14/019/zimg_001_18c.jpg

What’s a Haji Firooz? Well, Because we Iranians are a very politically-incorrect nation, it’s just a guy in blackface playing a tambourin, dancing and singing “arbaab-e-khodam” in the streets, usually spawned in numbers before Nowrooz. Here’s a link if anyone’s interested https://en.wikipedia.org/wiki/Hajji_Firuz

And Southfront refuses to even cover the story of jewish atrocities against non-jews in Palestine, or even mention the name of Ahed Tamimi!

I tell you an old Israeli joke I read in Richard Silverstein’s (anti-occupation Jew) blog:

“Three spy agencies, the FBI, KGB and Shin Bet, had a contest: who could be first to capture a fox in a dense forest.

The first fox was released. Tens of FBI agents entered the forest with helicopters and sensors. Within four hours they returned with the fox.

The second fox was released. The KGB sent ten agents with eavesdropping equipment and within three hours the agents returned with wide smiles on their lips and with the fox in hand.

The third fox was released. Two Shin Bet agents wearing sunglasses entered the dark woods. After two hours they came out with a squirrel: “Under interrogation, he confessed he was a fox!”

Here’s the link to the article itself: https://www.richardsilverstein.com/2017/12/28/shabak-always-gets-man-even-hes-innocent/

More of the SAME- A Meeting in the last couple of weeks of December with Washington and now New Years Riots in Iran and now arrests of Iranians involved in a “major terror infrastructure” in the Gaza Strip.

Yeh ,sure and I just bought myself a home on Mars, with a beautiful Lakefront.

Looks to me WAR against Iran is getting VERY close, so I hope Iranians are prepared.

Can’t have war on Iran without even outlets like Southfront spewing anti-Iranian propaganda.

Recall the run up to Tony Blair’s invasion of Iraq? Even sites that PRETENDED to be on our side agreed that Saddam had WMDs.

Southfront could be covering the vile nazi atrocities against non-jews in palestine this Xmas carried out by jews with the FULL APPROVAL of all major jewish bodies across the planet. But when the TRUTH is ‘anti-semetic’, organs like Southfront don’t want to say it. Google Ahed Tamimi- a young girl with far more courage than Putin.

It is difficult to tell now who is a limited hang-out, or worse

lol.. they should test the water with Hesbollah first.. then only they can dream about attacking Iran..

Notice, now everything will have Iran in this and that. So obviously rubbish

Anyway if it’s true so what as though Istarl doen not have agents in Iran ,Lebanon or Syria.

Nothing serious These guys just have no creativity to create something new. So obviously stereotype

No wonder they lose Everytime in Syria

And notice how Southfront spews these zionist lies, yet ignores acts by jewish terrorists across Palestine over Xmas. Where’s the Southfornt story on Ahed Tamimi, for instance. Oh wait, exposing her treatment by jewish nazis in Israel would make the jewish ’cause’ look bad- and Southfront can’t allow that.

NutNYahoo’s government is beating it’s chest hard and strutting around like a Peacock now that the US has come out of the closet on Israel. The only thing about that is that everyone knows that when Israel and the US government speak, it can all be safely looked upon as more BS to justify their criminal behavior on the world stage….. Pathetic!!!

The JEWS and their LIES by Martin Luther 1478. He would be horrified about is accurate description of their character trait. They lie about everything! 2the 6,000,000 ” killed in “gas ovens”.??? The Palestinian Holocaust begun in 1947 and continues right before our eyes. The cameras roll whilst crimes are being committed but, the sadistic/bloodthirsty IDF soldiers do not care if they being filmed. UN gives Israhell a green light all the time, allowing to break resolutions since 1947???? War Crimes not being brought before ICC.

Interestingly the ‘six million’ dead jews was actually a propaganda lie from around WW1 pushed by an infamous zionist propagandist. After WW2, his propaganda lies (and everyone agrees he was a LIAR) were taken out, brushed down, and rewritten to apply to the period of WW2 instead.

But then this trick of using an older plan worked with 911 too. Tony Blair and co simply took OPERATION NORTHWOODS from the 1960s, crossed out CUBA, and pencilled in Afghanistan/Iraq/Libya/Syria/Iran and activated the false-flag so described for real.

Jewish TERRORIST propaganda pushed on Soutjfront AGAIN- the zionists that have infiltrated Southfront and gained editorial control are really doing their job, aren’t they.

Meanwhile we are STILL waiting for Southfront to cover the story of Ahed Tamimi- and what the jewish nazis are doing to here and her family. By the way, did you know that the original nazis also infiltrated media outlets in the 1930s, and supressed coverage of their crimes, while seeking to have Germany painted as ‘victim’- just as we see Southfront painting Israel as the ‘victim’ in this article.

PS jewish company Intel, with its main base in Israel (tho the real engineering is done by Indians), has just been exposed a having built INSECURE and BROKEN CPUs for more than the last TEN years. Have an Intel CPU in the computer you are reading this comment on? Well you now need an emergency fix to partially mitigate the security holes built in by Intel. The fix massively slows down most forms of serious computing- destroying Intel’s FAKE lead over AMD. AMD’s new Ryzen processors are now fully proven to be vastly better than anything Intel offers.

Intel finances much zionist terror across the world, and Intel was responsible for sabotaging Iranian nuclear centrofuges- since Intel hardware exploits were used to communicate with the devices and make them malfunction. So this massive Intel broken CPU story is relevant here- but hell will freeze over before the current editorial body of Southfront allows it.

PS how many times does Southfront have to spit out pro-zionist propaganda LIES before we all start to distrust this site and its agenda- yet the fix is oh so simple. Find the new Southfront recruits, identify their activity pushing zionist lies- and use this FACT to expose them and boot them out of the editorial body.

against every attempt to violate Israeli sovereignty…! Hahaha..! It’s just a huge squatters on an illegal land of Palestine.. and it’s just a matter of time (and counting) to be demolished..!