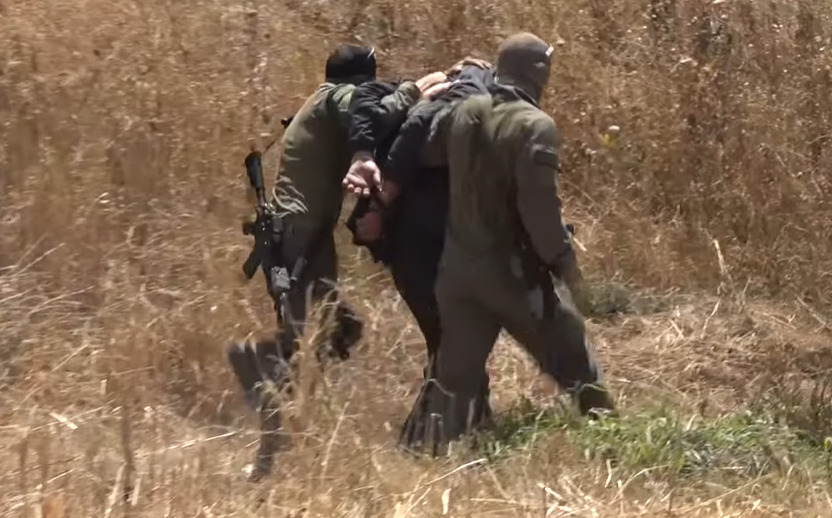 Screen grab from the footage released by the Israeli Police.

On May 8, Israeli forces arrested two Palestinians suspected of carrying out the recent deadly attack in the central Israeli city of Elad.

The two Palestinians, As’ad Yousef As’ad al-Rifa’i, 19, and Subhi Emad Subhi Abu Shqeir, 20, are accused of hacking three Israelis to death with an axe in Elad, a majority ultra-Orthodox city. A knife was also believed to have been used in the attack.

The Israel Defense Forces, Shin Bet security agency and Israel Police announced the arrest of the two suspects in a joint statement.

The two suspects, both from a town near Jenin in the West Bank, were reportedly arrested in a forested area near Elad. Before hiding in the forested area, the suspects were reportedly taking shelter in a local school. During the arrest al-Rifa’i admitted to security forces that he committed the attack with Abu Shqeir.

The arrest of the suspects was welcomed by Israeli Prime Minister Naftali Bennett, who praised the work of security forces.

“We are at the beginning of a new stage in the war on terror… You cannot throw a match and escape,” the premier said at the start of the weekly cabinet meeting. “The Israeli government’s top mission is to restore personal security to Israeli citizens.”

The deadly axe attack in Elad was the most recent in a series of attacks in Israel and the West Bank which claimed the lives of 19 people. The attacks were a response to an Israeli crackdown on Palestinians in Jerusalem and the West Bank.

Israel, which is running out of security options in Jerusalem and the West Bank, has recently turned its eyes to the Gaza Strip. Tel Aviv has reportedly threatened to assassinate the leader of the Hamas Movement, Yahya Sinwar, in response to the recent wave of attacks.

Way to go Israel! let’s hope they violently beat a confession out of these Muslim cunts and made them piss their pants like the pussy little cowards they are. Hopefully now they will go after their families and slaughter them like squealing pigs then burn down the Mosque they worshipped in!! I look forward to seeing the pics of them drowning in their own blood!! Allah fucking Akbar you vile shit-stinking Islam goat-fucking niggers!!!

Simmer down, shitskin hebrew. You’re no less of a dung brown turd and so far, these palestinian wogs are killing you mongrel sandmutts like neutered beagles.

Tel Aviv is Faggot Central in that desert shithole region for buggery and child molesters. They even have annual marches with that rainbow flag each year to celebrate how much they like being bumchummed.

P.S: Navi Moshe was a shitskin and I’d have anal-raped him with his own magic staff.

Tel Aviv? I thought southfront had no agenda

Of course I support Israel and I have genes from Asia Minor not Mongolia.

Nothing is better than lett the HasbaRats expose them selfs, always a good thing, despite their pre-pubertal rethoric and their ability end with drooling something about genitalia, yeah, nothing new.

But hey, ISISrael is always right, and Palestinians always the terrorists, and somehow, nobody writes about what happens on an day to day basis against Palestinians, in Gaza or the WBank, destorying farmland, destorying live stocks, uprooting hundreds of years old olive trees, to confistcaing land, while the setlers are attacking people and takes over the land, everything to ethnicly cleans whats left of Palestina, scums suported by rats like Abamovich, etc. Yup, nobody cares.

Talibans should arm the Palestinians