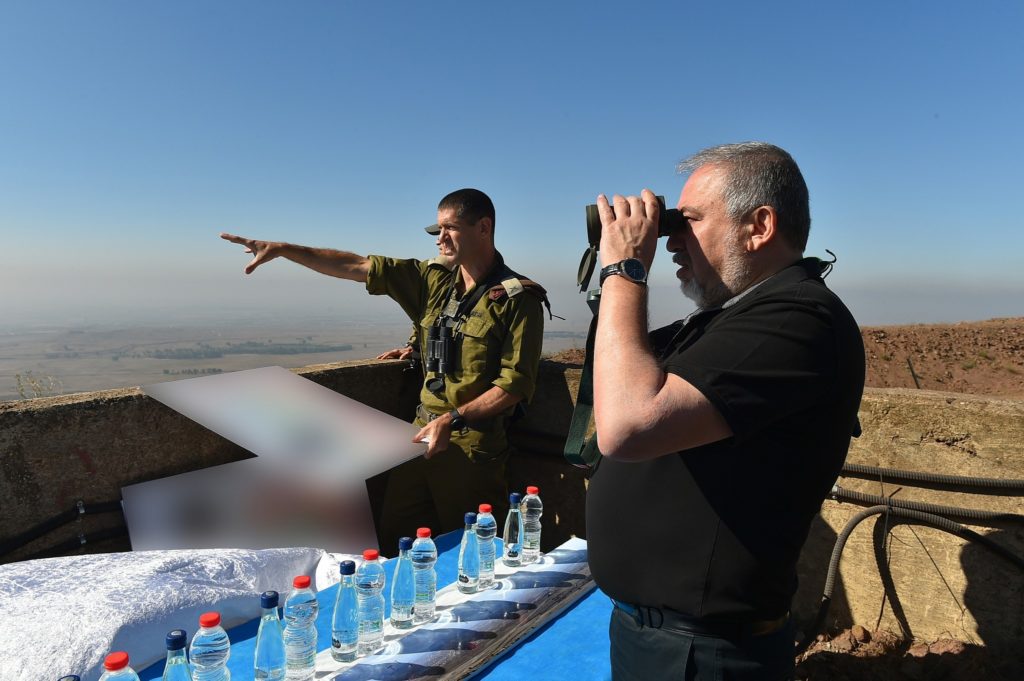 In a rare example of admitting the current reality on the ground in Syria, Israeli Defense Minister Avigdor Lieberman has said that his country does not rule out re-establishing some ties with the “Assad regime” in the future.

Lieberman made his new remarks during a visit to the Israeli-occupied Golan Heights on July 10.

“I reckon we are a long way from that, but we are not ruling out anything,” Lieberman said when asked whether Syria and Israel will be able to establish “some kind of relationship.”

“For our part, we will sanctify the 1974 disengagement agreement and there too we will insist that every last letter be abided by, and any violation will meet a harsh response from the State of Israel.”

Returning to a common Israeli rhetorics, Liberman once again warned against “the Iranian presence in Syria” claiming that Israel would respond “with force” against forces of its regional competitor in the war-torn country.

As an active phase of the Syrian conflict is coming to its end, Israel is forced to make steps to admit the reality. Tel Aviv’s actions in support of radical militants in Syria have not led to a collapse of the Syrian government, but have triggered an expansion of the Iranian influence – ties between Damascus and Teheran strengthened drammatically during the conflict.

Bashar has only one message for israel: boom-boom-boom!

and never make peace with them as they always lie. hopefully their lies are catching up with them, they are fakes in every possible way

Screw the Zionist state of Israhell

I’m sure the Syrian Minister of Defence Major General Ali Abdullah Ayoub will reflect on UN Security Council Resolution 497 and demand that IsraHell withdraw from it’s illegal occupation of Golan. Once that is completed Syria will open lines of communication. That is, tens of columns of Syrian troops will be sent to liberate Palestine with their allies the PLA and Liwa al Quds.

Well that will be nice, but so impossible to see it happening, it’s just can’t be you must destroy the Zionists state or cripple it down then you can get the golan heights back otherwise the zionists will strorm everything what they have on anyone coming to the buffer zone, the Golan’s, for them it must be occupied because thats a big buffer zone that is far from their original border, and that gives them a long way in atvantage behind their borders, if Zionists don’t have the Golan’s everything will happen right on their border, and the threat will be bigger much bigger, but this way they have a lot of place buffered between the real border and Syria and that’s the Golan’s occupied zone. Its much better for them, to add their tanks and shit on Golan’s than just all that happens inside in their country on the border. But one day the Golans will be back to Syria, what didn’t kill you will make you stronger, what doesn’t destroy you , will make you much stronger than ever before and you will arise much powerful.

No need. Just send the Houthis to take Golan

Well you mean the Real Yemeni army as just asked for help from the tribal militias.

One day. Syria needs much better military capability. Probably should think outside the box and develop weapons programs with their allies.

Well once Syria takes care of it’s domestic enemies and get’s in a position to start dealing with their foreign sponsors – chickens*it air raids through Lebanon and Jordan airspace will get appropriate response. So an alternative mode of communication will be in Israel’s best interest…

Only one tie needed between Israel and Syria… Keep your planes, missiles and terrorists out of Syria or watch them all go down in flames.

better not and I don think they will volunteer the Golan height, into the reestablishment of some ties, with out war.

Losing the fight,huh? Time to kiss some tush. Looks like a bit of realization is creeping into their consciousness. Yeah, Assad will have something to say to you rats, but you’re not going to like it.

Dear South Front: Define “radical militants?” Because if you mean jihadist that would be a total oxymoron since that would be Islamist taking help from infidels to fight other Muslims. If you are applying that term to anyone under arms against Damascus, as I think you are, then you are grossly oversimplifying the situation. . Recall that earlier Israel claimed a strange sort of neutrality, well this is what is meant. Whether under Assad or anyone else as long as previous cease fires are upheld they don’t care.

The only person grossly oversimplifying things is you, you mutt.

“If they’re jihadis they will never ask for help from infidels blahblah”, “the west will never work with jihadis because their ideals are different blahblah” this is your moronic thought process.

Why does an asshat not go and read an article in the longwarjournal.org by Thomas Joscelyn they are also known as FDD (Foundation for Defense of Democracies) would goive you some perspective on these groups.

So this clown thinks Syria want to have tieds with a country that kills their soldiers and supported terrorists . Seems Israel is scared stiff to have Iranian soldiers at their borders

‘I reckon we are a long way off from that but we are not ruling out anything.’ This is in response to the question of Israel having some kind of relationship with Syria in future.

I do not see this as admitting anything. It would be silly to rule out any possibility in some future date. Further, there is already some kind of relationship, for example the 1974 disengagement agreement and more recently, an understanding that Iranian forces not be positioned in any buffer zone along the Israeli controlled contact line. There is also clearly backchannel communications going on with Russia as intermediary.

To sum this up, one of the vaguest of questions posed, gets an equally vague response that adds up to a whole lotta nothing.

‘As an active phase of the Syrian conflict is coming to an end, Israel is forced to make steps to admit the reality.’

Ok. And what steps will Israel take? LIEberman’s statement is a non-admission of some unknown time far off in the future. What about the here and now. Syria is yet to clear the border contact line with the Golan Heights and it is there that the risk of open conflict is greatest. Further, the Turkish occupation in the North and YPG/US/French/UK occupation of Eastern Syria remain to be dealt with and how that will turn out is anybodies guess.

Assad has stated that all Syrian territory will be liberated regardless of who is occupying the land. No ambiguity there. Iran and Hezbollah have also made it clear they are staying to protect Syria and help Assad regain stolen lands. If there has been an agreement of partition of Syria, I have my doubts that any such agreement will be respected.

Israel may tolerate Syria retaking the borders with the Golan Heights given the concentration of forces and presence of Russian personnel. But once Syrian forces engage in the North and/or Eastern Syria, Israel may see opportunity to strike while Syria and her allies are tied down elsewhere.

Note: Israel values the Golan Heights for its resources such as water, in addition to being a buffer. An attempt to take the Golan is justified yes, but also risky as Israel may go nuclear. A diplomatic solution, if possible is much preferred.

This war in Syria is far from over, and I fear the worst is yet to come.

No…..Putin threw Syria under the Bus years ago.

Syria was to be Global MIC party where each get to test everything. …even tactical nukes. Syria is a genocide. ..just as Iraq and Libya were.

US brings F 22,A 10,C 130 Puff the Magic dragon. … Drones. … Syria’s Military just gets wasted by Empire. France dancing around in Syria is rub the loss in your race.

Putin sends the piece of shit aircraft carrier which does nothing except lose aircraft in 2015. Syria needed Airborne units….mobile helicopter team insertion, …..Attack Helicopters with night Vision/Targeting. No……Syria was overun on every border while Putin was soft on Empire.

I’m thinking Russian Generals are fucking idiots. …. Russia failed In Syria… Everyone got inside Syria and fucked the place over 24……While Putin was Boss

China will have the Future military with AI to really give USA trouble. Russia is completely Jew buggered… Jews will pull Russia down. …..like they have historically .

What has got Putin to do with this shit? This is about Herr Obersturmbannführer Liebermann und sein Führer Satanyahu…nicht Mutti Merkel….

The russians are walking hand in hand with the saa aa they remove the last enemy strongholds. Strange way to throw someone under the bus.

You just have no comprehension of what is really going on as you will see a NATO/US withdrawal in the Mid East Why do you think US has conceded Crimea and are thinking of a withdrawal from Ukraine. Image and public perception has been destroyed of Russia and the US as they are both seen as polar opposites of their media portrayals.

“Tel Aviv Does Not Exclude Re-Establishment Of Some Ties” No kidding! Its a little difficult to completely ignore Syria when you share a land border!

Merijn
Reply to  The Farney Fontenoy

If a jewish man is making noise with his mouth, it’s a lie or a threat.

What is that expression Israel, time to eat crow? Soon we will see a unified Iran Syria and Lebanon and Hezbollah I bet Israel Is pretty nervous.