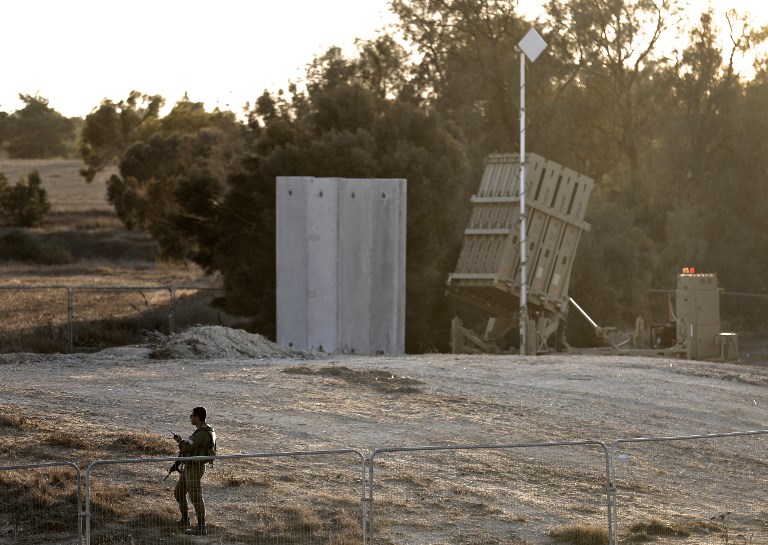 The third rocket fell in the area of Nachal Oz kibbutz. Security forces were deployed to the area.

There were no reports of casualties or damage.

In response to the rocket launches, the IDF shelled two positions of the Palestinian movement Hamas in Gaza.

In response to the rockets fired towards Israel, IDF tanks and IAF aircraft targeted two posts belonging to the terrorist organization Hamas in the northern Gaza Strip.

The rockets were probably fired by the IDF. Palestinians wouldn’t fire them.

For example: on 12 December 2017 seven rockets from the Gaza strip were fired into Israel. The Palestinian armed group al-Nasser Salah al-Deen Brigades took credit for these rocket attacks.

Yes, I am well aware of that fake news. Palestinians know that if they fire rockets, the retaliation will kill many of their family and friends. Is it so difficult to work out?

Any news that doesn’t fit your narrow world view is instantly dismissed as fake news. Yet the source is NOT western main stream media. It is Zero Hedge.

Even SouthFront reported the same rocket attack and the same responsibility: https://southfront.org/al-nasser-salah-al-deen-brigades-fire-rockets-from-gaza-on-targets-in-southern-israel/

So now SouthFront is reporting fake news in your view? How deep does the “conspiracy” go in your mind?

Work it out yourself. Exactly how much damage do those rockets do? Next to nothing. Do you think Netanyahu wants rockets fired that would do damage? If the Palestinians DID want to do some damage, they would get hold of some rockets that could do damage. Firing rockets towards Israel is like asking for a death sentence on hundreds of people that you know. Even if you were insane, your friends wouldn’t let you do it.

You might believe everything that Southfront posts. That is your choice. You will get better news than the MSM but everything?

So there is zero chance in your mind that the rockets didn’t hit anything because they were simple unguided rockets fired for their psychological effect with any casualties or damage a bonus? Zero chance? That they didn’t fire more accurate rockets because they are saving the good stuff for all out war for Israel? Or perhaps because Eyypt is cracking down on the tunnels and good rockets are scarce? Again zero chance in your mind?

But apparently more likely in your mind is this scenario: The Israelis fire rockets at themselves via some fake Palestinian group. The fake group takes credit for it on Arabic web sites. But not a single Arab voice.. not Hamas.. nor any Palestinian nor sites hostile to Israel like Southfront or AMN or any Syrian web site is able to denounce it on the web as a fake attack. Instead they stay silent knowing that Israel is playing a dastardly trick simply so they can bomb the Gaza Strip.

That is how I can work it out for myself? By ignoring rational explanations and accepting some half baked theory, presented with zero evidence, that requires me to put on my tinfoil hat?

If you are not capable of working it out, you have a choice… Either give up or try harder.

Three rockets were reportedly fired today. Two were shot down by Iron dome. The third hit a building in Shaar Hanegev causing minor damage. No casualties reported. A tank and aircraft targeted Hamas military posts in retaliation. Now who do you think came worse off? Do you think the Palestinians are too thick to work it out? You think they will keep firing rockets till Israel wipe them out completely? Do you really think they are that stupid? You must be aware that the IDF have infiltrated much of Palestine. They don’t need some fake Palestinian group. Don’t reply. I find your attitude shitty.

Did you REALLY quote Zero Hedge, Rymill, when a ZIONIST TROLL took down that site by getting a job as a moderator there and carefully worked from within to destroy the independence of ZH and return a pro-zionist aspect to its operation?

All serious anti-zionist forum members were BANNED at ZH. Now the comments are pure dribble- dominated by zionist trolls. While the zionist moderator was eventually outed and thrown out, ZH has never recovered. It’s choice of promoted stories now fully serve the same zionist agenda as mainstream media.

PS see the word “tinfoil hat” and you KNOW you have a zionist troll.

I am also quoting Southfront. Are they zio trolls too?

Putin, every few months, gives interviews professing his love, admiration and undying support of Israel. Even ‘controlled opposition, The Saker, moaned about the pro-zionist stance of RT and Sputnik- but mostly cos he sees orthodox christianity and judaism fighting each other for power in Russia.

Southfront is pro-zionist? Who knew?

The Saker refers to Southfront as “partners” on its home page. So Saker bemoans pro-zionist web sites like Sputnik and RT but partners with SouthFront…..who are also pro-zionist… yes it is REALLY hard to understand.

Google is paying 97$ per hour,with weekly payouts.You can also avail this. On tuesday I got a brand new Land Rover Range Rover from having earned $11752 this last four weeks..with-out any doubt it’s the most-comfortable job I have ever done .. It Sounds unbelievable but you wont forgive yourself if you don’t check it !gd189d: ➽➽ ➽➽;➽➽ http://GoogleCashCareerNationPartTImeJobs/computer/jobs… ★✫★★✫★✫★★✫★✫★★✫★✫★★✫★✫★★✫★✫★★✫★✫★★✫★✫★★✫★✫★★✫★✫★★✫★✫:::::!gd189lhhhhh

It has become laughable to read any reports now about “rockets” being fired from the Gaza Strip into Israel, simply because the Palestinians do not have any of these supposed “rockets” to start with… In every case, it has always been the Mossad operatives doing the deed…

Southfront will cover reports of rockets fired from Gaza, justifying the atrocities carried out by the jewish state, but won’t have reports covering the story of Ahed Tamimi, and this young girl’s sickening treatement at the hands of the jewish army.

A Putin linked outlet is an Israel supporting outlet, and this should make all of us sick to our stomachs. The jews of Israel have gone buck wild this Xmas torturing and killing ‘sub-Humans’ all across Palestine, with near zero coverage in OUR media outlets. Until Putin and Russia throw off the shackles of jewish domination and control, and denounce the vile demonic states of Israel and Saudi Arabia, we have no lasting hope.

Jewish controlled media outlets like CNN, The BBC, Guardian and NYT lionise Saudi Arabia- and a few months back jewish leaders finally came out in public and told of their brotherhood with the wahhabis. The evil, and evil planning of these pseudo-religious cults cannot be denied.

Yet even Southfront treads on eggshells when it comes to coverage of Israel and Saudi Arabia.

Other sites are covering the jewish atrocities against the poor people of Palestine- why does Southfront support the zionist agenda by focusing on reports that soft justify the disgusting acts of the zionists.

Jewish monsters from places like New York invaded a palestinian orchard and started uprooting the trees for instance. These jewish terrorists are called ‘settlers’ in far too many places- like wahhabi ISIS invaders were ‘settlers’ when they forced their way into Syrian towns.

Anyway these jewish filth were confronted by ordinary palestinians seeking to protect their land. Armed jewish ‘police’ from Israel turned up and started shooting at the innocent palestinian farmers, supporting the jewish terrorists who were destroying the trees.

Where’s Southfront’s coverage of this. Or the coverage of jew nazi stormtroopers kidnaping and torturing non-jewish kids all across palestine cos those kids dare to object to jewish crimes against Humanity.

RT and Sputnik act as if Israeli jews control those Russian outlets. Why is Southfront doing the same?

Google Mondoweiss, people, and read coverage of actual jewish atrocities this christmas that would have made the original nazis blush. Why haven’t we had a Southfront article covering Ahem Tamimi, and this young girl’s treatment at the hands of the nazi jewish state of Israel?

Sites linked to Putin are soft on the nazis of Israel- perhaps Southfront wants to rethink this policy?

Some of the things you say make good sense. I will look further.