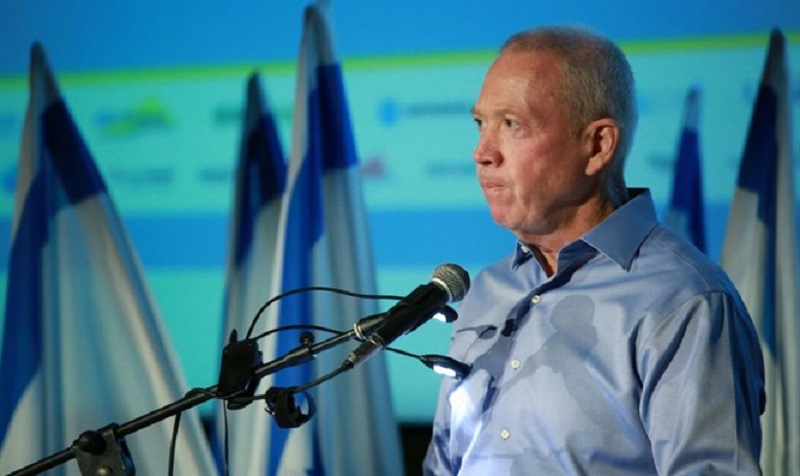 Galant made the statement speaking at a conference outside Jerusalem amid the recent US allegations that Syrian security forces were conducting mass executions and were burning the bodies of the “victims.”

“The reality of the situation in Syria is that they are executing people, using directed chemical attacks against them, and the latest extreme — burning their corpses, something we haven’t seen in 70 years,” Galant said, according to The Times Of Israel.

He called that Assad’s alleged actions are a “genocide” with “hundreds of thousands killed.”

“In my view, we are crossing a red line. And in my view, the time has come to assassinate Assad. It’s as simple as that.”

What about Israel killing Palestinian children all the time? Should Nethanyau be killed as well?

Nothing stop western propaganda, A real massive destruction weapon for western brainspeople . Apartheid is working in Israël. That mess (what this sioniost minister said) is for the next meeting in Ryad with Trump. The sunnit countries have to go in the way of us/israël/whahabittes and muslim brothers otherwise they are not “allie” and who is not an allie is an ennemy… Trhreats are all over the world, more and more, faster and faster. The satanists must be stop cause WWIII is not so far, Does Iran invade S-A?

Jewish propaganda is not in any way Western

This is not “Jewish propaganda”. Zionism is not Judaism. It is a weapon in the arsenal of criminal imperialism Those goy zionazi quisling scum are as Jewish as the Grand Dragon of the Ku Klux Klan is Christian.

who cares anymore …its the jewish problem and we are dealing with it…….the jews and their degenerate faith of satan will be eliminated……

Jews will not be eliminated! Not any believer on any religion! That will only perpetuate terror! F…k all religion is a better sentence to use here. You have criminal beasts in all creeds. I love Syria because it is a laicist country; I despise the opposition because they are religious fanatics. And I hate racism.

I hope they destroy each other, allowing YPJ to bring abortion rights to the entire middle east, like Russia and Turkey but unlike Assad.

I think you mean that there are criminal beasts in all creeds and among people who think they are special because they are secularists.

Do you want us to think that Judaism is yet another religion of piece? Did you ever read Talmud?

Absolutely evil Zionist rubbish! Bashar al Assad is probably the best Middle East leader regardless of what the corrupted western media pump out for public consumption. The Russians are right to support Assad as the alternatives do not bear thinking about. As a result of Russia’s stance in Syria and Libya its international stature grows by the day as that of the US and EU sinks ever further into terminal decline. In the end, Russia, China, Iran and SE Asia will win out and the centre of gravity of the world’s economy will shift eastwards for the next Century or more. Time for the US to kick out the Zionist international bankers and the Central Bank (the Fed) and free their country from tyranny. Israel’s sole plan is to neutralise and completely smash up and Balkanise their non client Arab states, foremost amongst whom are Kuwait, Saudi Arabia and the very mischievous Qatar. The entire devious plan has the total support of the US and EU and has been proceeding for the last 25 years facilitated by the 911 massive false flag attack.

No proof just words on every one of those single allegations. Even the caesar sednaya photos were a joke. And calls for assassination after what israels done. Disgusting.

If Israel needs to play the Holocaust card to influence public opinion, then that tells me 1) they are now beyond desperate to see Syria defeated/destroyed, 2) They’ve given up on chemical weapons false flags for some reason, 3) the Kirkuk-Haifa oil pipeline through Syria isn’t going to happen (Golan oil deposit fake – never existed), and 4) the utterly incompetent U.S. Department of State could not pick up where Hillary Clinton left off and has given up on Israel’s demand that Syria be overthrown.

Congratulations are in order for the people of Syria. If Israel invokes the Holocaust, then you have absolutely WON the war.

The modern day “Nation of Israel” does not allow any discussion by gentiles on the H word.

Not only does Galant (a nobody Israeli bureaucrat) toss out the Israeli-owned word ‘genocide’, but the U.S. press is filled with the recycled story about Syrian prisons – except now with ‘crematoriums’ for incinerating their victims. So they never actually use the word ‘holocaust’ (at least in the U.S. press) but the intended effect is obviously to evoke such an association.

Previously these allegations were made a few months ago on BBC TV News, the main UK Fake News and Propaganda channel who rolled out a completely healthy looking ex Prisoner to make all sorts of allegations taking place at the prison.

Why would somebody completely living and healthy be released from this “Prison” if he had to under go all the torture leading to death.

The fact these allegations are being repeated indicates the regurgitating of the Hydra the multi headed serpent. aka known as the “Terror Axis” controlled by Israel and led by the USA.

This is the time of gangster Badanyahu to be assassinated. He has crossed all red lines.

Gangster Badanyahu does not belong to our world community.

he is a terrorist and war criminal and enemy of humankind.

Not long now isra hell….the cancer will be removed by stealth….so be it.

dont forget the lampshades and the soap !!!!

Conspiring to commit murder is only part of the criminal and terrorist activity of IS – Israeli State.

Israel is the Hydra, a multi headed serpent which controls the “Terror Axis” the state sponsors of terrorists and terrorism.

The “Terror Axis” is controlled by Israel and led by the USA, UK, France, NATO, Turkey, Saudi, Qatar, etc, who are the unlawful facilitators of Terrorism in Syria and other countries by unlawfully financing, arming and training terrorists as well as unlawful oil and weapons trafficking and unlawful trading with terrorists.

Not all that simple but true anyway.

Tudor Miron “…Not all that simple…”

Its very simple, just think of it as ISIS, two terror organizations in one, Israeli State and Islamic State.

In the last few days there has been a new scandal involving the US, Israel and Trump following Trump’s meeting with Lavrov and the Russian Ambassador to the US, Sergey Kislyak.

During the meeting Trump revealed intelligence from a “foreign state” about an upcoming false flag planned by IS – Islamic State.

Its been worked out the “foreign state” was IS – Israeli State’s Mossad who are guiding and directing Islamic State as well the planned IS false flag.

Subsequently to fudge this revelation, the “Terror Axis” led by the US have started a propaganda campaign reviving a false allegation from months ago that 10,000’s of Syrians are being killed in a special prison in Damascus.

Politicians calling for assassination… we are living in degenerate time. Will any western politician pull this clown up on his degenerate statement? I’m not holding my breath.

id love to see this guys head on a pike, fuckin zionist piece of shit SCUM

who gives a crap about your view

I’m sure ISIS Airforce would like to see Assad dead, nothing new there.

yes let´s bomb Tel Aviv and kill as much Zionists-nazis as we can, the world will be a much better place to live. Zionists criminals !!!! Sooner or later you will have to pay for your crimes !!!

A fool making a foolish remark.

They’re recreating all the Holohoax lies and applying it to Assad this time.

Zionist Israelis are anti-Christ filth of the world with no morality and a deep hatred of Christ, Christianity and everyone who supports Christians such as President Assad in Syria. Assad’s protection of the several million Christian minorities in Syria against Israeli-inspired Islamic teorrists makes the Zionist leaders foam at the mouth.

He who calls for Murder will himself be Murdered. The Bible is my source.

What a Zionist piece of shit!

Assassinate this garbage and fulfill the work of Adolf.

Adolf was declaring the war against zionist-anglo-banksers etc. But for some reason he moved east trying to invade Russia (after Europe easily gave up and started providing resources to Hitler). Did you ever think that England was very close (other side of the La Manche) and Russia was far away. Than why didn’t he try to invade his declared enemy England? And yes, that again was financed by the same zion money.

Hitler did prepare for operation Sealion (invasion of England), but the Luftwaffa was not up to the the task. Without air superiority over the channel, the plan had no chance of hope. Adolf had his dreams of taking the east, but was short 1 million replacements by the end of the first winter in Russia. He followed the footsteps of Napoleon towards Moscow. :)

Did prepare… sounds like a serious attempt :) Would you please provide us with numbers – planes, tanks (and their quality), artillery of UK and Germany by the start of 1941. If you claim that invading UK was a more difficult task than invading Russia than please give us some numbers to support this claim?

Germany had very very few navy ships and the landing barges where being bombed along the French coast by RAF. “By the end of May the Kriegsmarine had become even more opposed to invading Britain following its Pyrrhic victory in Norway: after Operation Weserübung, the Kriegsmarine had only one heavy cruiser, two light cruisers and four destroyers available for operations.[12] Admiral Raeder was strongly opposed to Sea Lion since almost the entire Kriegsmarine surface fleet had been either sunk or badly damaged in Weserübung, and his service was hopelessly outnumbered by the ships of the Royal Navy”

Not even funny my friend. I checked myself. After running scared from France (yes, two joined army’s France and UK were opposing Hitler when he took France. Remember Dunkirk and Ariel operation? :) Wiki only shows a little of UK’s trait (France) So did you check the numbers of actual tanks, planes, soldiers and artillery? UK had nothing serious to defend their piece of land – less than France had (it took 6 weeks to bring France to surrender) but for some reason Hitler offered peace deal to UK and they produly declined. Hitler was in a state of war with UK and was not at war with Russia. If he would concentrate his efforts on UK it will take him much less time than it had him taking the rest of Europe. But he never actually intended to fight his true masters. Same force that we call NWO gang now.

Agree that UK was lacking heavy equipment after Dunkirk. But Germany was a land based force, and they can not swim across the English channel. It took a lot of time for Luftwaffa to set up airfields along the coast, and they lost the Battle of Britain to RAF. Also the British navy still had sea control.

netanyahu should be assassinated if anyone needs to go

This reminds me when the Israeli regime said they wouldn’t be surprised if Hassan Rouhani, the president of Iran, was assasinated in Tehran, and another time when the US State Dept. said Russia fighting ISIS in Syria may lead to a bombing in St. Petersberg. In all cases, security was stepped up, and the Zionist regimes failed to kill the innocent.

What can you expect from a criminal government.