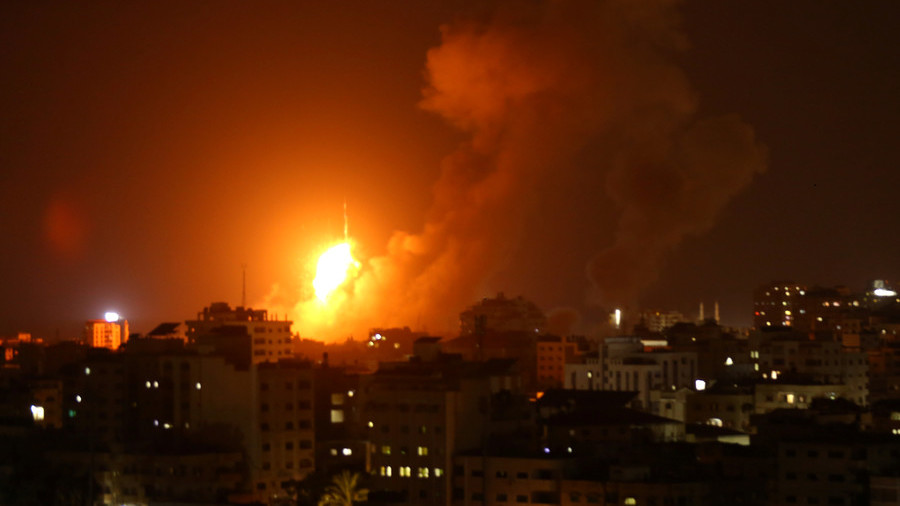 In the early hours of March 31, the Israeli military struck targets inside the Gaza Strip following the launch of several rockets from the besieged Palestinian region.

“5 rockets were launched from Gaza at Israel,” the Israeli military said on Twitter, without providing any addition information.

Palestinian sources said that the Israeli artillery strike targeted at least one observation post of the Hamas Movement east of the area of Deir al-Balah in the center of the Gaza Strip. Initial reports indicate that no one was injured or killed as a result of the strike.

This new escalation came only hours after a fresh wave of protests by civilians along the separation fence around the Gaza Strip. Palestinian medical sources said that 4 protestors were killed by the Israeli military fire, while dozens others were injured.

The Palestinian rocket attack, which targeted the Israeli Eshkol Regional Council, was clearly a response to the death of the four protestors.

Over the last few days, the Israeli military massed large forces around the Gaza Strip in anticipation for any possible Palestinian attack. A high number of artillery and tanks was deployed around the Palestinian region for the first time in years.

The Israeli government, led by Prime Minister Benjamin Netanyahu, has been negotiating with Gaza factions for days now through Egypt. While the Israeli PM is not interested in any pricy military option that could further damage his deteriorating popularity, the radical wing in the government and the Knesset may take advantage of this new attack to push for a large-scale operation.

Over 400 Palestinians, mostly unarmed women and children demonstrators have been killed in cold blood by Israeli snipers and over 4,000 injured, imagine if this was happening in Europe or any other part of the western world. This type on inhuman savagery by Israel is simply inhuman.

it does happening to europe in many countries that have been forced to receive all the shit is purring into europe, only is against the law to mention it in the mass media based on the directives of EU. Exception is italy.

Since 1991, the US and NATO have attacked and destabilized five middle eastern states and the refugee crises was inevitable. The Syrian crises is entirely the outcome of Turkish, US, Saudi and UAE policies to unseat a secular progressive government of Bashar al Assad who was unwilling to kneel to Israel and stop supporting Hezbollah. The other migrant crises for Europe stems from high birth rates and corruption in Africa and the destruction of Libya which acted as a barrier to mass African immigration. At one time or another, the United States has invaded, attacked, subverted, or regime-changed nearly every country south of its border with Mexico, as well as most of those in the Caribbean and Africa. Italy was the primary force behind the NATO attack on Libya and killing of Ghaddafi. So the consequences are more complex. EU is destined for failure as Italy and Spain may follow Brexit. Italy is already creating strong economic links with both Russia and China. Italy is also part of Chinese One Belt strategic partnership. NATO also looks pretty much out of date and irrelevant despite Russophobia as a justification.

all you telling me are known and common knowledge, but is not only african imigrants they purring into europe is also afghans and pakistanis by the tens of thousands, changing the demographics of many countries.

The point is that you need to freaking stop bombing Arab and Muslim countries if you do not want them coming to you your country. It is only when they have been rendered homeless and starving that they look for other means to survive. Do you want to tell me what percentage of USA, Canada, Australia, New Zealand were white before the white man arrived?

before posting again, try and connect your brain cells to your fingers, as well know, to whom you responding to.

r u trying to say something moron or jerking at the mouth again?

The world has allowed Israel to act with such brutality. No doubt it is contemptible cowardice to kill the most destitute people in the world, but the blame also lies on Arabs and Egypt for closing their eyes to such daily atrocity.

Why do You put family pictures here ?

It is really sad that Egypt, Arabs and rest of the so-called civilized world has allowed the Israelis kill the mostly unarmed and totally quarantined Palestinians in Gaza to be shot daily like sitting ducks. Using modern weapons, high explosive ordinance, tank shells and cluster ammunition on such a densely populated urban gulag is worse than a war crime. Israel has no respect for humanity or basic human values. Egypt is as culpable for the slow motion genocide of Gazans by closing off all access to Gaza, even medical and humanitarian aid.

If the Russians in fact never agreed to these so called joint patrols, and it’s just a ruse by the Turks to formally expand their presence from their redoubts to the entirety of the DMZ contact line as a blocking mechanism against Syrian government coalition clearing operations. Which is what it appears to me to be. Then it’s an overreach that I think needs to be viewed as a sign of aggression on their part. And a further retrenchment of their position against the Syrian government in conjunction with the cancellation of the US withdrawal.