At the afternoon of January 6, unknown individuals flew a bunch of balloons attached to a model plane from the Gaza Strip to Israel territory around it. The model plane was reportedly labeled with a logo from the Gaza engineering college.

Toy drone with countless balloons launched from the #GazaStrip was found by a resident of a southern #Israel community less than an hour ago. pic.twitter.com/OpnoHJwIcz

The model plane provoked a strong response from the Israeli military, which revealed that an improvised explosive device (IED) was hidden inside of it. The military held the Palestinian Hamas Movement responsible for the attack attempt and announced that its warplanes carried out two airstrikes on positions of the group in Gaza.

“Hamas will bear the consequences of its actions,” the Israeli military said on Twitter.

The Palestinian Shehab Agency confirmed that Israeli warplanes targeted two observation posts of Hamas in the areas of Khuza’a and Malka. The airstrikes didn’t result in any casualties.

Last October, the Gaza Strip witnessed a dangerous confrontation between Hamas and the Israeli military, during which each side carried out dozens of attacks against the other. The new incident will not likely develop into a similar confrontation as no one was hurt on both sides.

Israel has has now announced a no float zone around Gaza, along with ban on imports of all party balloons to the area. Many carrots where crushed by IDF but no IED found. LOL 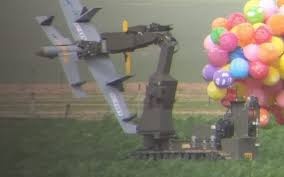 Go ahead. Do it, Israel. Cross the clown’s red line…

We all float down here.

What ever went wrong with the Palestinians. One can recall back in the 1970s and 80s that the jews and yanks were too frightened to leave there territory for fear of being killed. Ahhh the good old days!!!

It was never like that, the Jews and Americans lie about everything.

Wrong. There was an incident on a plane with the passenger door open and a US solder got executed. There also was the Idi Amin incident, Munich Olympics massacre. Your comment either shows ignorance or deliberate denial. Troll comes to mind.

And all the Palestinian groups who carried out those attacks were smashed. Palestinians based in southern Lebanon in the early 80’s tried to do the Hezbollah thing by bombarding northern Israel, but they got smashed hard and were kicked out of Lebanon by the IDF. Overall Palestinian military resistance to Israel has always proven to be feeble and ineffective. Ordinary Palestinians taking to the streets of Gaza and the Westbank armed with rocks during the 1st Intefadah proved way more effective in bringing Israel to the negotiating table then the PLO ever was.

I reckon that if the Palestinians had turned to non-violent resistance, akin to Gandhi and Martin-Luther King they might have accomplished far more then by constantly resorting to armed resistance. As this plays exactly into Israel’s hands, allowing them to paint the Palestinians as rabid terrorists.

but we’re waiting for the iron doom and the total discontinuation of israel, netanyahu and liebermann et al before the ICC – pity ICC can’t issue arrestorders on war criminals like the ones mentioned. and the mere fact that israel is allowed to run an extermination camp a la dachau/treblinka etc is so shameful for politicians around the world, in particular for the eu, which is forced to accept israel as a co-partner, fotball qualifiers the european song festival since no other section of the world would stand the stench emanating from the israelis!