The Israeli Air Force has bombed five targets at a compound allegedly belonging to the “naval force” of the Palestinian movement Hamas, the Israeli Defense Forces (IDF) said in a statement on June 3.

Israeli warplanes carried out strikes on a total of five targets.

The Gaza Strip remains under a total land and sea blockade. So, when it’s needed, the IDF describes any vessels in the area as “terror targets”.

Late on June 2, the IDF announced that Israeli forces had stricken 10 targets belonging to Hamas in the Gaza Strip. The IDF described the strikes as a response to shelling from the Gaza Strip. At least, 4 projectiles were launched at Israeli targets from the area.

So, if Israelis declare that Hamaz is taking advantage of your kitchen freezer to undermine Israel’s security, it must be taken for granted and your fridge turned into smithereens. Mad world – indeed.

Not only your fridge, but your kitchen, your house, your neighbours’ houses and anyone who happens to be in them.

All Jews must die.

You are an Israeli troll.

You are a shill.

“Mighty” IDF wins a historic naval victory that makes Trafalgar, Midway and Leyte pale into insignificance – by blowing up a storage shed in Gaza, that presumably housed a Hamas aircraft carrier and 2 nuclear submarines…

It’s a shame that Israel disseminated lies with impunity. Provocation is an Israeli tactic. 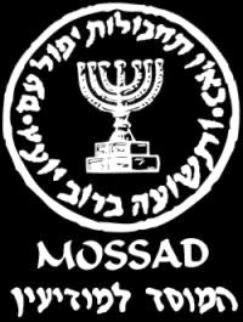 THE MOTTO of Israel’s spy agency, Mossad, is, according to recently defected Mossad agent Victor Ostrovsky :

“By way of deception thou shalt do war.” That motto describes more than the modus operandi of the world’s most ruthless and feared organization of professional assassins and espionage agents; it really describes the modus vivendi of an entire race. It is necessary to understand that fact before one can hope to understand fully the role of the Jews in national and world affairs.

The concept of a race eternally at war with the rest of the world is alien to us. It is difficult to believe or even to grasp. When we examine such a concept and begin sifting the evidence it is easy to become confused. On the one hand we have the Old Testament injunctions to the Hebrews from their tribal god, speaking through their prophets, to annihilate every Gentile nation over which they gain power:
**And thou shalt consume all the peoples which the Lord thy God shall deliver unto thee; thine eye shall not pity them . . . thou shalt save alive nothing that breatheth. **

US and Israel have converted whole Middle East into multiple death zones, where they slaughtering human children to establish foothold and military bases.

I surprise that the Arab all countries have one religion, one language and one culture, so they should be one country and should be supper power to easily protect themselves as well as their neighbours from US and Israeli atrocities but still Britain have divided them to control them easily. The most idiot, illiterate nations on this planet Earth are Arabs.

Not surprising really – Slavs have a dozen countries between themselves; the Scandinavians 5, Germans 4, Anglo-Saxons 5 etc. Also people we call Arabs today are really ethnically, genetically and culturally diverse – just compare Bashar Assad (pale as a Swede) to MbS to Anwar Sadat or Mubarak (Nubian Egyptians) to Rami Malek (actor, Egyptian Copt) to Ghadaffy (or any other N African leader – Berbers)…

Religion, language and culture alone are not enough to unify otherwise highly disparate groups into a single nation state. And in fact, their cultures are actually quite different amongst one another.

Israhell created Hama’s ,precisely to enable it to attack Palestinians at will,knowing it has the full backing of its jewSA and European puppets.The synagogue of Satan.

Next, the pathological jews will tell us Hamas is building a secret nuclear bomb in Gaza.

The term naval force means that Hamas has ewuippes itself with small boats, why is SF putting it in quotes?
..
South Front really need to read about the definition of terrorist, I bet the same guy wrote this article as wrote other anti-Semitic troll works.