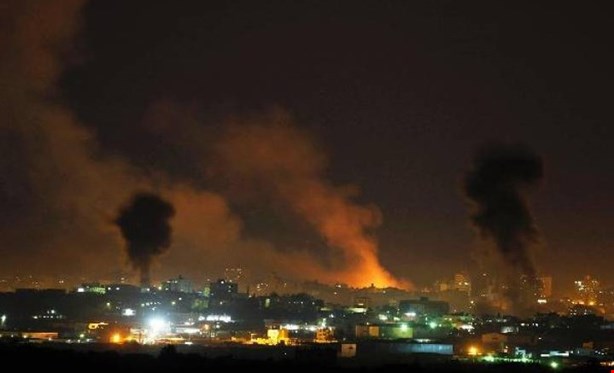 On December 14, the Israeli Air Force conducted three airstrikes on positions of the Palestinian Hamas Movement in the Gaza Strip. According to the Israeli Army the airstrikes were a response to three rocket that had been fired from Gaza on Israeli settlements north of it.

Palestinian sources said that the Israeli airstrikes targeted the Qurish command post and the Naval Police headquarters in northwestern Gaza Strip. Moreover, Israeli attack helicopters targeted the Navy command post west of the city of Deir al-Balah in the center of Gaza and the intelligence towers northwest of Gaza with several missiles, according to the Palestine News Agency (Wafa).

On December 13, Palestinian militants fired three rockets from Gaza on Israeli settlements north of it. The Israeli Army said that the Iron Dome anti-rocket system intercepted two rockets, while the third landed in in an open area in the Eshkol settlement.

As usual, the Israeli Army held Hamas Movement the responsibility for the attack, and even said that Hamas is responsible for the “the poverty, destruction, and despair amongst the citizens of the Gaza Strip”.

The State of Israel will not allow anyone to harm or attempt to harm its civilians, and will continue to guard its sovereignty. The IDF holds the Hamas terror organization responsible for the poverty, destruction, and despair amongst the citizens of the Gaza Strip

According to Palestinian activists, these were the heaviest Israeli airstrikes on the Gaza Strip since the 2014 Gaza war. The tension in Gaza between Israel and the Hamas movement have been on the raise since US President Donald Trump recognized Jerusalem as the capital of Israel.

The reason why Israhell continues to commit genocide in Palestine starting back in 1947 is below;

INFLUENTIAL JEWS who drive the Iran Haters Groups in the U$A.

AIPAC-LOBBY ON BEHALF OF ISRAHELL. AIPAC is the final recipe starting back in Switzerland as ; The JEWISH Agency in 1929 which became the American Zionist Emergency Appeal between 1939-1943. Helped by the United Jewish Appeal which morphed into AZEC and then AZC9 American Zionist Council). We know what happened in 1963 when 2 Kennedy brothers tried to enforce the FARA Laws by getting these aforementioned organisations to register as “Foreign Agents”. The court matter was handled by SIMON RIFKIND lawyer and, who knew JFK quite well. After the 2 brothers were assassinated, the matter was not pursued by any President.

Hehe. If Israel had been trying to commit genocide against the Palestinian, do you think there would be any left? In 1947, there were about 1.1M Arabs in Palestine. Today there are about 4.4 Million in Palestine, and 11M world wide. Some Genocide.

If Israel ( or better said Irgun and other Zionist terror organizations ) did commit genocide there would be no Israel today.

It’s failed try for an argument.

BTW genocide is not defined by enormously large victim number but by the magnitude of organized ethnic cleansing and strikes against some particular ethnic group.

Indeed: it is about intent and deliberate action! David Ben Gurion had a private and public views. We will talk share in public but, will do our massacres in th middle of the night like the terrorist group Palmach on the 18/12/47 where 3 Palestinians villages were listed but_ one was blown up whilst people slept.

The Irgun was a fringe group and did not reflect the position of the pre state Jewish population. So much so that in 1948, the IDF fired on the Irgun ship, the Altalena, shipping weapons from France. Sixteen Irgun terrorists were killed and mass arrests followed.

They were incorporated in newly formed state of Israel, so did their infamous commander.

By saying how Israel has allegedly confronted them you are trivializing Irgun’s role and the fact that Israel has included former Irgun memebers within government and army so it’s easily, logically, concluded that colonial Zionist regime at the time was reliant on militant terrorist groups as Irgun.

By definition: Genocide means ” The deliberate killing of people or a nation: In the 2 instances : The newly arrived Jews from Europe planed to have the whole of Palestine. So,they created what they call the Dalet/or deliberate killing: It is not about numbers! The dictionary does talk numbers: I guess murder is about INTENT. Masd murder of a group intent eg in Israhell: Read true Palestinian History. The majority came to Palestine to take all! They have nearly gotten the whole country!

So I guess Palestinians commit genocide as their constitution calls for destruction of Israel.

Google is paying 97$ per hour,with weekly payouts.You can also avail this. On tuesday I got a brand new Land Rover Range Rover from having earned $11752 this last four weeks..with-out any doubt it’s the most-comfortable job I have ever done .. It Sounds unbelievable but you wont forgive yourself if you don’t check it fm282d: ➽➽ ➽➽;➽➽ http://GoogleNetJobsCapitalWorkFromHome/more/cash… ★✫★★✫★✫★★✫★✫★★✫★✫★★✫★✫★★✫★✫★★✫★✫★★✫★✫★★✫★✫★★✫★✫★★✫★✫:::::fm282lhh

100% employee of The Jews= Mr chumpinstein!

Didn’t HAMAS in Gaza fold-up and pass the Gaza tent to the PLO? So who is Israel targeting here?

The ‘sub-Humans’ of Gaza. Despite many people pointing out the fundamental belief by ‘jews’ that non-jews are ‘cattle’ to be exploited in any way that serves the jews, fools still think judaism an acceptable Human belief system.

The jews started the slave trade in ‘black’ Humans from Africa BEFORE islam even existed. When islam, a jewish cult, arose, the jewish powerbase immediately assisted the muslims to massively expand the slave trade. Much later, the jews finally persuaded the christians of the West to engage in large scale slave trading as well.

It may interest readers to note that for almost the entirety of this HOLOCAUST against ‘black’ Humans, the justification was the obscenities in the torah (old testament) that taught that ‘black’ Humans were made to be the slaves of jews. In the early 19th century in American courts, ‘black’ Humans who petitioned for their freedom under the rules of the US constitution had their appeals turned down, when JEWISH lawyers pointed out the requisite teachings in the bible.

In is notable that in muslim lands where the jewish influence was strong (like Saudi Arabia), slavery continued as late as 1962 (yes- FOR REAL- google it). And today we’ve all heard the proud boasts of leading Israel’s and their supporters across the globe that Israel is the stongest partner of the wahhabis- the self-same wahhabis that declare all women to be ‘sub-Human’.

Those “biblcal” teachings are gross misreadings.

Islam is not Judaistic cult, how can you say something like that. That’s Gross dude…

Palestinian president Mahmoud Abbas could look towards Russia, Iran, Syria, Iraq and Hezbollah to jointly attack on Pro Trump militants Israel. In Syria and Iraq the US backed terrorists help Israel a lot.

Jewish terrorists calling all non-jews ‘terrorists’ to justify their terrorism.

The jewish way is to pay lip service to european politicians who want to find peace, allow them to offer material support to the palestinians, and then destroy all significant palestinian infrastructure under a zionist pretext for war.

A few years later when the palestinian civilian infrastructure has built up again, the jews declare war and destroy it. Over and over again. Israel is the JEWISH state. Israel’s acts are the acts of the organised jewish people.

We have no problem seeing that masons, nazis and mafia are evil- organisations that seek to corrupt decent society for the benefit of their members. Organised judaism is just another example of this- how do you think Weinstein avoids arrest, and was awarded the highest industry honours in the UK and France?

Thanx 4 this info. I’d appreciate links to the story of Israel murdering Palestinians who organized. Of course there was the infamous Nakba.

Very well said. Especially this part about mafia that seeks to corrupt decwnt society for their benefit. This is exactly what is happening today in the World. I just lack the words to desxribe that, but you hit Bulls eyes. Hat down with the arm on the heart.

Is Israeli perception of Gaza leadership as being. Partialy at least, the cause of their people’s poverty. Do you not know that the largest suapplied of concrete Israel used to build walls was A Hamas in Partnership with a Lebonon Hiz? One of largest suppliers of Euro autos into Israel is partially owned by Hamas leaders? Who among the Pals and Has and makes up the permits in collusion with Israelis for work and travel? Egypt had prices into stratosphere for food gasoline and medicines they sold to tunnel diggers. Diggers who gouged the hell out of their needy, but most were financed firstly through leaders of Gaza? There are multi millionaires among Pals who got tat way by skimming off international donations and rewards from Israel for keeping their subjects as no more than sheep herds.

Vince Dhimos
Reply to  Hide Behind

Hamas apparently has major issues. Palestinians are caught between them and the Israelis.

One day soon, this Zionist killing will backfire terribly on Israel; God willing.

Israel have their players in Gaza. Those are those Islamists movement, that, has been created back in 2006, to fight Hamas. All of those are foreigners and orchestrated with all Wahabie movements. So Idf are using them as a Troyan horse.

I believe so unfortunately. FOR ME, it is more obvious to see in The Lebanon; but same thing. Locals as well that sell their soul.

Your last sentence, I’ve always questioned and didn’t want to believe that those exist. But, unfortunately and obviously, I’m not the only one that think so.

That propaganda which the JEWS have been spreading since 1967 after ignoring. Resolution 181, ” Palestinians has hate us written into constitution” have you seen such a document?? It is Palestinians who who who country STOLEN from them. That is the facts: They also have no ARMY.