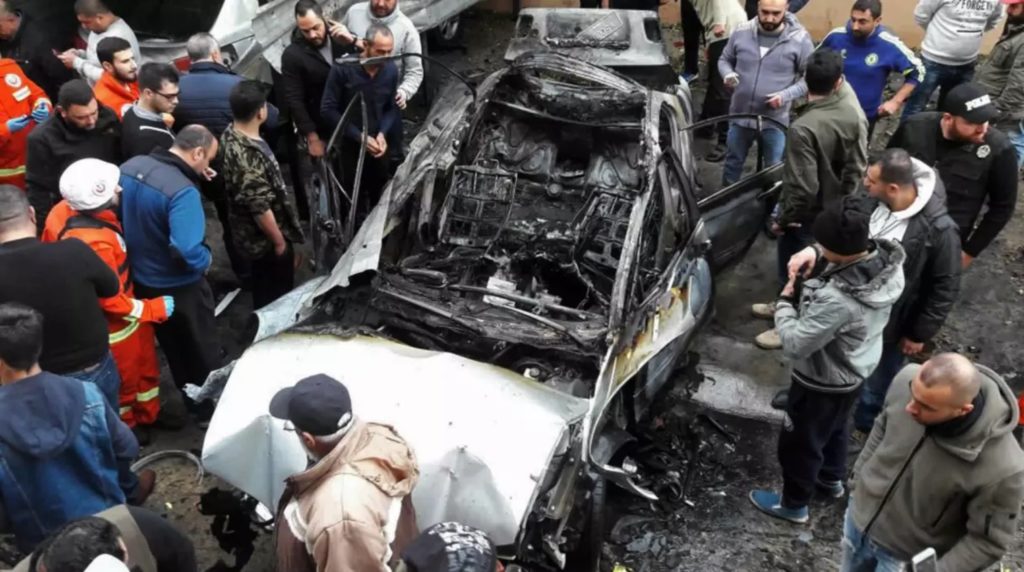 Residents look at a car that was destroyed in a bombing, in the southern port city of Sidon, Lebanon, Sunday, Jan 14, 2018. IMAGE: Mohammed Zaatari/AP

On January 19, an unnamed source of the Intelligence Gathering Division in the Lebanese State Security told the Lebanese Mayadin TV that Israel was behind a car bomb attack that targeted Mohammed Hamdan, an official of the Palestinian Hamas Movement, in the southern Lebanese city of Sidon on January 14.

The source said that the Lebanese State Security was able to track the cell that conducted the assassination attempt thanks to several surveillance cameras planted around the house of Mohammed Hamdan. Later, security forces seized two cars that were used by the cell, according to the source. However, the source didn’t clarify if any member of the cell was arrested.

The Lebanese State Security’s investigation confirmed that the Israeli intelligence agency “Mossad” was behind the assassination attempt, according to the source.

This was not the first time the Lebanese State Security detected activities of the Israeli Mossad in the city of Sidon. On November 11, 2017 Lebanese security forces arrested a Lebanese operative of the Mossad who was planning to assassinate Lebanese public and political figures in Sidon.

The Lebanese authorities believe that the Israeli Mossad has been behind several assassinations of Lebanese and Palestinian figures since the outbreak of the Lebanese civil war on 1975.

They don’t really have to make it as if there’s someone else a suspect in this case. There’s IS cell in Gaza but really they really just another mossad.

Nothing is surprising here, who else can be if not Mossad Israhelli dogs.

Goℴgle paying every one 97 US dollars per/hr to complete esay jobs on my home computer .. Labor Some only few hours daily and enjoy greater time together with your own friends … You can also have this work…last Saturday I bought a brand new Mitsubishi Evo after I been earning $12352 this-past/month .it’s actually my favourite-job however you could now not forgive yourself if you don’t visit it.!oe39z:➼➼➼ http://GoogleLegitimateCyberFinanceReportsOnline/online/easytasks… ♥♥♥z♥♥♥r♥♥♥l♥♥q♥♥♥b♥r♥♥♥a♥p♥c♥♥♥h♥♥♥h♥♥♥a♥♥q♥c♥o♥♥p♥♥t♥♥k♥♥q♥♥♥h♥u♥♥n♥♥♥f♥♥b♥r:::::!gw483d:lhuh

Another provocation by the zionist occupation. I assume that the Syrians and their allies treat these outrages as attempts to get retaliation, which they and their puppet master, American Ceasar, want for domestic war propaganda.

What is stopping Hamas doing the same to Mossad and Israeli officials? Nothing but the will to do it.

+ the fact that they cannot cross the border.

The Hamas, PLO are very good smugglers and they would have ways and means.

John, you think they haven’t been trying?!!!

Hamas terrorists are logical targets for any country fighting terrorism. Given the many attacks on Israeli civillians by Hamas, Israel is fully right to kill any terrorist leadership they can get.

Why target suppressed Gazan civillians when you can get to one of the heads of the snake?

So, if indeed done by Israel, well done.

So you have told me where you live, but please clarify he following:

Well, suspecting you can read, you can tell by my name here I am dutch, my family has been for as long as we can track (17th century) and I support secularism, gender equality, democracy and dislike islamists, islamo fascists and dictators.

Given all of this in the Syrian configuration only SDF remains as a possible side to support.

So I apologised, gave you a compliment and you come back and slag me off’ so FO.

Hide Behind
Reply to  dutchnational

How can any sane person, who is not An Israeli or US Christian Zionist which are fanatical combination of those who think only they deserve to live and rule; fail to understand that “Israel’s Rights ” are built upon lies and deceptions, and their almost totaly illegal occupation practices being no more than an ancient barbaric tribal action of physical, religious bigotry, and pure F’n greed Genocide. Then again their actions are no more barbaric than those oF Eurocentric origins, they who hide behind bullshit and dress and play in civilized narcistic hubris.

dutchnational
Reply to  Hide Behind

You just reprint what they said?!!! Hehe

They were also behind the assassination of a sitting American president JFK.