The Israeli military has dropped leaflets with threats to senior Syrian Arab Army (SAA) officers in the Syrian-held part of the Golan Heights, Asharq Al-Awsat reported on October 21.

The leaflet warned the SAA officers from cooperating with Iranian forces or Lebanese Hezbollah for “money” or to build a “resistance.”

“The interests of Hezbollah and Iran is not the same as the [SAA’s] 1st Corps, the Syrian state or the residents of al-Golan and Hauran [the southern region],” the leaflet reads, “everyone who works or cooperates with Hezbollah is a target.” 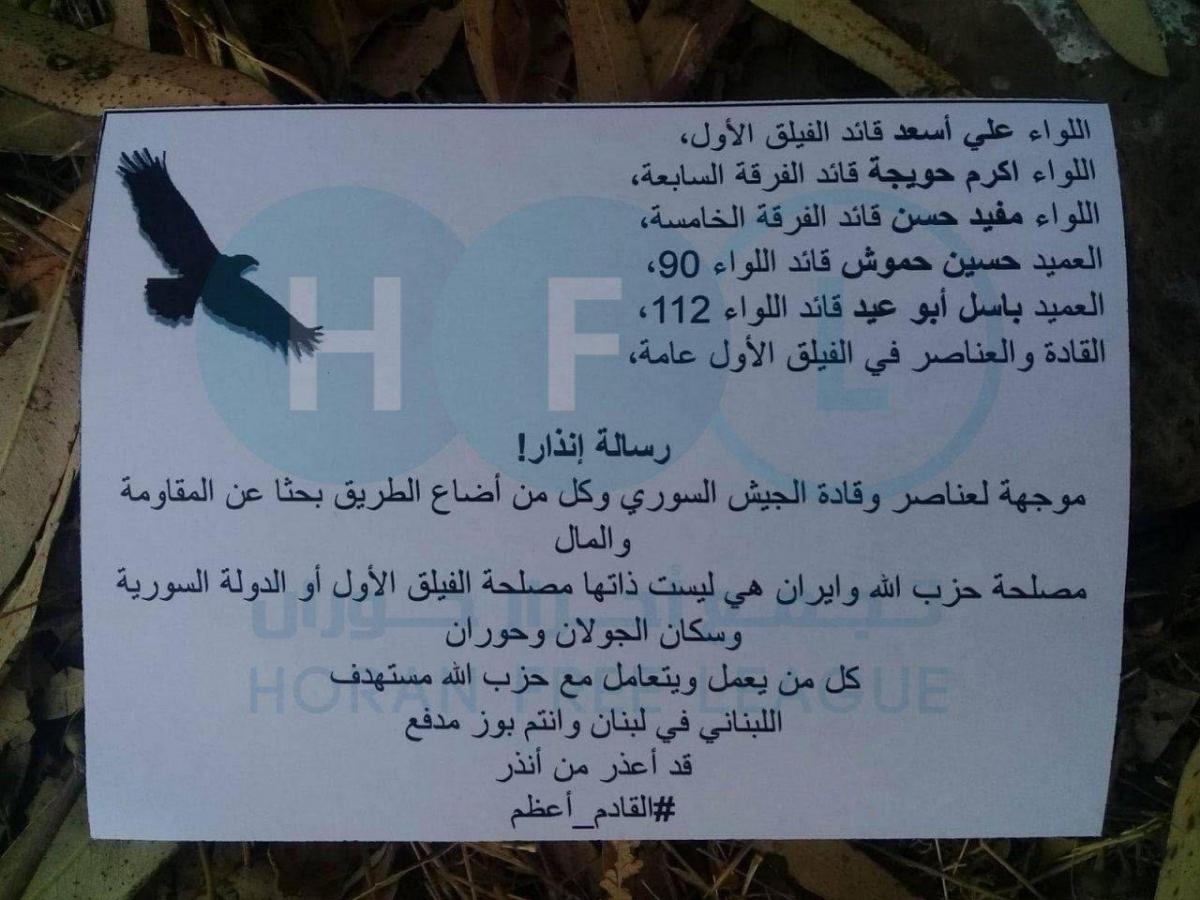 Click to see full-size image, by the Horan Free League, via aawsat.com 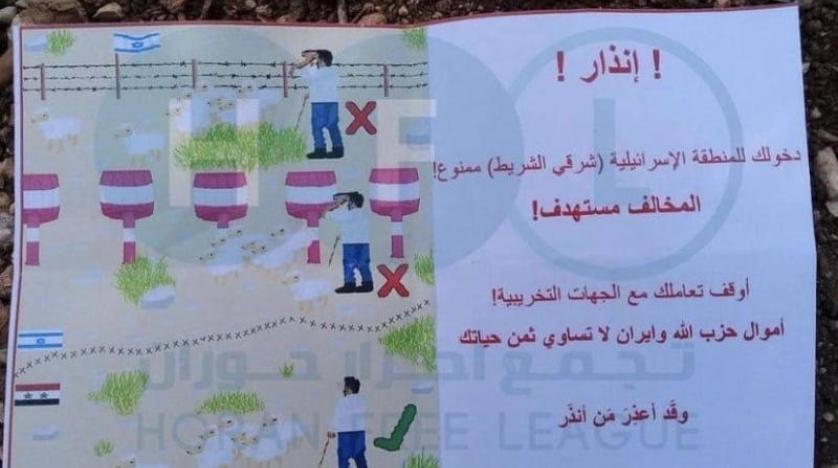 Click to see full-size image, by the Horan Free League, via aawsat.com

The leaflets named the following officers:

In the early morning, the Israeli military struck a school in the town of al-Hurriyah with a missile. No human losses were reported as a result of the strike.

“We won’t allow terrorist operatives from Hezbollah or Iran to set up on the Golan Heights border and we will do what is necessary to drive them out of there,” Israeli Defense Minister Benny Gantz said in an interview a few hours after the attack.

The Israeli threat to Syrian officers is not the first. In April, the Israeli military issued a direct threat to Major General Ali Asaad and Hezbollah commander in southern Syria Haj Hashem.

Israel is apparently about to escalate its covert war against Iranian forces in southern Syria. Israeli strikes on the region will likely increase in the upcoming few weeks and months.

Consider the source of the threats. Jews running the terror war against Syria, violating the dmz resolution every day, and illegally occupying the Golan. Telling the Syrians what their interests are. It’s like the criminal telling the victim not to defend themselves as the criminal victimizes them. These idiots are true psychopaths.

Yes they are, and the world lets them get away with it ?

The Anglo-American Zionist thugs in particular that back this Zionist cancer.

That needs to change to get the problem corrected.

A regional coalition that outmans and outguns the IDF that is sufficiently robust to deter US involvement, to clear the IDF out of the occupied territories and police the implementation of resolutions that Israel is in chronic scofflaw violation of.

It’s a matter of time.Israel will have to face a 3 front war-syria,Lebanon and Gaza.

What a joke. Those 3 has no armies.

Maybee Israel in fainess should send ballons back:)

Abay madar chod tu bakwas band ker. This is the idiot Paul and a disgrace to all real ndians.

Happened before. Syria. Jordan and Egyptian and Palestinian try and lost badly… Remember?

that is how they fight those brave idf scumbags https://youtu.be/uKSm56guYzs

It was a demand by Russia Hesbollah and Iran should remain in distance to Israel. If those military ones even so dont keep that, they are working for Iran and Hexbollah.

Thats how I see the quagmire.

It seemes You have regained as a worm.congratulations.

I just refered to, what the agreements in the area is.

Islam is leftovers from Jews and Christians.

Its a very old agreement between Russians and Israel because none of them like Iran and Hebollah.

If its ideology its Russian too.

It has been changed a lttle here and there during time, but its there.

Any helpers to Iran and Hesbollah are free targets. Here Israel is very nice asking them politlyt leave.

Ypu dont know much Do You. No wonder many parts of ME is more dark then Allah can change.

ISISrahell, land of half men without honor.

Terrorism as we know it today was born in the Rothschild neocolony in Palestine, even Albert Einstein as a Jew acknowledged this fact.

When retribution comes it will make for the israelis WW2 seem like a child’s play; they only have themselves to blame by doing what they are accusing the Germans of doing. Anti-Semitic? Opposite is true.

ERASE KAZARS AS SOON AS POSIBLE ..

Hazars were turkic tribe, not jewish.

They were converted to Judaism.

Israel is a scared and desperate thug.

israhell can only do this type of beta shit, they know any large scale attack against syria would be squashed and repelled by soviet union ahhahahaha

Time to finish off the Shia terrorists.They are also creating problems in India.A Shia bastard named Jinnah created Pakistan so I can never forgive these Shia.

Maybe but your worst enemies are the Sunni Pakistanis now. I’d ally with the Shia to defeat the Sunnis first.

Israel can only sustain this until the US empire collapses–now a nation of plywood villages, drug addicts, homeless, extreme poverty, debt LGBT/black lives don’t matter thuggery…obesity and boredom, stupidity…when USa can no longer fund Israel which nation will?

Germany.) But not by own will. May be they will stop arming zionists. Compensations comes not to victims, but for buying arms in Germany, such as “Dolphin” submarines equipped with cruise missiles which can hold nuclear warheads. Germany is arming possible nuclear terrorists, because zionist regime is not the member of any non-proliferation treaties with periodic checking of nuclear complex. Iran is the member of IAEA, why zionists shouldn’t be? Someones could say that N.Korea is also not the member, but they are not hiding they nuclear weapon. Though it will be good, if to check their abilities in this sphere.

I’ll say it again – no one in his right mind needs the jews in palestine, parasites that lie, steal and murder wantonly. engages in genocide and operates concentration camp Gaza, hitler could not have done it better. the world needs to sanction the palestinian jews to kingdom come. now, asap, urgently and immediately.

The 1st army corps is Assad home defense force, they are the most trusted commanders and soldiers in Assad’s army. The Israelis are being very specific, they’re only warning 4 of the top 5 commanders from the 1st army corps and the commander of the 112th Brigade, so I wonder why he was added to the list and yet the other commander of the 61st Infantry Brigade wasn’t included, by rights you’d think they would’ve included him and left out the 12th Brigade commander, very peculiar. It’s like the kids game spot the difference, you have 4, or in this case 5 photos on a screen and the child has to pick the one that seems out of place with all the others, at least that’s what I see in this list, obviously the Israelis are looking at the photos with a completely different perspective, so I wouldn’t like to be the commander of the 61st Infantry Brigade, all the other commanders will be looking at him very suspiciously now. Here’s a breakdown of the 1st army corps and its constituent units. …..

The 5th Mechanized is composed of the 12th Armoured Brigade, the 15th, 112th, and 132nd Mechanized Brigades, and the 175th Artillery Regiment.

The 7th Mechanized is composed of the 78th armored, the 68th, 121st, and 88th mechanized brigades, and the 70th Artillery regiment.

The 9th armoured division is composed of the 52nd mechanized, the 33rd, 43rd, and 34th armoured brigades, and the 78th artillery regiment.