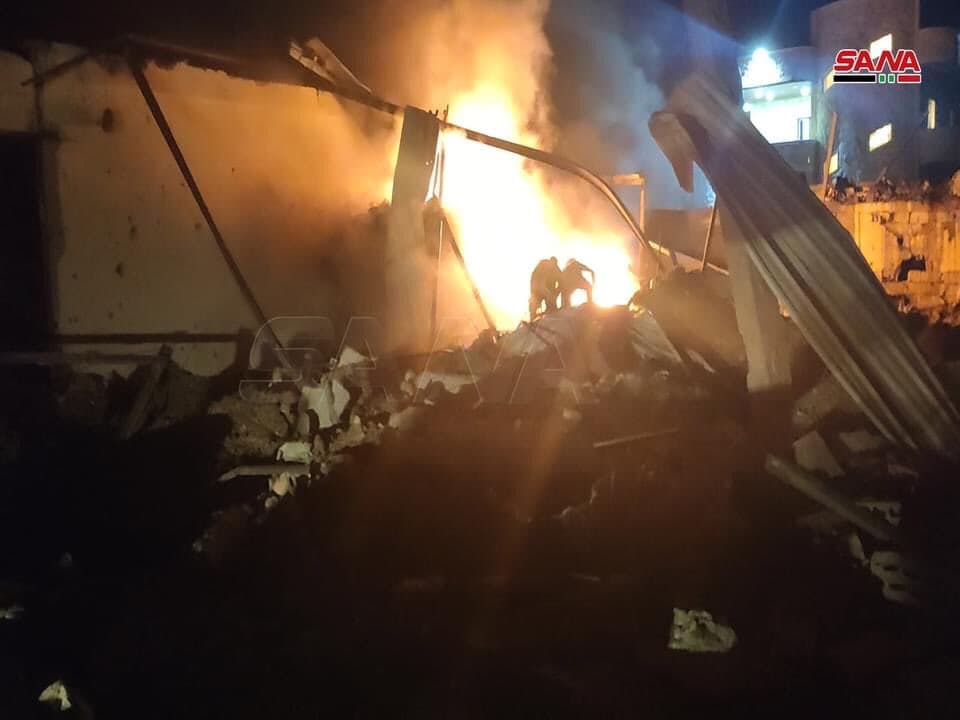 In the early hours of May 5th, Israeli warplanes struck a number of locations in Syria’s southwest.

According to Syria’s Ministry of Defense statement, the incident took place around 2 AM local time.

“At around 2:18 am today, the Israeli enemy carried out an air aggression from the direction of southwest Lattakia targeting some points in the coastal area. Our air defense media intercepted the aggression’s missiles and dropped some of them.”

And the Israeli aggression led to the death of a civilian and the wounding of six others, including a child and his mother, in an initial outcome, in addition to some material losses, including a civilian facility for the manufacture of plastic materials.”

Some, but not all missiles were intercepted.

“Our aerial defenses intercepted the aggressor’s missiles and downed some of them,” a statement from the Syrian military said.

As reported, one civilian died, 10 others were injured and 4 of them are in critical condition, with all of the injured taken to hospital.

The Israeli strike targeted military points near Deir Shamil, in the western countryside of Hama, and it caused several injuries that are being treated.

Overall, multiple sites were targeted. A civilian asset was struck in the Al-Samra area, causing the death of a civilian, and a Syrian military site in Deir Shamil, near Masyaf was struck, injuring personnel.

Apparently one of the sites struck tonight is a military site near Deir Shamil in the Masyaf zone west of Hama. A possible Syrian military base is located on the outskirts.

Videos posted to social media showed a large fire and several loud explosions at the scene of the blast.

SANA said the site was a plastics factory. Israel has reportedly bombed sites connected to Iran’s alleged missile production and arms depots in the areas of Latakia and Hama before.

Israel has not yet officially commented on the incident. Israel has frequently struck Iranian military targets in Syria in its proxy war with Tehran.

Additionally, Russia operates a base nearby, and this is likely the closest an Israeli strike has landed near Russian forces in recent months or even years.

It is nearly two years now that Russia sold Syria a system to stop Israeli attacks but they go on and on and on seemly when ever they want with impunity. Yes I know they fly over London and shoot from there so they will be safe but.. I do remember it being said that if Israel attacks again the airbases they came from would be attacked in return.. Hmmm , how long ago was that and how many attacks have taken place without a finger being lifted in return.

probably the value of damage does not worth a retaliation that would provoke new heavier strikes from isis..aa..israel

Iranians and Syrian helpers are no attack on Syria but Iranians and the facilities they use.

The given helping missiles to Syria is for defending the Syrian State if its attacked.

Mr and Mrs wallace after years probatly still dont see the difference for putting in a banana and a coconut into his behind. Its 2 different things Wallace.

Furthermore its an old agrement with Russia too. I thought it even in Your deep dark state of selfmade darknes was known Russians are enemies to Iran but cant allow themself to attack Iranians, because they are helpers for their socalled Assads too and are doing well against the Jihadists.

Hard to get reliable information.

IAF have launched no less than 16 GBU 39 aerial bombs and only have destroyed an small plastic factory in Ram Shamra…Debris have caused damage in civilians houses in Jableh…all missile launched vs Military sites have been intercepted…no photos of Syrian military bases burning have been posted and SANA sources dont talk about military assets damage!

why doesnt SyAAF scramble jets when this happens?

Not sure IAF would spend millions of dollars and risk pilots and planes for “a small plastics factory.” Syria is unlikely to bill their weapons centers as “weapons centers.” You should read more spy novels. You would learn quite a bit.