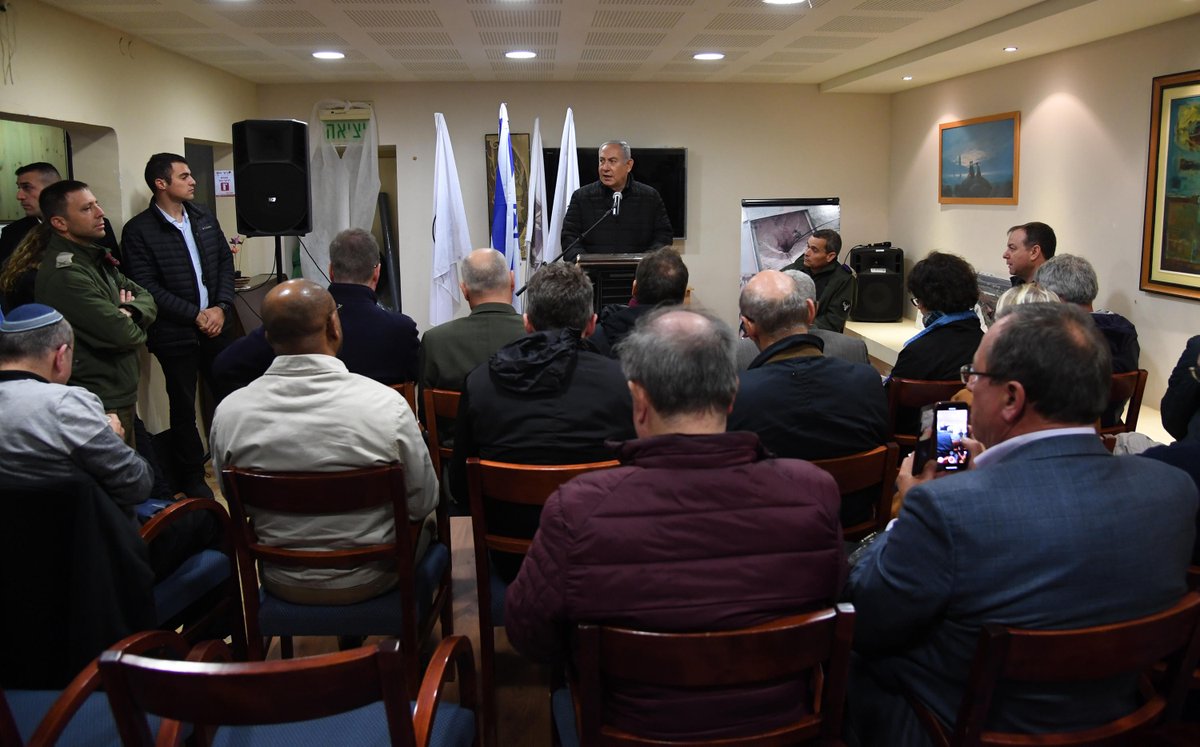 Israel’s Prime Minister Benjamin Netanyahu said that there is a “reasonable possibility” that the Israeli military may have to conduct operations inside Lebanon territory. This move will go as a part of the Israeli military’s ongoing Operation Northern Shield, which is aimed at discovering and neutralizing Hezbollah cross-border tunnels.

“This operation is just beginning but in the end, the tunnels weapon, in which Hezbollah has invested so much, will not exist and will not be effective … Whoever attacks us – is taking his life into his hands. Hezbollah knows this and so does Hamas,” Netanyahu told 25 foreign ambassadors during a tour in a supposed tunnel site in the upper Galilee on December 6, according to the Israel Ynet News outlet.

Netanyahu also revealed that Israel will call for a U.N. Security Council meeting soon to demand a response from the international community to the supposed tunnels of Hezbollah. The Israeli PM even demanded a condemnation from the Lebanese government, which does not even recognize the existence of Israel.

“Israel expects an unequivocal condemnation of Hezbollah, the imposition of additional sanctions on Iran, a condemnation from the Lebanese government and a demand that it stops giving its approval for the use of its territory for these attacks against Israel,” Netanyahu said.

A day earlier, Hassan Hoballah, a member of Hezbollah’s political bureau, warned Israel from launching any military operation inside Lebanon and stressed that the “resistance” will response to any such aggression. Hoballah also revealed that Hezbollah fighters are on “a constant state of alert and surveillance, and are assessing the situation” in southern Lebanon.

Netanyahu’s threat proves that Israel may indeed seek a military confrontation with Hezbollah. Local observers believe that such confrontation, if it happens, it will be very limited because a full-on war would only create more problems for everyone in the region, including Israel.

let him try and israel will be toast and the population swimming to safety, the beginning of a 5000 year diaspora – bring it on!!!

War monger. How many must die before you have your fill?

Well only the American and Israeli people could answer that question, they are the number one child killers of the world.

Not the american or israeli people. The sick fucks running those governments are to be responsible.

You can see what happens to politicians who stray too far from the will of the people right now in France, the same applies in other countries. The American people accept, and even cheer when the USA slaughters people in other countries, they chant USA USA USA, they are proud of the death toll.

You will all rot in hell for your crimes.

The war would have been over years ago had not the US, Saudi, Nato, Israel, etc kept the war going, how many deaths are on their hands?

I’ve said it before and the best and quickest solution to the israel question and that is that Russia load up a great number of ICBMs in the Caspian and aim them carefully towards tel aviv and let them fly and the world would have pleasure to see the iron dome at work and a great number of occupying israelis swimming at maximum speed towards, well, I guess, Cyprus.

moreover, saw in the draw for the next european championship that israel is part of the european group, and that must be stopped and the country moved to the middle east group, now that they are so chummy with MbS.

Bullying Syria didn’t work, so they’ll have to find a smaller kid to beat up in the school yard.

They want to steal land.

They’ll end up chewing their own rubber bands, they had chopped off.

They always do, for thousands of years they have been stealing, and when they get caught they wail you are picking on me because I am a c*nt.

Oh that is making me laugh. Absolute hilarious as that is my sort of conversation. Brilliant.

Still laughing you git; what a breath of fresh air.

At least we agree that it is not working for Israel with Iran now in control of both Lebanon and Syria.

Will you shut up with your NATO crap propaganda?! You are lost, so maybe you should know this is not yours CNN forum…

Perhaps you would have preferred Isis or some other radical group in charge of Syria. The countries keeping this war going & supporting the various rebels groups have a lot of blame in those deaths its not all on Assad

Notice how none of these hasbara shills speak about their last regime-change project[Libya]? That’s the blueprint they set forth for Syria and they’re upset that Putin/Hezbollah/Iran and of course, the SAA derailed their plans.

You mean Obama-Hillary Clinton Libya project? Those dead belong on their door step.

Obama started the war in Syria, also started and initially funded ISIS. Have never been an Obama supporter… how about you?

So you think Israel is the big winner in this Syrian war? What exactly has Israel won? Easy to see what Russia, Iran, Turkey and Kurdistan have won. Not seeing anything for Israel.

You can call me Al
Reply to  michael Harrison

Actually it was written somewhere I read, that getting rid of Syria and the Lebanon (mainly Hezbollah), is the only thing that Israel wants and needs.

By the way, Hezbollah in no way, are the weak school kids anymore.

A smaller kid that will not hesitate to rain missiles all over israel. Beside they are nto an army of queers and lesbians whose expertise is to kill children and civilians as long they not armed and fighting back.

Zionist scum are cowards and know the cost of a long war with Hezbollah that will destroy Zionist hovels. Beating up unarmed Palestinians is one thing, taking on the toughest Hezbollah fighters in the world is another :)

Hezbollah is doomed to follow Iran into oblivion. As Iran becomes the next Syria and gets cut up into pieces parts it’s foreign agents like Hezbollah will be eliminated.

Who are you trying to convince, yourself?

just bs talk of the dirty stinking satanic jew bibi.(elections r on the way and his indictment)…….no way the entity israel is going into lebanon..and if they did lololol………. let them jews in tel aviv and aschdod and haifa feel the pain and suffering of the poor folks in gaza….. like the great nasrallah said “bring it on”

hey trojan… is that your wet dream?

If they find something, I’ll feel certain they’ll make sure to seal off BOTH ends of the alleged tunnels.

Well what are they waiting for? I am sure Hez will be waiting for them with open arms. They do have an unfinished business to finish since they left it half done in 2006 and are eager to do so.

Bibi the Jihad pig ready for the another invasion and slaughter of civilians.

“On a foggy day like this one, you can assess the murderous effectiveness of the terror tunnels I’m talking about,” Netanyahu told the diplomats, “What we are faced with is one large enemy. That enemy is called Iran.”

So Bibi is going to cry to the UN…Boo Hoo. The same UN he regularly thumbs his nose at. What a comedian. Hezbollah is just going to watch them, huh? What a f’ing nut. Who is this idiot addressing? AIPAC?

I think Neteneahu needs a lesson and a strong one.

If they found any tunnel that will be a rabbit one.

Israel has become a state that needs war to exist the way living things need air. Unless they are in some confrontation they are never satisfied.