In late September, Israel expanded its anti-Iranian propaganda efforts in order to consolidate the US-Israeli-led bloc and to justify further anti-Iranian actions by the Washington establishment.

On September 27, during a speech to the UN General Assembly, Prime Minister Benjamin Netanyahu claimed that Iran has a secret “atomic warehouse” near Tehran, which has contained as much as whopping 300 tons of “nuclear-related material.”

“In Lebanon, Iran is directing Hezbollah to build secret sites to convert inaccurate projectiles into precision-guided missiles, missiles that can target deep inside Israel within an accuracy of 10 meters,” he stated. He claimed the first site was in the Ouzai neighborhood, “on the water’s edge, a few blocks away from the runway.” The second site, he said, was under the Camille Chamoun Sports City Stadium, and the third site was “adjacent to the airport itself, right next to it.”

“So I have a message for Hezbollah today, Israel also knows what you’re doing, Israel knows where you’re doing it, and Israel will not let you get away with it.”

According to Netanyahu, these missiles are capable of striking with 10m of their given target. Hezbollah is believed to have an arsenal of between 100,000 and 150,000 rockets and missiles, however, a majority of them lacks the precision technology.

Following the statement, the Israeli Defense Forces (IDF) released photos showing alleged Hezbollah sites in Beirut that the IDF said are being used to hide underground precision missile production facilities. The IDF claimed that these sites are currently being constructed with Iranian assistance.

According to the Israeli version, Hezbollah began working on these surface-to-surface missile facilities last year.

During the UN speech, Netanyahu vowed that Israel would act in Syria, Lebanon and even Iraq “to defend against Iran’s aggression”.

Iranian Foreign Minister Javad Zarif slammed Netanyahu’s claims on the secret nuclear site in Twitter. He decribed the speech as “arts and craft show” and noted that it’s time for Israel “to fess up and open its illegal nuclear weapons program to international inspectors”.

Speaking to IRNA, the Iranian foreign minister added that “Netanyahu must explain how Israel, as the only possessor of nuclear weapons in the Middle East region, can put itself in a position to level such brazen accusations against a country whose [nuclear] program has been repeatedly declared peaceful by the International Atomic Energy Agency”.

Earlier, the deputy head of Iran’s Revolutionary Guards warned the U.S. and Israel to expect a “devastating” response from Iran, accusing them of involvement in a September 22 terrorist attack on a military parade in the city of Ahvaz that killed 25 people. While ISIS claimed responsibility for this attack, the Iranian side says that the terrorists involved were funded and trained by foreign powers.

With the formal defeat of ISIS in the Middle East, the standoff between the Israeli-US bloc and Iran has started becoming one of the main issues shaping the situation in the region.

keep it up jerk off and what you fantasize in your nightmares will become reality. Is a classic case that I wish you with all my energy to get what you wishing for and hopefully it be with out warning because you be the first target.

Israel knows which of its snipers’ bullets are landing in which civilian heads in Gaza so it must know where everything else is.

:-) do they know where their ass from second base , you think?

The expression “too clever by half” describes them. The original miscalculation was to set down in an area of the world where they were not welcome, certainly not in the numbers that materialized. The Blblical justification for their “return” was — and is — just horsefeathers so here they are decades letter sinking deeper and deeper into being a defensive military state forced to make heavy expenditures on arms and also to jealously guard a parasitic relationship with the US and, to a lesser extent, Germany and whoever they blackmail into supporting them financially.

The present-day miscalculation is in thinking that their military superiority is guaranteed forever and that they can freely wage war on their neighbors. Things like long-range rocketry, satellite imagery, excellent ATGMs, and advanced SAM capabilities in the hands of those neighbors WILL place Israel in the position of ONLY having the nuclear option left. Add into that the approach that puts sniper bullets in the heads of civilian demonstrators and justifies it as some righteous exercise in self defense and you have a witches’ brew of stupidity and arrogance on the part of supposed geniuses.

couldn’t put it better myself.

“secret “atomic warehouse” – so secret that only Netanyahu knows about it.

This is a variation on the Goebbel theory that if a lie is repeated often enough people believe it. In this case Bibi is repeating it often so he himself can believe it.

Too bad that all Israeli “intelligence” work become drawing on water with a very simple sightseeing, as the Lebanese foreign minister formally invited all ambassadors in Lebanon to visit the sites that Israelis claimed to be “secret missile sites” to see for themselves.

There will come a day when Israelis will NOT lie, cheat, steal and murder and become honest, humanitarian and responsible… Can you imagine? I can’t!

I can… when they become extinct.

The British Secret Service is investing into Israeli military…. the ranks of the Israeli Army has big british Money… Invested.
Investigate and understand what is actually going on.
The Russian Gambit fell through…

Everything about Israel, deep down to its putrid core, is British deep state.

The ideologies, mythologies, and geopolitical strategies of the State of Israel, down to the minutest details, are the handiwork of a handful of Britons. In particular there was Orde Wingate, a representative of the Amery and Rothschild interests in the 1930s and a top British intelligence officer in Palestine. Moshe Dayan recently said of Wingate: “I remember Orde Wingate. And I salute him. He taught me and many another Israeli soldier everything we knew.

His contribution extended to programming every minute detail of military strategy for the Haganah, thereby providing the entirety of Israeli military orientations from the 1948 declaration of statehood through to the present. According to Mosley, Wingate in 1938 authored “The Jewish State — Security and Defence, Transition Period,” which is to this day “one of the most treasured Israeli documents.” Mosley labels it a “brilliant forecast” of the needs of the state, how much these needs would cost, which “strategy and tactics the Arab states would use to upset the new state,” how these could be defeated, and “what measures should be taken to mobilize and inspirit the civilian population and grid industry and agriculture to the task of keeping the international machine in motion.”

So successful was this strategy outline, Mosley reported, that Wingate’s advice has been followed, almost to the phrase, by the State of Israel. … It is still a practical paper which they constantly consult.”

The British spook who built the army of Zion
p.8-9: http://wlym.com/archive/campaigner/7812.pdf

Yes the day will come, when The Saviour will come.

This is reality here, and has nothing to do with any magic sky fairy.

That was good move by Lebanese. I just doubt it will mean anything on long term. Remember Hariri case? Nothing changed even tho Zio Saudi coalition was revealed as having their fingers in it all.

These Hezbollah owned precision missiles are for defenses in the fight against terrorists.

This day in 1827, Russia captures Yerevan, the capital city of Armenia, and liberates Armenia from a 1000 years of muslim occupation. It happened during the Russo-Persian war of 1826-1828. Generals Ivan Paskevich and Roman Ivanovich Bagration entered Yerevan as liberators of Armenians! 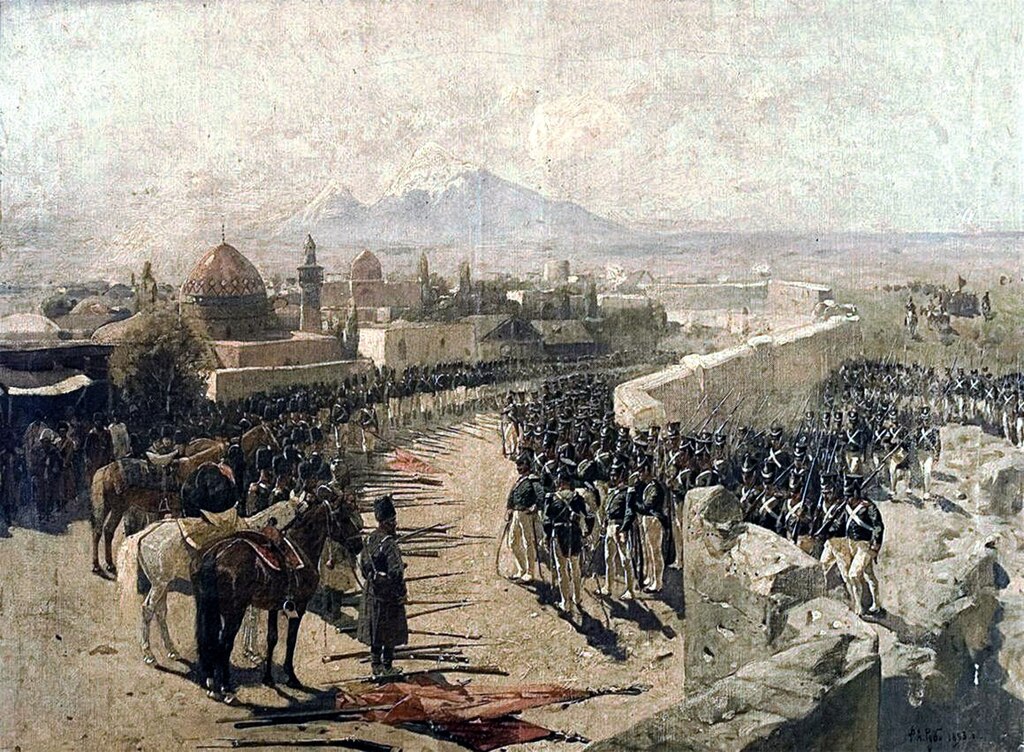 I sincerely would advise people not to read into to this much. As previously stated many times by myself and others who are familiar with the Hezbollah-Israeli conflict, Israel just doesn’t have the operational initiative here. They will invariably be the ones who will attack Hezbollah first and subsequently play by Hezbollahs rules of engagement. It’s a disaster for Israel no matter how it plays out with the only real ace in the hole for Israel being the massive amounts of damage it cause to Lebanon structurally. But this will come at a cost for the Israeli state.

Recent developments regarding the S-300 deployment to SyAAD forces and many other Russian systems will and can ground the Israeli Air force operationally over Lebanon if Syria wills it (The latest Israeli strike against was a tactical victory but a MASSIVE strategic loss). Israel is a small nation and going to war with Hezbollah would put its economy and ability to function as a state in a “state” of shock so to speak. All Hezbollah needs to do is aim its missiles at Israels air ports, sea ports and centers of commerce (thats only if Israel decides to bomb Lebanon indiscriminately). The Iron Dome, Davids Sling and patriot systems cannot handle the amount of missiles Hezbollah will rain down on Israel, so damage will happen whether or not Israel thinks it can counteract it sufficiently.

Israel, to get the missiles to stop coming, would, more or less, have to invade Southern Lebanon in full and fight Hezbollah street by street, building to building, town by town. The loss of Israeli soldiers will be great and thats a price the Israeli high command has to take into account when going to war with Hezbollah again. The advance into Hezbollah held and fortified territory would need Israel to bare its military might in full.

Countries and shipping companies won’t dock tankers and cargo vessels in a high conflict zone, in addition planes will not want to land at Ben Gurion air port or any other Israeli Air ports under constant missile barrage.

But I digress, Israel is still a strong and highly capable military that can and will inflict maximum damage to Lebanon out of pure spite if the fighting gets bad enough but at least that spite will be reciprocated back at Israel in kind by Hezbollah.

Sincerely speaking, I think the Israels thought they could take on Hezbollah again and beat them but that time has past. It will cost so much and possibly lead to a outright military defeat for Israel (Israelis are pridefully arrogant, with a Hubris the size of Texas so…).

Iran counter to Israel through the support of Hezbollah is something the Israelis are really angry about and have no good solution to. Lebanon on the other hand in safe from terrorists for the most part and has a good sense of sovereignty due to sacrifices of honorable Lebanese men and women that care for their nation and people.

Hezbollah have trained a flock of pigs to fly over the border and drop bombs on Israeli synagogues.
No honestly they have.
Nettanyahoo said so. He held up a picture saying “The pigs are here.” and he was pointing to a synagogue in Jerusalem.
Hayley and Trump agreed to provide anti-porcine missiles.
You just can’t trust these sneaky Hezbollahs.

Honestly, you didn’t know that swine can go airborne?

What if the Russians where to use Iran as bait to get retribution?
Israel is not what it used to be… but they are not retarded. they will not attack. Iran has a short window of opertunity.

It is NAKED AGGRESSION by Ashkenazi Jews

“Hezbollah is believed to have an arsenal of between 100,000 and 150,000 rockets and missiles”
Well, that’s what Israel claims and Hezbollah happily repeats it, both for different Propaganda purposes. But is it true or at least likely?

It’s likely. That’s why Israel did not attack Lebanon since they got pwned by Nasrallah. Check his ‘surprises speech’. If it’s not taken down from everywhere lol

The same goes for Lebanon, the foreign minister (along side the army and journalists) went to the locations pointed by Israel to find one thing: nothing.