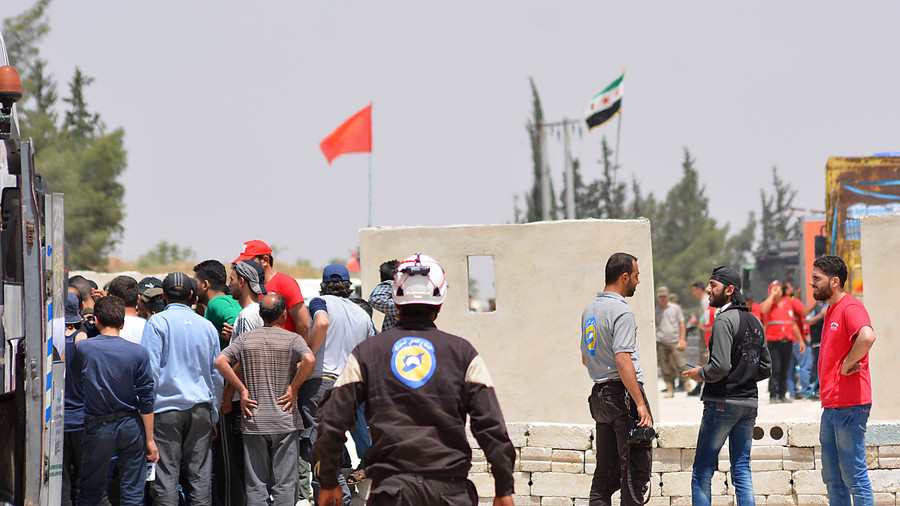 FILE PHOTO: A member of the Syrian Civil Defence (known as the White Helmets) walks near buses as a convoy carrying opposition fighters and their families from rebel held areas south of Damascus on May 6, 2018. © Rami al SAYED / AFP

Israel is working to hide the evidence of special propaganda operations carried out by the US-Israeli-led block against the Damascus government in Syria.

According to the Israeli Defense Forces (IDF), Israel transported several hundred of the White Helmets and their families from the southwestern part of Syria to Jordan overnight Saturday. The IDF described it as “a humanitarian effort” at the request of the US and European countries.

The IDF claimed it engaged in the “out of the ordinary” move due to the “immediate risk” to the lives of the civilians in the area. The move came as Syrian government forces, backed by Russia, were finishing their operation to defeat Hayat Tahrir al-Sham (formerly Jabhat al-Nusra, the Syrian branch of al-Qaeda) and its allies in the southern provinces of Daraa and al-Quneitra.

The “civilians” evacuated by Israel were evacuated from the militant-held area.

According to Jordan’s official Petra state media outlet, the number of evacuated persons included 800 White Helmets members and their families.

Germany’s Bild newspaper reported that a convoy of dozens of buses crossed the contact line between the Israeli-controlled area and Syria late Saturday. Then the convoy was escorted to the Jordanian border by Israeli police and UN forces.

The White Helmets is an infamous Western-backed organization, which according to Syrian, Russian and Iranian governments as well as to multiple independent researchers, has been involved in staging chemical attacks and other propaganda actions in order to assist the US-led block in its attempts to overthrow the Assad government.

One of the most prominent cases is the “Douma chemical attack” on April 7, 2018. MORE ABOUT IT HERE

According to Syrian experts, the key goal of the evacuation of the White Helmets members is to not allow forces of the Syrian-Russian-Iranian alliance to question members of the organization over their acitivites and to prevent further leaks and failures how the mainstream narrative on the conflict has been created through special propaganda operations.

ISRAEL EVACUATES 800 MEMBERS OF WHITE HELMETS AND THEIR FAMILIES FROM SYRIA TO JORDAN, It’s done under London request !

These are the leaders of Al Qaeda and the Mossad/CIA/MI6 assets. They are getting their people out. The White Helmets are a hoax is an intelligence operation.

They have failed and miserably at that, in attempting to topple the Govt of Syria.

Kudos to Assad the Great, SAA, Russia, Iran and Hezbollah!

When you ask people the best in their life, it may not be a stressful holiday somewhere on the beach or money, but right to live in their own lslamic state. The right is surprisingly something closer and more natural than the right to travel to foreign countries. How big would it be if Islamic state banned their citizens from traveling to the decaying nations of kufr, but how quiet we are about to pass the river. https://i.imgur.com/dP5D0fG.jpg

Our hope is not optimism. There is no belief that something is going to work well, but the certainty that something makes sense no matter how it comes down.

Dude – you are the same Israeli posting pro-ISIS drivel as before. It is a very transparent charade.

Moshav-Yatzitz? Nevatim Air Base is only a few km southwest of there, and long known as a nest of painfully-transparent hasbara. They used to be good comic relief at one time. Now, they’re simply annoying.

This one wasn’t the brightest – used town name for account until mocked and changed it.

You have no right to live in an islamic state

You’re right but White scumbags (helmets) was important part of that intelligence operation.

True indeed! White Helmets worked with the satanic U$, Israeli and Western intelligence embedded in them. Russia should bomb the buses that are carrying the ‘white helmets’ and the embedded spies operatives!

If i was the white helmets I would try to disappear

Why should western countries accept israhells war criminals? They created them so they should keep them.There are enough israhellI made Isis terrorists in Europe, This racist israhellI genocidal regime must be destroyed, for the sake of peace on Earth.

same reason, they bring in millions of alleged refuges and changing the demographics of europe. .

It is not Israel but Khazarian Magog instead. Real Israelites are not AskheNAZIS.

Every journalist knows that Israel, White Helmets, ISIS, Al-Qaeda etc are US and UK proxies. This is 5th generation war in which a country forces change their labels and attack a country.

Very likely that the US and Co were afraid of that their Masterplan with bombings due to Fake attacks would be revealed.

bla blabla ..thats the past…..talk about the future of white helmets….they are going to be relocated in different EU countries including Germany,UK,Netherlands,France those folks are payed terrorists and assassins.And not a word from any EU politician.Nothing in main stream media.The head of WH could not even enter the USA for the oscar ceremony due to “terrorist activities”.LOL. And the fucked up european jew slaves do as their masters tell them.What a pathetic continent with millions of its citizens in the deep dream state of mind of denial.

unlike US, that is fully awake right?

but they dont take any terrorists and pay for them, give them housing medical care,… in my country its 891 euro every month with zero work….also a apartment, free medical care,free school,free driving licence, free artificial fertilization, …..same procedures for germany , sweden, netherlands,france,belgium

in mine is even worst

The white helmets a terrorist organization has lest Syria victory to the people lovers and defenders of sovereign, at last the world can know why there was no justification to attack Syria, they have taken their infidels, losers, degenerate bustards destined to the dustbin of history, we hate you

Zionism = EVIL 3 hours ago Zionists and US are using Iraqi Kurdistan to spread Wahhabi terror into Iran. There are 1500 IDF, MOSSAD and CIA agents in Arbil alone training and arming the headchoppers. Iran and Iraq must end US and Zionist presence and bring back Arbil into government control. If the Turks can bombs the treacherous Kurds at will, Iran should do the same. ++++++++++++++++++++++++++++++++++++++++++++++

Waiting for news of ISIS group in SW corner being evacuated by Israel . :DDD

Jordan does what it is told .

Too bad Syrian or Russian jets didn’t drop a few bombs directly on top of the scum right as they were crossing.

A world wide hunt to bring White Helmets to justice!

Are you still half asleep?

I think justice would be subjecting the convoy of buses to a real Sarin gas attack.

Don’t know what you are referring to. Now that they are escaping Syrian justice, and will be protected by various agencies, don’t you want a popular movement to hunt them down? The chance of catching them on the battle-field just disappeared. So what is your suggestion?

apologies if I been sarcastic, but was not directed at you, as a person, but to the word you used justice. There is no justice and there is no popular movement, as you put it. Unless you mean vigilantes.

To my opinion it is good when we suggest something, to be practical and doable. So based on the reality on the ground, they are already on their next assignment in europe and the balkan area. So who is going to hunt them in your opinion?

We need to start demanding – from politicos, police, everyone – that these war-criminals that are masquerading as rescue services must be detained and prosecuted as war criminals. If we do nothing they will get away with it. As hamlet said – nothing comes out of nothing! If there is no popular demand politicians will do precisely nothing. We need to put the pressure on!

ok it seems your heart is in the right place, but you failing to understand, that you be asking from the ones who created them, financed them and send them there to do their deeds, to arrest their creations and by extension themselves.

Have you, not learn anything from the last 30 years at least? What you suggesting it may happen, in a perfect world and this one we live in, is far from that. So digest reality, organize your self for what is coming if you can, or lay very low, until the dust is clear.

The Terrorist State rescues the terrorists… is anyone surprised?

Bye bye al nusra media team. Too bad you didnt make a we lost video before you left.

Who thinks they will make more fake attacks whithin their new host countries. I wouldnt surprise me one bit.

I hope one of them comes to my city…i got a crusher to show them.

I think they only left from the southern part that is under the control of Syria now. Beside they need them now in kosovo and albania, so they start the second part of their scenario, in the Balkans. The ground in greece, is already set.

The dwarf abdullah of Jordan must be sweating bullets and shitting himself in fear. His country has been made the trash tip of the loser! Fuck the half-Yankee!

The British intelligence agency’s chemical weapons narrative is falling apart everywhere – the White Helmets in Syria are a major threat if captured to spill the true story, ie al-Nusra used sarin smuggled into Syria assisted by Turkish/NATO security services, whilst in UK the official Novichok narrative gets more ever more incredulous by the day.

Well this article isn’t partial at all. [Sarcasm]

So this is true democracy at work. This is the US clearly demonstrating how serious they are about combatting “terrorism”. No choice, how do you get people to make award winning propaganda if when they get in a bind, you abandon them? Ultimately snuff films are illegal and it’s high time they faced charges for it instead of getting bonus treatment.

One of the most defining elements of Empire is the avoidance of Justice. Ask Bill and Hillary how it works.

Well they needed the skills of the White Helmets in Hollywood in case the Hollywood Writers go on strike again.

Can anyone imagine how bitter this pill must be for Israel and their ZOG US government? Of course we,(the US people) will believe our GOV’s story about these terrorists. It is still amusing to watch the cabal having to protect and absorb these vermin back into their societies.

Clarifies how much support they enjoy under the Syrian population. No need to hedge: zero (0).

Why to Jordan, why not to Israel?

Because you don’t shit where you eat.

So, Anglo-Zionist fascists are going to go into the open confrontation (war) with Syria & Russia. Well, if so then …

So let me get this straight… The criminal White Helmet murderers and psychopaths have been allowed to escape the clutches of the SAA that would have rightfully put them all on charges of murder and have crossed over the border into the psychotic state of Israel?

Yes, these fraud mass murdering “white helmets” have definitely gone home to their families in Israel and/or to be “redeployed” at some time in the future by their psycho Israeli paymasters!

Contract headchopper saboteurs to be used by Zionatoyanquistan against any Eu country that rebels at some point. Hungary,Poland,greece take note!! One day we will wake up and find out that Hungary has had some poor Moslem minority living there for centuries and orban is killing his own people. Then we will see hungarian “civilians” fighting against him and zionatoyanquistan will have “a duty to protect”.?