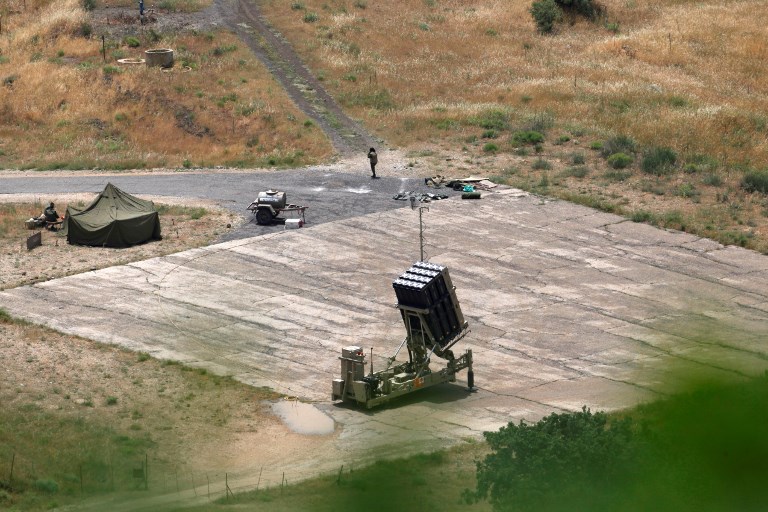 BREAKING: 2 rockets were fired from Lebanon toward northern Israel. 1 of the rockets was intercepted by the Iron Dome Aerial Defense System & the 2nd rocket fell in an open area inside Israel.

We remain prepared to defend Israel on all fronts.

In response to the 2 rockets fired from Lebanon toward northern Israel, IDF artillery just struck in Lebanon.

There were no reports of injuries or damage, and the army said there were currently no special instructions for residents of the region.

Defense Minister Benny Gantz said that Lebanon was responsible for the overnight rocket attack since it “allows terrorists to operate within its territory.”

“Israel will act against any threat to its sovereignty and its citizens, and will respond in accordance to its interests — at the relevant time and place,” Gantz said, adding that Israel “will not allow the social, political and economic crisis in Lebanon to turn into a security threat to Israel.”

Gantz also called upon the international community to act to restore stability to Lebanon, amid what the World Bank says is one of the world’s worst financial crises since the 1850s.

The attack came some four hours after Syrian state media said Israeli aircraft launched a number of missiles at targets near the Syrian city of Aleppo and following clashes on the Temple Mount between Israel Police and Muslim protesters on the Muslim holiday of Eid al-Adha.

The Israeli military believes the rockets were fired by a Palestinian group in southern Lebanon, not by Hezbollah.

In response, the army said it had fired artillery shells at the source of the rocket fire, in Lebanon’s Wadi Hamoul region. This was also the area from which rockets were fired at Israel in May.

The reported attack took place on the eve of Eid Al-Adha, one of Islam’s holiest holidays.

Israel has launched hundreds of strikes against Iran-linked military targets in Syria over the years but rarely acknowledges or discusses such operations. Last month, Israel reportedly carried out an attack on targets in central Syria.

Israel fears Iranian entrenchment on its northern frontier, and it has repeatedly struck Iran-linked facilities and weapons convoys destined for Hezbollah.

Zionist agenda is to provoke destabilization in Lebanon which is facing social and economic meltdown. The only obstacle for Zionist designs is Hezbollah and if push comes to shove, Hezbollah will fight a no holds barred conflict no matter what the costs as the Zionist scum are incapable of fighting against a well armed foe who can hit back. The Zionists are casualty averse and a ground war is exactly what Hezbollah has in mind..

If the Israeli regime attacks Lebanon, the whole of Lebanon will unite behind Hezbollah.

Indeed, most of the one million Palestinians, most Sunnis and Christians already support Hezbollah which is now far more powerful and battle tested than in 2006. The Zionist aim is to work with the Saudi and Emirati funded Salafist Wahhabi terrorists who the CIA is trying to smuggle through into Tripoli, that is the reason Hezbollah is strengthening its presence in the Qalamoun-Arsal region. A whole new Assyrian Christian militia has been formed by Hezbollah to police the Chouf region as well as the Druze are untrustworthy as the Kurds, but are few in numbers and will be committing suicide if they aid the Zionists. The Zionists are resorting to terrorism to set off a civil-war, but the Lebanese demographics have changed completely, so unless they invade themselves and suffer unsustainable casualties, it is check mate. Hezbollah is prepared for a very long war over a vast region.