“The defense establishment conducted a launch test a few minutes ago of a rocket propulsion system from a base in the center of the country,” the ministry said. “The test was scheduled in advance and was carried out as planned.”

Giving no further details, international reports were rife with speculation over the nature of the rocket, with many saying it was a nuclear-capable ballistic missile. This was enough for Iran’s Foreign Minister Mohammad Javad Zarif to go off, saying in a statement posted to Titter: “Israel today tested a nuke-missile, aimed at Iran.”

E3 & US never complain about the only nuclear arsenal in West Asia—armed with missiles actually DESIGNED to be capable of carrying nukes—but has fits of apoplexy over our conventional & defensive ones. https://t.co/r4EqXkhcCN

And he further complained that the West looks the other way when it comes to “about the only nuclear arsenal in West Asia,” but that it “has fits of apoplexy over our conventional defensive [rockets].”

The mystery Israeli test was significant enough to require the temporary diversion of all inbound flights to Tel Aviv’s Ben Gurion Airport.

Israeli media publications also considered the possibility that it was a ballistic missile test, likely nuclear warhead capable surface-to-surface Jericho system, an intercontinental ballistic missile which according to foreign reports can support a nuclear payload.

It comes at a tense time in the region following Israeli airstrikes on Syria and even Iraq, against what the IDF alleges were ‘Iranian targets’. According to the Times of Israel:

Israel does not publicly acknowledge having ballistic missiles in its arsenals, though according to foreign reports, the Jewish state possesses a nuclear-capable variety known as the Jericho that has a multi-stage engine, a 5,000-kilometer range and is capable of carrying a 1,000-kilogram warhead.

And according to a Avi Scharf, the editor of the English version of Haaretz newspaper, the missile test may have had a flight trajectory deep into the Mediterranean, as far West as past the island of Crete.

To track and handle it all, IAI telemetry plane + at least two Israeli AF g550 aewc/shavit spyplanes + hercs flew all the way out past Crete pic.twitter.com/s9VyBQLVKJ

Tehran officials, while complaining about the provocative rocket test which they claimed was an ICBM, vowed they are still “determined to resolutely continue its activities related to ballistic missiles and space launch vehicles.”

Israeli residents captured part of the rare launch on video:

Washington has repeatedly condemned similar Iranian launches, even while the program is not formally banned under the 2015 JCPOA, and has leveled sanctions targeting the Islamic Republic’s ability to produce advanced missiles.

I think you know what to do, Iran…

israel has to go once and for all. israel deserves no mercy. israel is of no value and won’t be missed when it’s finally laid to rest. palestine for the palestinians. diaspora 2.0 for the squatters and their embedded brethren around the world.

Small illegitimate off-spring of Yanki Terror-Gangsta , involved in the murder of JFK, attack on US Liberty murdering 34 US servicemen and the 9/11 attacks murdering over 3100. And all those other murderous instances in between, many of which we know nothing about. I never thought that I would ever be seen aligning myself with the NAZI’s, unfortunately, as days go by one at a time I have just about reached their conclusion. These people can only be judged by their actions and their actions are the most reprehensible on the planet. In the words of Dr. Who’s enemies the Daleks the time has come to…”Exterminate them”. If there are any good Jews in Palestine they should leave asap or face their Supreme Satan in Hell’s Fire.

This is not fair. It seems that Iran must also have nuclear weapons. Considering its very small area, Israel will not survive Iran’s attack. All Iran needs is to pass a few megatons of “parasitic removers”. and huusssh .. Parasites disappear permanently from the body of the middle east. Iran will also suffer very seriously if Israel had a chance to counterattack by launching its nuclear missiles before they were destroyed, but given its large area, in the long run Iran will recover and be able to start again. What is very important and necessary for Iran to do is embrace its powerful allies to silence the US if they want revenge after Israel is destroyed. Unfortunately, Palestinians will also be victims in this scenario.

I love your comments bro, you are the most deluded Ruski here :)

What’s the matter, soap bar? :D So you’re a tough guy huh? Or pretend to be tough? You claim to be an Israeli reserve and you once said that the avatar you used was your real photo? Haha Sorry I had to break your daydream.. Your avatar is a photo of a member of ‘Shayetet 13’, an Israeli navy special force that was kept secret to the public, which was once several times beaten up by Hezbollah in southern Lebanon! Who are you kidding here kid… You just an poor idiot from Ramat Elchanan village in Bnei Brak. An idiot who pretends to look tough. You just make yourself look more stupid here. Now go play at kindergarten, Stupid zionist! 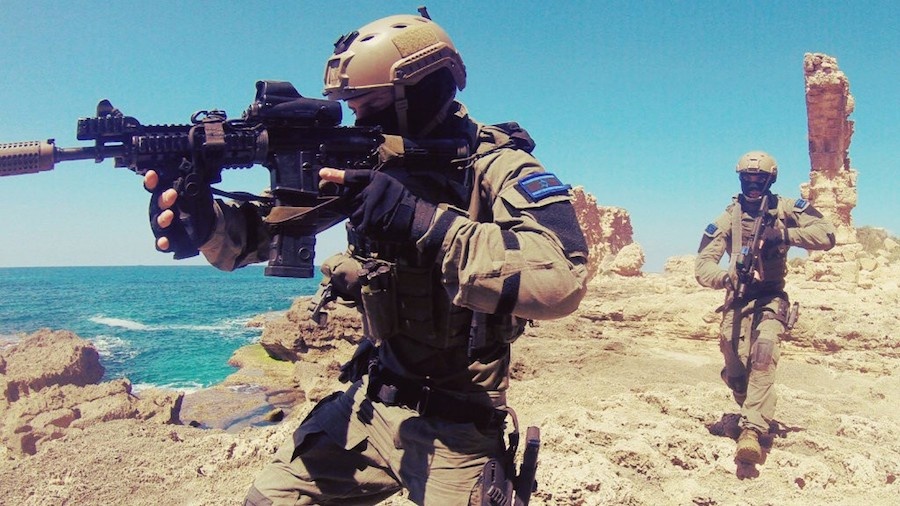 It is from the practice we had, and that is my unit. I never said it was exactly that pic, but I am a reserve there. Why do you think I keep saying I will fuck your Hamas friends? clown.

Aw … so sweet … the fucking zionist village idiot threatened me.. wuuahaha. But never mind, if it can make you sleep well at night little girl… lol. Now no one will take you seriously idiot. O well.. You won’t want to meet me in person, it won’t end well for you, soap bar!

So how about you come over here? afterall, you are in my territory.

Yeah, nukes, here we go again, nukes are just an bomb, big, yup, but stil just a bomb, and can be fitten inside the trunk of an Lada from the 70s, means that everything can be used, and then to what extent is ISISrael to use this, against Iran witch by areal is muhc, much larger, and the only viable is to where is the targets, if you dont have spesific targets, they are useless, but stil, just an big honking bomb, and we all know Yankikes and the ZioNazis loove big boobs, sorry, bombs.
And lets for the sake of specualting, the Joohos did bomb with what 100 nukes, and to bomb what, Teheran, where they need a lot of them to other places, this nukes cant penetrate solid stuctures anymore than convential bombs and some of their so called bonkerbusters have to be dropped more or less vertically on the target, witch of course isnt a problem if the enemy have no weapon systems to shoot at the incoming planes, high altitute of course, like the Joohoes they like to shoot from an distance or hide behind civlians, witch is an Joohoes speciality, you know, sniping children from behind walls/fortresses.
Clap, clap, clap.

But, if I was an Iranian, they need Only to hit some few spesific tagets, like Dimona, etc, and crush the pools and reactores, etc, and as far I know, ISISrael have several, and then what, Yankikes and Wankees in general because ISISrael is an tiny shithole.
So, to sum it up in an fascion even TrumpTards, can understannd, nukes are not an option of course if you are nutts, it maybe, and I know the Joohoes are staggering bonkers.

So, since I bothered to answer I have to clear up some few missunderstandings about whom is an Jew.
AzkheNazis are European fake Joohos, Herbrews are the real ones, but they have never been an large comunity, in the late 1800s, they where mainly confined to large citys, acording to the British papers somewhere around 3% of the total population in the Palestinian region, pre-Balfour and have not been an large tribe, mainly because they are native South Arabian penninsula people originating in the Yemen/Oman region, and have of course due to time, expanded thru travel etc to the larger region aka the Levante.
The second, is Shepardic Jews, witch are basicaly Berbers, and Berbers are originaly europeans, since they by blood is like the Basque, and even I am from the same blood line, all thoe I am on the other end of the european mainland aka Nordics, then the same blood line is found in Sicily, Sardinia, Korsika, Catalans, Merovingians, the ancient Egyptians where North european, the ancient people around the mediterain sea was european, to the ancient ISISRaelis where european, and so on, the problem we have to day comes from an fake history, nothing else.
The reason for most of the present Jews looks european is that the original Khazars are watered out thru the centurys pased, like the North African Berbers and to the Levante, do notice Muhammad, witch I could tell you about, was an Red headed European, and blue eyes.
Etc, etc.
I am cutting it short.
Then we have other european people like Slavs, the Read headed, etc, to the ancient Pikts, and so on, the founders of Rome, the Etruskans (et to ruskise) etc to the Bulgars whom where light and blue eyed, but of course, I dont look like an blond viking, I am dark, but my family looks like what you would find in Basque, its eary to see images of people from this regions.
The Khazars, and all that, is been hidden behind another historical nonsense, but mostly thru the creation of what some use to day, the so called Indo-european people, this are in an sense their own people, but by large Turko-Mongols, since their homeland is north of the black sea and to the central Cauchasus plains.
They stil are there, but their expansion have been what is history.
I will take that another time.
But the Jews to day is an mix of several factores, the main Khazarian is eastern european, the other is from the Iberian peninsula.
And to day, the Truks, the Kurds, the Khazars, etc, are the same.
Aka the indo-european R1B.
Why you have Blue eyes in India etc, is due to other north bound people, like the Russians slavs etc to the other european people, the same race found in China and in the Siberial region.
Witch I have hinted about but will of course of time alwes that, deal with later, mainly due to again faked history and somethings have even been just cencured away.
Jesus was infact European.

I have no doubt that it is a nuclear-capable missile.

And I have no doubt it is fairly long-range.

But I very much doubt Israel has a true ICBM.

I don’t think America would permit that potential threat to itself.

Israeli trolls claim Israel’s Jericho III has a range of 8-10,000 KM. The EU/Russia should be asking why Israel needs such a range.

Have you not studied? The psycho state of Israel wants to have ICBMs to rain down their nuclear arsenal on all major nations on the planet as part of their sick and twisted “samson option”… The Jew dick suckers in America are willing to give them that technology to see these psychotic freaks hit all major American cities if necessary…

I hope Israel has several dozens of them attacking at once ‘cos after the first one falls on Iranian soil, Israel will be obliterated in history’s largest ever conventional missile saturation barrage. The Fake Jew khazars are idiots for saber rattling – they are starting a war that will lead to their extinction in 1 week.