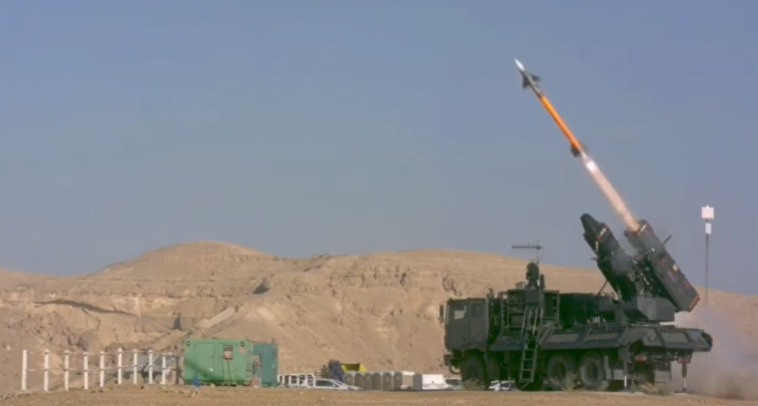 Israeli defense contractor Rafael Advanced Defense Systems announced on February 25 that it had completed the development of a ground-based air-defense version of the I-Derby ER air-to-air missile.

Rafael concluded a series of tests on the new missile earlier this week. A ground launch to test the missile’s command and control, navigation, and flight trajectory capabilities we preformed. Footage of the test were released by Rafael.

“This week, we completed a series of tests in the development of the I-Derby missile in its latest version [ER] which allows for Beyond Visual Range [BVR] launches over 100 km,” Pini Yungman, Rafael’s head of air and missile defense systems division, said. “This is a key milestone in the development of a missile with some of the most advanced capabilities, giving it significant interception advantages in air-to-air battles, as well as ground-to-air air defense applications.”

The I-Derby ER, a member of the Python air-to-air missile family, is propelled by a dual-pulse rocket motor. The missile is equipped with an onboard active radar seeker.

The light weight of the I-Derby ER allows it to be adapted on many fighter jets, including the F-16, F-15, F-18, HAL Tejas, Typhoon and many others.

In May 2019, it was reported that India was planning to arm its Russian Su-30MKI fighters with I-Derby ER missiles. A year earlier, the Indian Air Force selected the Israeli missile to arm HAL Tejas fighter jets.

It is unclear yet if the I-Derby ER is set to enter service with the Israeli Air Force, which didn’t buy some of the missile’s older variants due to budget cuts.

none of their shit works lmao

Keep saying it to yourself, maybe in the end you will believe it.

<>
Reply to  Assad must stay

Don’t worry, it will be put to the test sooner than you think.

Wrong, Assad-ians don’t even have a functioning Air force for Israel to put I-Derbys to a good use.

Its better to augment LOROP pods with SPICE 2000, Delilah and Popeyes.

With all the wealth and know-how transfered from the terrorist Ziocorporatism in the West, and even Russia, to the squatters in the Rothschild neocolony in Palestine, they must already have directed-energy anti-missile systems; they got full access to US arsenals either way.

i doubt it, the dopes wouldnt know how to use it

Another great development of Rafael for the IDF, will be very effective in the coming war. 25 days and counting down till the general elections, say goodbye to Bibi “the chickenshit” Netanyahu. protection time is over for you.