On August 13th, Israel Defense Forces (IDF) published plans for the development of the Israeli Air Force in the coming years.

Air Force Commander, Major General Amikam Norkin, summed up the necessary work to improve the effectiveness of the Air Force and their training for the coming years.

Some of the points of the program are designed for a decade ahead, others are shorter-term.

The coronavirus pandemic, the deteriorating economic situation in Israel and in the world, as well as a general view of the strategic situation in the Middle East played an important role in the program.

As a result, it was decided to accelerate a number of plans for the future and implement them in the coming years.

The common goal of all these steps is to increase combat effectiveness on the one hand, save money and use resources more efficiently on the other.

At the same time some other changes (and not only are being introduced such as:

It is reported that already now the Air Force has 6 operational UAV squadrons at 4 different bases and new ones will be created. So the focus is also heavily moving towards usage of UAVs, despite the expanding fleet of manned aircraft.

I wonder what they will do with F16s after all ordered F35s are received. Their jets are upgraded to be integrated with other branches, so not many potential customers also. Keeping them is also expensive.

but if they overspend, there is always the disjointed states of A to bail them out.

The aid dependent Israeli economy contracted by 28.7pc year-on-year during the second
quarter of 2020, according to data published by the Central Bureau of Statistics on Sunday. This sudden decline in the GDP to near recession,after years of a thriving economy, coincided with the coronavirus lockdowns from March, and is the most substantial recorded in Israel for40 years.

when the jew-economy in the illegally occupied palestine implodes and the handouts of american taxpayers’ taxes dries up, it will be a day to remember.

The Americunts are dying like dogs and literally starving as the UN report says that 100 million Americunts are suffering “food insecurity”. I don’t think they can offer much as the UNSC vote clearly showed. Americunts are a global deadbeat joke now.

The US and west in general are in very poor state financially, economically and socially and will not be able to provide more money to a parasitic Zionist regime which has no future. Israel was a bad investment and will go belly up like a ponzi scheme.

Japan … Russia … the USA et al have economic problems too

jews don’t overspend, thats the issue. Thats why I wonder if they already found a client

for one thing, the jew economy is not sufficient to run the country and they are dependent on subsidies from the disjointed states of A plus vast amounts collected from jews embedded/entrenched in different societies in the world – so called quislings and/or fifth columnists (in regard to their host nations).

I don’t disagree with that. They get around 30bln injected into the economy. That is one thing. I am talking about another thing.
My point, I see no reason why they wouldn’t cash in on F16 sales and get rid of unnecessary expense.

would seem a bit precipitous to sell off the f16s if the replacement is the dud f35. not even jews would get themselves into such position although if they do a lot of problems will be done with.

they still will have f15. from technical point of view f35 can easily replace f16, as long as the fix the issues. but i don’t think issues are much a deal. all jets have it, the only thing is that this one costed a lot. Hence wouldn’t hurt to sell f16, to offset some costs.

The USA has to approve to whom they’d sell the planes too … hello?

i wrote that too. read the full thread before posting

Since the Flop-35 is a hangar Queen I assume they will need every F-15 and F-16 they already have.

The large fighters are an incredible platform. F15 only needs 1 wing to land. :) 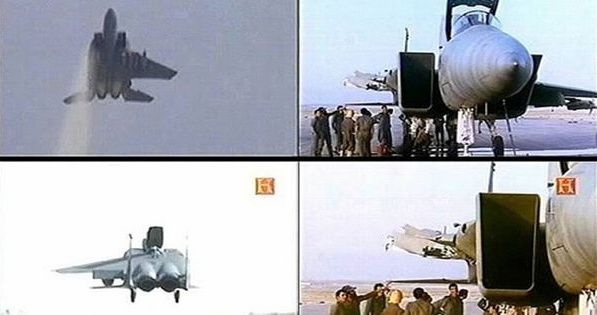 Iran’s defense minister revealed that Tehran is set to receive the Su-30 fighter jet at an undisclosed future date.

Good news.
Iran will need at least 300 of them at a bare minimum.
Combined with SAMs Iranian airspace should be a one way ticket for every intruder.

Probably UAE and KSA will offer them basses.

I would think of a country that cannot physically go against Israel. Those jets are like keys to Israeli Air Defense systems. Either downgrade which is a waste of money or sell to a country with same air defense systems.

KSA, UAE, Jordan will buy everything us needed to integrate everything :)

Even Turkey’s ally Azerbaijan seems a better option than those 3. But I somehow think India might be an option (if approved by US).
US obviously would prefer Ukraine, but they got no money for western weapons. And they are too expensive just to donate.

Hope they do, as that will be their end too. Dubai will turn into a parking lot as it can be hit by base bleed 175mm artillery from Abu Musa island in the Persian Gulf.

90% of UAE population is foreign born, mostly South Asian and highly paid western expats, a single shell at Dubai airport would shut the place down and result is a real exodus. The Wahhabi corrupt regimes are really living in glass houses.

The order for new F-15X says that the F-35 do not meet the requirements and will not be ordered in large numbers. Just 1 squadron by plan.

Im talking about F16s of Israel not F15s

The stupid paranoid Zionist leeches are scared shitless of Hezbollah, they can reorganize their dumbass to kingdom come, but it will save the child killers. They would be lucky to get off the ground as Hezbollah and Iranian precision missiles will shut down each of the 5 major operational bases in minutes.

The IDF said on Monday that the fleet of Black Hawk aircraft was now being grounded for all non-operational flights after they suffered a number of malfunctions “over the past two months.” Until the end of the investigation into the problems, the fleet will be grounded, the IDF said on Twitter, save for combat operations. The IDF has recently been plagued by a series of accidents and low operational capability.

What sort of punishment of Lebanon do YOU forsee in the next War in Lebanon?

Israel is floundering as Hezbollah gets stronger by the day.

The wicked flee when non pursue…

This is a no protection value propaganda move in my view. Israel has zero geographical depth, especially where modern missles are involved. They can dance and sing but, nothing chnages that.

military management is about preparing for the reference scenarios.
the reference scenario of Israel in 1975 included five, hostile and very capable air forces
Egypt Jorden and Syrias air froces parked on its border
as well as
Iraqi and Saudi air forces within a striking distance.
The Jordanian, Egyptian and Saudi air forces are now
allies of Israel.
the Syrian Air Force was decimated
the Iraqi Air Force is an anti insurgent Air Force
that operates propeller driven aircrafts
Iran does not have the ability to reach Israeli airspace
they are not a threat
In a situation like that Israel can disband their air defense
and park their airplanes on the tarmac and nothing will happen
but because they are jews
and are believe that everyone are out to kill them
they still work on based on a reference scenarios that requires AA and underground aircraft bunkers

Thanks for the opinion Sladin. I don´t quite know what to make of it.

If they need reform, it means they weren’t as powerful as they’ve always falsely claimed, fear can be seen on their ass faces.

Lovely article, we do need to put more focus on the ground forces and not just on the IAF. But overall I am happy with what we have at the moment, although it saddens me to see my corrupted government stopping the army from doing its job.

By concentrating their maintenance in single locations to save money, they are making themselves more vulnerable to rocket attacks. Typical accountant thinking.

is this a rearrangement of empty chairs?