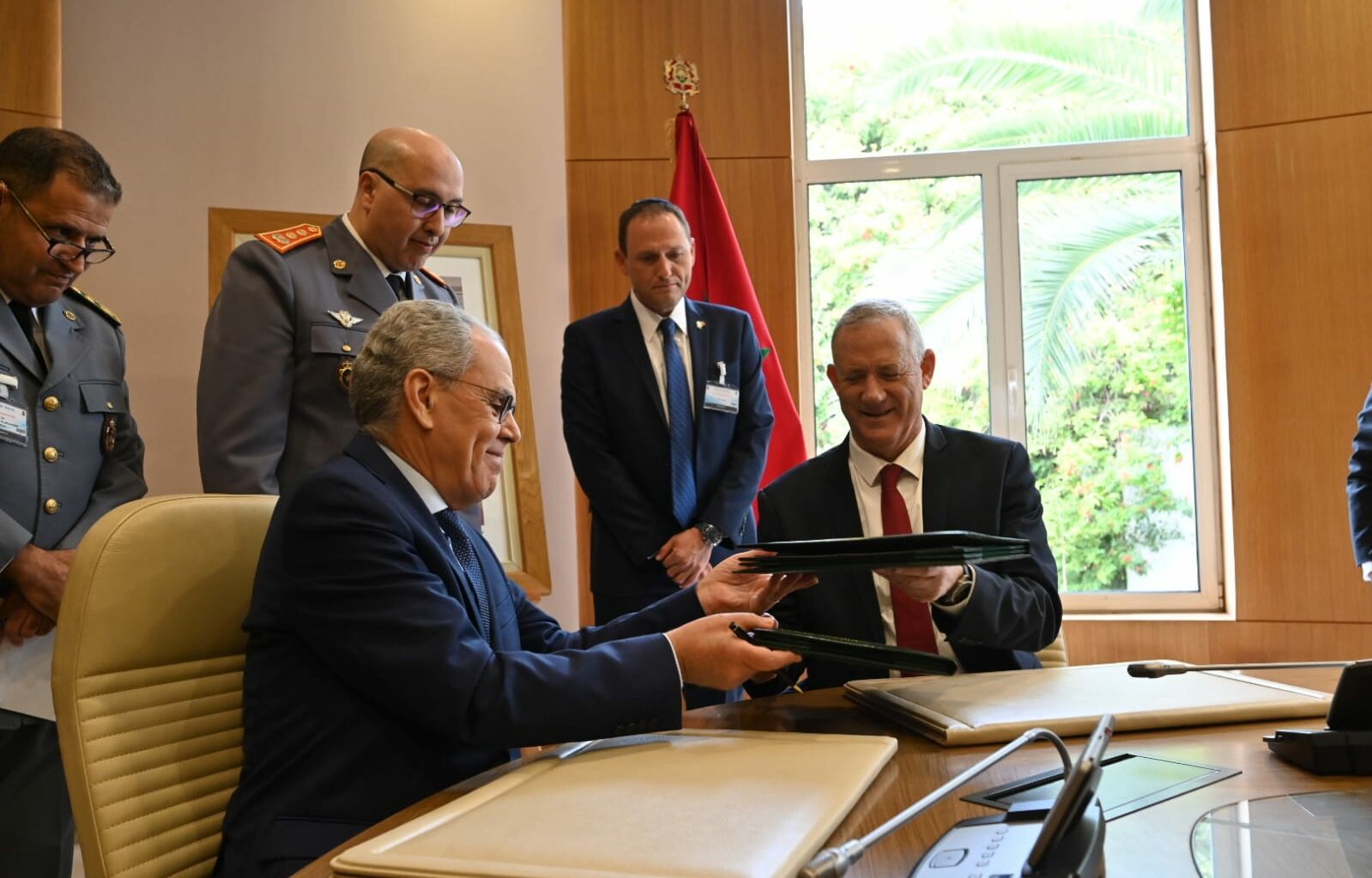 Defense Minister Benny Gantz, right, with his Moroccan counterpart Abdellatif Loudiyi, after signing a memorandum of understanding between the two countries at the Moroccan Defense Ministry in Rabat on November 24, 2021. (The Israeli Defense Ministry via The Times Of Israel)

On November 24, Israeli Defense Minister Benny Gantz signed a memorandum of understanding (MoU) with his Moroccan counterpart Abdellatif Loudiyi, marking the first defense agreement between Israel and an Arab state.

Gantz arrived in Rabat late on November 23 in his first official visit to the Kingdom, who established ties with Israel last year in the framework of the US-sponsored Abraham Accords.

The MoU is supposed to boost military cooperation between Israel and Morocco. The two countries’ defense ministries and militaries will be able to communicate and share intelligence directly.

“We have just now signed an agreement for military cooperation — with all that that implies — with the nation of Morocco. This is a highly significant event that will allow us to enter into joint projects and allow Israeli [defense] exports to here. I think the ties between Morocco and Israel need to continue to get closer, to continue to develop and expand, and I am glad that we have a part to play in that,” Gantz said after the signing the agreement, according to The Times of Israel.

The MoU will also make it easier for Israel to sell weapons to Morocco, who is already showing interest in some Israeli military systems.

According to recent reports, Morocco is looking to co-produce loitering munitions, namely the Harop, with Israel Aerospace Industries (IAI). The Kingdom is also eyeing the Iron Dome air defense system made by IAI and Rafael Advanced Defense Systems.

Morocco appears to be taking advantage of its newly-established ties with Israel to strengthen its military stand in the disputed Western Sahara region.

In the last few months, the Kingdom’s military operations in the region became more frequent. Combat drones are being actively used against the Algerian-backed Polisario Front, who have been fighting for the independence of the region since the 1970s.

So is Morocco just angling to get more drone tech? I’m sure they are looking for an upper hand in their murderous campaign in the Western Sahara region. How much will Algeria protest remains to be seen, I guess.

So moroacccan kinf=g has become slave of zionist by abondoning islamic Values and teaching. NEw war is coming now . Zionist will use moroacco against Algerians who are anti zionist and anit israeli. Moroacco king knows his kingdom will soon fall so he is taking support of zionist US/Israel to c=save but it want save him.

Algeria will tear those Moroccan zio slaves 4 new a$$holes. You can’t even compare Morocco’s military to Algeria’s. Algeria’s armed forces are loaded and stacked with all the latest Russian tech.

The Arabs like to whine about how the Palestinians sold out to the Jews, yet they flock to betray each other with the Zionist.

Moroccans are not Arabs first.

Interesting moves being made.