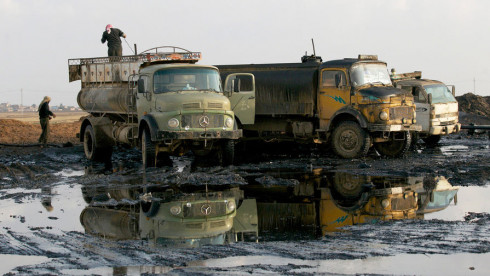 Original by Aleksey Topalov and Elena Platonova published by gazeta.ru; translated from Russian by J.Hawk

Russia is accusing Turkey in financing the Islamic State through its purchases of smuggled petroleum.  Russia’s President Vladimir Putin level this accusation after Turkey shot down a Russian Su-24 bomber. Putin underscored that Russia has known of the deliveries of petroleum from terrorist-occupied regions of Syria to Turkey for a long time. According to experts, Turkey resells oil received from the IS at twice the price it paid the terrorists, and it is not bombing the Islamic State because it would be to its disadvantage, but only the Kurds.

Deputy Secretary of Finance on Counter-Terrorism and Financial Intelligence David Cohen said already at the end of October 2014 that Turkey, Iraq, and Syria are buying oil from IS at a rate of about $1 million a day. Cohen said then that IS financial power makes it rather different from terror groups of Al Qaeda type and its branches, which rely mainly on individual donations.  Another major source of financing, namely ransoming hostages which amounts to about $20 million a year, which is also insignificant in comparison to the oil revenue. Therefore in order to interdict IS financing, one must first break the oil supply chain. The main question here, according to Cohen, is who is the intermediary in these transactions.

Political scientists Igor Yushkov, an expert with the National Energy Security Fund, says that while before the tanker trucks moved in a constant stream, now due to Russian bombing the operation has had to change. “Nowadays the truck columns have to disperse and their payload has grown smaller. Secondly, while before the buyer representatives visited the oilfields themselves, now they have had to organize a new cluster.”

These are the traders who are usually local inhabitants of Syria and Iraq. It is they, at IS behest, take the oil from the fields and bring it to the customers.

The Islamic State is now in control of over 60% of Syria’s oil extraction and 10% of Iraq’s. According to Yushkov, crude oil is being supplied by 10 IS-controlled fields located on the territory of these two countries. The estimates of the level of extraction vary widely. Some say it’s 350 thousand barrels a day, others it’s only 40 thousand. “But in any event the level of extraction is decreasing, due to the constant bombing of the oil fields themselves,” says Yushkov.

Yushkov moreover says that extraction would decrease independently of bombings, because IS lacks a sufficient number of engineers. IS is not developing oil fields, only squeezing them dry.

Member of the expert council of the Russian Oil Industry Union Eldar Kasayev notes that the daily volume of crude which Turkey buys from the terrorist depend on whether the intermediaries can safely cross the border between Syria and Turkey which is guarded by IS opponents.

“Turkey is one of the beneficiaries of oil trade with IS,” Yushkov adds. “Turkey is able to buy crude on the cheap, and then resells it at a higher price. Therefore IS collapse would not be beneficial to Turkey. Moreover, according to unconfirmed reports, one of the firms buying IS oil is owned by the Turkish president’s son Bilal Erdogan”

Financial Times wrote, citing traders’ estimates, that IS sells oil at $25-40 per barrel. World oil prices since the start of the fall of oil prices in July of last year dropped to the minimum level of $42 a barrel.
But according to Kasayev’s data, Turkey buys oil from Iraq and Syria for only $15-25 per barrel. “Then Turks sell that oil at market prices and it then goes into the world, including to the US,” Kasayev says.
Kasayev points out that the smuggled oil delivered by IS militants has been attractive to Turkey from the very beginning due to its low price.
“Ankara is realizing additional profit by reselling it all the while de-facto bombing the Kurds, even though it is making a de-jure argument it is fighting against radicals,” Kasayev says.
Incidentally, Turkish ministries have more than once denied Turkey’s participation in the sale of “terror” oil. Turkish MFA spokesman told the Wall Street Journal, the amount of confiscated petroleum on the Syria-Turkey border has tripled since the war started in 2011. “We are trying to stop the smuggling, but it is very difficult to control that border,” said the Turkish official.
US accuses Assad of buying IS gasoline
In May 2015, when US forces killed one of IS leaders, Abu Sayyaf, whom they called the finance minister of the organization, there appeared unofficial information from US intelligence services that the US had indisputable proof that Turkish intermediaries were the main purchasers of IS crude, according to Observer who cited informed sources within the US military.
“Hundreds of flash cards and documents were seized,” wrote the anonymous source for the Observer, “right now they are being analyzed, but ties to Turkey are so obvious that they could have political consequences in the relationship with Ankara.”
As far as Iraq and Syria are concerned, here the matter is the stuff of anecdotes. Yushkov says that IS sells these countries not crude but rather gasoline, and in Syria it is used by the military which fights against the Islamic State.
“The situation with natural gas is the same,” Yushkov says, “as gas from wells controlled by the IS is being piped to powerplants on Assad-controlled territory.” Eldar Kasayev adds that Syrian gas fields are occupied not only by the IS, but also by other terror groups, including al-Nusra (Syrian al-Qaeda). “Gas

“Havala” to the rescue
Smuggled crude is not the only source of terrorist financing. The fight against the IS is made more difficult by the inability to stem the financial flow and prevent transactions on accounts connected to the organization. Douglas Ollivant, the former director of the US National Security Council section dealing with Iraq, the whole region is a territory of “cash economy, which means it’s difficult to break the chain of financing.”
IS terrorists can actively use the informal financing and accounting system known as havala (in Arabic, “transfer” or “transaction), says Viktor Dostov, the chairman of the Council of the Association of Electronic Money. This widespread in the Middle East system functions on the basis of a special network of agents who act as intermediaries. The sender gives the agent money and password, and the receiver can obtain that money at another place, provided he knows the password. No documents are used, a telephone call suffices as confirmation.
IS can also use crypto-currencies. After the Paris terror acts, the G-7 finance ministers’ meeting discussed introducing stricter controls over financial technologies, including virtual currencies. Reuters later reported that EU leadership is considering “increasing controls over non-banking payment systems, especially electronic and anonymous payments and virtual currencies.” However, according to other assessments IS stores only a small portion of its funds in crypto-currencies, so that virtual currency ban is unlikely to deprive the IS of its lifeblood.