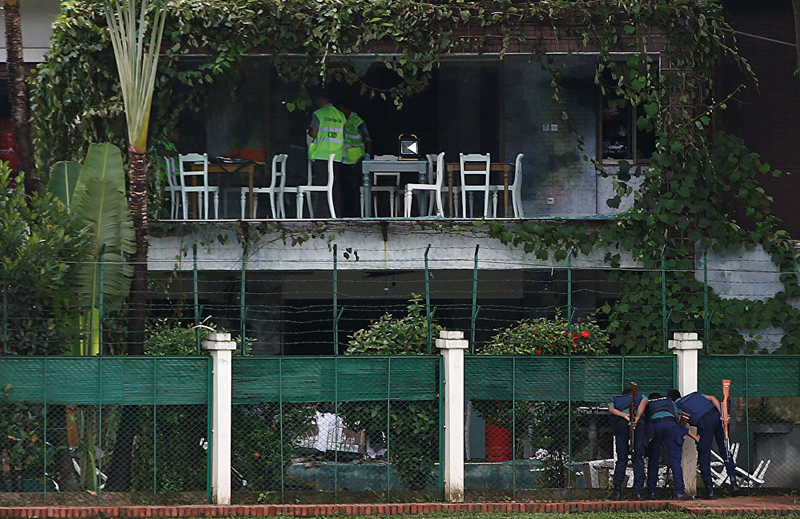 The ISIS terrorist group has said about its plans to repeat terrorist attacks in Bangladesh and beyond until rule by Sharia, Islamic law, is established. Militants have recorded a video in which they said that killing of 20 people in a Dhaka cafe last week “was merely a glimpse of what is to come”, Reuters reported.

The Holey Artisan bakery cafe was stormed by five Bangladesh militants, on July 1. Before to be gunned down, militants killed customers, most of who were foreigners, from the USA, Japan, Italy and India. A restaurant chef was mistakenly shot dead by police commandos during the operation to end the siege, Reuters said, citing unnamed officials in Dhaka.

“What you witnessed in Bangladesh … was a glimpse. This will repeat, repeat and repeat until you lose and we win and the sharia is established throughout the world,” a man, identified as Bangladeshi fighter Abu Issa al-Bengali, said in the video monitored by SITE intelligence website.

The video started with photos of last attacks in Brussels, Paris, and Orlando in the USA that the Middle East-based militants have claimed.

According to the words of the militant, speaking in English and Bengali, now Bangladesh is a part a bigger battlefield, the purpose of which is to establish a the cross-border “caliphate”, proclaimed by the group in 2014.

“I want to tell the rulers of Bangladesh that the jihad you see today is not the same that you knew in the past,” he said from a busy street in the Syrian city of Raqqa.

“The jihad that is waged today is a jihad under the shade of the Caliphate.”

Bangladesh has rejected the Islamic State’s claim of responsibility for the Friday attack and blamed a domestic militant group. However, police declared they were stepping up security in response to the video.

“We are taking this issue seriously. All our concerned units are working tirelessly,” the deputy police inspector, general Shahidur Rahman, said.

According to police, a significant role in organizing the band of young men who carried out the attack was played by the domestic Jamaat-ul-Mujahideen Bangladesh, which has pledged allegiance to Islamic State. Now police is hunting for six members of the group suspected to have helped the attackers.

The political adviser to Prime Minister, Sheikh Hasina, said that online warnings about a possible attack on July 1 had been seen by security officials. They ordered to close major hotels and restaurants in the neighborhood of the cafe subjected to the terrorist attack. “But they missed the actual target,” Sheikh Hasina said.

According to foreign security experts, the scale and sophistication of the attack on the upmarket restaurant showed the level of guidance of international militant groups.

I wonder what Bangladesh did to piss off the Cabal.