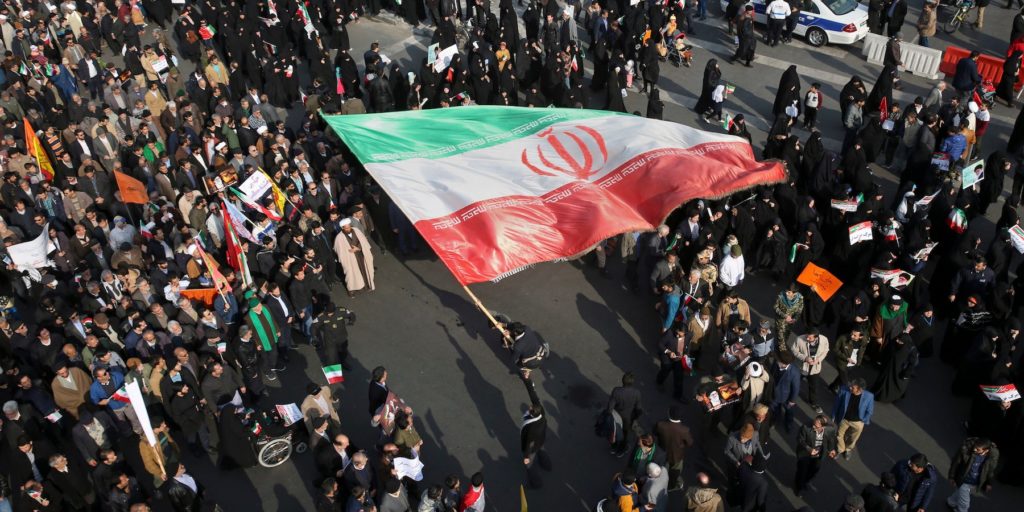 A pro-government rally in the northeastern city of Mashhad, Iran. Nima Najafzadeh/Tasnim News Agency via AP

One of the rights which the American public cherishes is the right to peacefully demonstrate against the government.  The right of peaceable assembly stands clearly in the First Amendment, taken from the constitutions of the newly-formed states which themselves took it from the English Bill of Rights of 1689, a component of the Glorious Revolution which ensured Parliamentary supremacy against the arbitrary behavior of the English monarch.

Beginning last week, tens of thousands of Iranian citizens took to the streets of several major cities to largely protest their government’s policies on employment and the prices of foodstuffs; it is increasingly being alleged that these movements were spurred and directed by the Sepah (Revolutionary Guard Corps of Iran) and other Principalist elements who seek to discredit Rouhani’s government.  Nevertheless, some of these gatherings became marred by calls for the ending of the present form of government, and for either the return of the shah or of a secularist or even Communist state.  Combined with calls against the government were not a few acts of violence against public property and policemen, and several deaths resulted from this.  The Iranian Government responded severely to these latter demonstrations, with hundreds of arrests, while many more tens of thousands of Iranians devised counter-demonstrations in support of the government, making the important distinction between opposition to government policy and the form of government itself.

None of this made its way into the minds of the American Administration, symbolized by its call for a meeting of the UN Security Council.  Neither has the American press taken notice of this.  The remarks of Ambassador Nikki Haley exhibited this ignorance in making an outrageous statement of support for the protesters who were themselves breaking the laws of their own country.  In words noted for their ambiguity – but not for their cleverness – she was publicly urging the overthrown of the Iranian Government.  The ambassadors of China, Russia and France all rejected the relevance of these happenings to the business of the Security Council, noting that the sphere of the UN concerns international relations, not the internal affairs of any of its member countries.  Thus, the US Ambassador embarrassingly had the founding principles of the UN flung back in her face, and was made to appear as a devotee of an unrealistic, illogical and unlawful emotionalism in favor of the much-misunderstood right of self-determination.  However, she was merely echoing the thoughts of her superior, President Trump.

Two days ago, the Sepah – regardless of its possible actions in fomenting the initial protests – announced victory over the violent protesters.  Within the UN this was a cause for rejoicing in that a country had been returned to internal stability, despite the problems which continue, and respect for the rule of law had come back.  To the US, however, the use of public force to end an organized movement publicly desiring the overthrow of the government and using weapons against the police to get such a move started was morally reprehensible.

Why does the US insist on this busy-body behavior?  Is it because we consider ourselves the nation chosen by God to convert the whole world to liberal democracy?  Or do we involve ourselves only in areas vital to our very broadly defined national interests?  In the Middle East, this would be the maintenance of friendly Arab regimes who provide us with oil and natural gas, and a continual alliance against Iran to prevent a security challenge to Israel.  What the security – or even the existence – of Israel has to do with American security does not appear anywhere save in the minds of the Zionist/Christian Fundamentalist lobby in the United States which, albeit for different reasons, sees the continued existence of that state in its present form as a sine qua non for a harmonious world order.

This ultimately leads back to the issue of the 1967 borders between Palestine and Israel and both Israel’s continued refusal to withdraw from the West Bank and its obnoxious settlement policy – especially in East Jerusalem/al-Quds.  The Likudniks and their Christian Fundamentalist allies can reasonably argue that the Iranians want the complete annihilation of Israel as a country, but as we see that the phrase ‘Death to America’ almost always appears in conjunction with the more famous ‘Death to Israel’, and that the Iranians can’t possibly wish death to a country the size of the US – and further that Iranian public officials have constantly proclaimed that these statements have to do with Israeli and American policies – the Israelis should not be worried about their existence as a country – especially since they possess a nuclear deterrent.

By saying these words, Ambassador Haley exposed the charade of American neutrality in the political game of the region.  The American Government wishes to see a change of regime in Iran not for the benefit of the Iranian people, but solely so that it will not pose a threat to the Zionist State.  All this talk of the ‘Great Iranian People’ is that much more of a joke seen in light of this position.

They want to over throw the govt mainly because the biggest hurdle to the Syrian War is Iran besides Russia.

Check this out as well – https://missiongalacticfreedom.wordpress.com/2017/07/07/there-are-only-3-countries-in-the-world-without-a-rothschild-owned-central-bank/

Joe, this may be the immediate reason, but the long-term is Israel.

In the article, it says there were “tens of thousands” protesters against the government and equal number of pro-Iran and pro-government rallies. I think that’s not the case with any stretch of imagination. If you look at the videos it’s clear which group had the larger numbers. More so, the measures security forces took is not comparable to the measures they took in 2009 or German, French or US police against their own protesters. We hear a lot about detention of “peaceful protesters” too. Majority of detainees were released but you won’t hear it.

According to reports, a total of about 3,700 people detained (including 68 university students, 17 of them females, which 68 is a surprisingly low number). We still don’t have a complete report on how many of them are still in detention and how many released. Most of detainees were identified through traffic, security, public and private cams like ATMs, banks, firestations and so on.

On a side note, a somewhat good news: The culprits that murdered a father and son in the city of Dorood (by releasing a fire engine) are identified and 2 of them arrested. The ones who are still in detention are likewise, meaning the ones participated in fires, attacks and other acts.

Did they release their info ? In particular the agitator ?

Garga
Reply to  as

No. They just said what I wrote but added they’ll release the details after arresting all of them. The arrest of the 2 happened in rural Tehran.

Garga, greetings. My apologies for giving the impression that I believe the anti- and pro- groups had equal amounts of people. The pro-govt. rallies had far more.

I agree also that the government’s response was clearly less than in 2009. I think this time around it was a small number of agent provocateurs who hijacked the demonstrations in some cities and turned them into anti-Republic shouting matches.

Thanks for your comments and for reading!

Thank you Dennis for following up the responses to your article. May I ask, do you speak/read Persian? Because if you don’t, you’re deprived from one side of argument and such impressions or mistakes will be inevitable.

Garga, I understand a bit of Persian, and can thus follow what is happening from Fars and other news outlets. Further, the English-speaking commentators who inform me (Mohammad Marandi, e.g., from Tehran University) – mostly from RT, The Real News and Al-Jazeera – do not approach Iran from the Western mindset, thus freeing them from ideological comments.

The article- by design- is part of the ongoing zionist press psy-op to imply there is a real problem in Iran, and a viable opposition movement that would support Trump’s military actions against the regime.

Southfront’s current editorial position is wholly zionist. This is a recent change, and was simply obtained by having HASABRA agents infiltrate this site in the guise of ‘volunteers’.

Genuine anti-zionist sites focus on acts of jewish atrocity in Palestine, so by doing so they really hurt the demonic warmongering cause of the zionists. A LITMUS TEST is AHED TAMIMI. Organised jewish movements are currently workling to ensure that young girl is a NON-PERSON. And she is most certainly a non-person on this site.

The article- by design- is part of the ongoing zionist press psy-op..

And those two statements are very true..! I thanked you for that..! As I always thought that I’m alone about it..!

This article is pure zionist dribble- designed to reinforce the idea of something inherently wrong in the state of Iran.

Let me ask you all a question. How many citizens (of each relevant country) hate Merkel, May, Marcon or Trump? Getting on for 50% of each nation. That’s modern western ‘democracy’- a 50-50 (artificial) war between two viable political parties and movements.

Yet this article would have you belive that a less than ONE PERCENT public ‘protest’ in Iran was of any significance whatsoever. Forget what the yanks said about it. By simple NUMBERS, there was ZERO significance to the protest, even forgeting the fact that they were instigated by agents of the West.

Meanwhile Southfront, BY POLICY will not cover the protests in Palestine against acts of jewish atrocity. You see, PUBLICITY matters, for inthe language of psy-ops, it is the PUBLICITY that is the thing.

Southfront’s article, by design, reinforces the idea there is a viable ‘opposition’ movement in Iran that would support an America invasion of Iran. Oh, for sure, the article is ‘cleverly’ couched in a language that makes the hard-of-thinking here think it speaks to our side. But it uses the WHEN DID YOU STOP BEATING YOUR WIFE? method.

All FAKE NEWS journalism that focuses on Iran and makes you think there is a ‘PROBLEM’ there (as this article most certainly did) is designed to sell the coming war on Iran.

Meanwhile Israel has its most extreme government in its history, with leading jewish politicians now feeling free to tell the truth about their demonic nature- but none of this gets covered here. Oh-no, Southfront would consider such FACTS “antisemetic”. Many jews in Israel, while proud zionist racists, actually are very troubled about how the worst corrupt low quality jewish scum has risen to the highest positions of power in that terrorist state – yet you’d never guess this from anything reported here.

An Article titled THE JEWISH STATE OF ISRAEL AND THE RIGHT TO PROTEST with special focus on the treatment by jewish neo-nazis of Ahed Tamimi will NEVER appear on Southfront- and that should bother every visitor here.

The tribe owns all media here in EU. Many Europeans are not interested or are too lazy to think. In my opinion good 50% reject those media and their (((joooo))) masters.