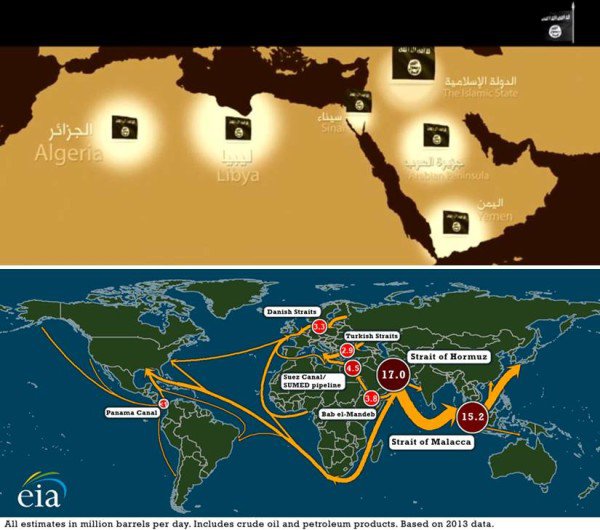 The maps depict a) areas that ISIS claims to seize, b) major hubs and routes for the global oil trade. (Image: Screenshot and EIA)

In a video that was released by the so-called Islamic State they presented their strategic objective on a map. According to it the Islamist mercenaries want to control the main oil trade route to Europe. If successful, the safe transport of oil by sea to Europe would be at risk. As a substitute the US could jump to help: They have started with the supply of liquefied gas to Europe.

In a recent propaganda video from ISIS’s anniversary “Two Years Since the Caliphate” the terrorist militia lays claim to six geographic areas: on part of central Syria and eastern Syria, the Arabian Peninsula, Yemen, Sinai, Libya and Algeria. In all these areas the terrorist militia will be even more active in the future, which will inevitably lead to a destabilization of these regions. Who is exactly behind the IS is not known. A striking feature of the jubilee video is that the alleged leader of the movement, Abu Bakr al-Baghdadi, does not play a role. One would have actually expected a message from the supposed caliph.

Particularly interesting is that these regions are located at the junctions of the world’s most important shipping lane, which in turn is essential for the global oil transfer. The oil trade from the east to the west is implemented through this waterway. According to the US Energy Information Administration, 63 percent of the world’s oil is processed via waterways. Destabilization of the chosen ISIS target regions would inevitably impede severely global oil trade. The most important junction for the global oil transfer is the Strait of Hormuz. The terrorist militia wants to destabilize the area of ​​this waterway as well.

Furthermore, it is striking that ISIS is not targeting all of Egypt, but mainly the Sinai and thus the Suez Canal. Egypt is not important as an oil exporter but the Suez Canal is, according to the chief economist at BHF Bank, Uwe Angenendt, one of the seven major transportation routes of oil. “Because of the Suez Canal and a parallel running pipeline, two million barrels of crude oil are daily transported from the Red Sea to the Mediterranean,” the German radio station Deutschlandfunk is citing Carsten Fritsch, commodity specialist at the Commerzbank. In this context, the commodity markets would also be influenced by developments in the neighboring countries of Egypt, which Libya is one of. Algeria, also the target of attacks by ISIS, lies as well on the world’s most important waterway and is also an oil producer.

Overall, this waterway with its junctions is especially important to supply Europe with oil. Should the oil trade by ship from East to West be stalled, the EU countries would rely on importing US oil and gas from the west to the east. In May the US has for the first time gas delivered to Europe. The transportation was by sea. In February, the European Commission ruled that American gas might be freely imported into the EU. This week the German parliament has granted approval for fracking in Germany.

Such a development would probably enable Russia to remain the number one as an energy supplier for Europe. The Russian natural gas now accounts for the lion’s share of the energy supply in Europe.

NATO will decide at their summit in July to extend the operation in the Mediterranean. The official reason given will be for the refugee crisis and, more recently, also the smuggling of arms. The IS apparently constantly transports weapons across the Mediterranean – probably to establish the geographic connection between the fighting groups. However the arms shipments go in both directions: In Syria US weapons have emerged, which had been brought by the CIA to Libya to equip mercenary troops.

The video of the IS is also indirectly referring to the Syria war: It is entitled: “Two Years Since the Caliphate – Wilāyat Halab”. Wilāyat Halab means “Aleppo province”. The Ottomans had Syria divided into two provinces. One province was called “Damascus” and the other “Aleppo”. The Aleppo province reached all the way into the present Turkish cities Urfa and Maras. In the province of Aleppo currently rages the decisive battle in the Syrian War: Russia and the Syrian army are fighting against Islamist mercenaries. Overall, the fight in Syria is about ethnical cleaning the regions to make way for pipelines. The expulsion of millions of people is the result. It leads to the massive movement of refugees to Europe. In the political debate about the causes of flight this crucial aspect is hardly considered.

Stratfor, George Friedman, Robert Kagan and other US geopolitics pointed out regularly how wisely the Ottomans ruled the Middle East and how the regions have been divided along religious viewpoints and tribes. From the assessment of the Ottomans by the geo-politicians an indication can be seen how a possible splitting of existing states in the Middle East by secessions, could lead to a re-order of the region.

“Should the oil trade by ship from East to West be stalled, the EU countries would rely on importing US oil and gas…Such a development would probably enable Russia to remain the number one as an energy supplier for Europe.” – How is any of this logical?

IF i was selling pot the American government would find me and kill or stop me even to go as far to kill my whole family and burn down my house , but they can’t find ISIS ,

It’s the USA that wants to control energy flows to Europe.