On December 26, The Times posted an article titled “Putin is our enemy too, says Chechen fighter in Ukraine”. It provides a look at “activists” that voluntarily assist efforts of the Ukrainian Armed Forces (UAF) in their conflcit with local resistance in the region of Donbass.

These activists, some trained in ISIS camps, formed  the Sheikh Mansur battalion and actively operate along with UAF units in the combat zone. 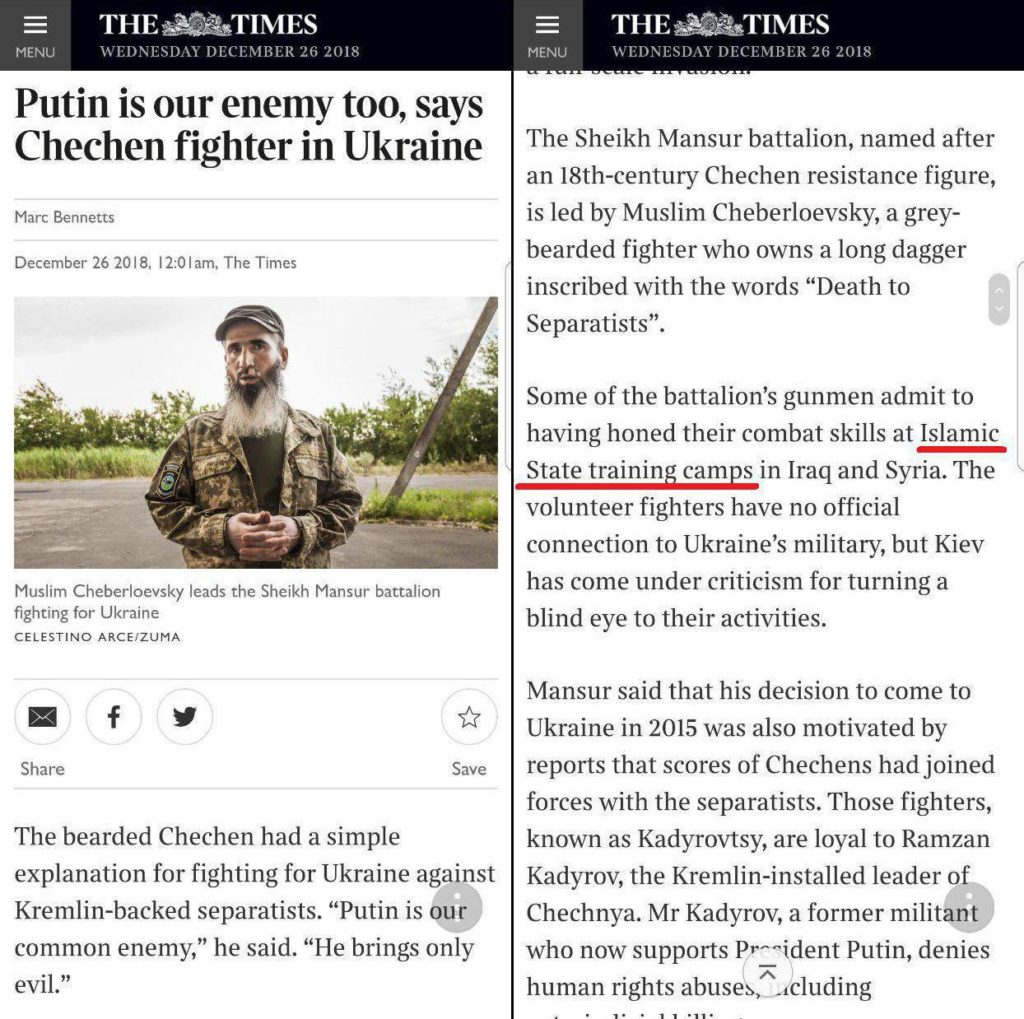 The most interesting thing that the Times’ article attempts to provide a “neutral” or even “positive” look at the terrorist group’s operations by criticizing alleged human rights violations in Russia’s Chechnya and prising militancy in the Russian region.

This is not the first time when it publicly appears that most of pro-Kiev forces in Donbass are terrorists, Nazis, war criminals or else. However, this does not stop the so-called “civilized world” from supporting actions of the Kiev regime.

Good news , Russians waiting for them !

AM Hants
Reply to  stary ujo

So too is Bastion, together with the hypersonics.

People like them are teachers mainly deep behind the frontline and too expensive to loose. They did well in Bosnia creating the first Bosnian army.

I dont espect Ukrainians being muslims in a Saudi Arabia model.

This explains where some of the planeloads of Terrorists disappeared to from Syria ……. specifically, the re-education & retraining occurring close by al-Tanf Air-Base. All cleaned up, sans beardies and on their way to conflict-line with Donbas or, for those ISIS of a Muslim persuasion, off to join the Tatar ‘freedom fighters’ of Crimea.

No, its not. Your masters systematicly has lied for You again and again about them as well as own losses. Thats were You find THOUSENDS of SOLDIERS against You.

Many, many of those are constructed artificials. But You eat it as goats and swine.

Not surprising, when those who fund The White Helmets, are also behind events in Ukraine, plus, no doubt the Chechnyan War, plus, Georgia invading South Ossetia and taking out the Russian peace keepers. In fact, the charities and Governments funding the White Helmets, were also heavily involved in invading Kosovo. Same faces, same characters, same script. Bell Pottinger, the PR management company, spun the wars, now they use ‘The Integrity Initiative NGO’, using the same script.

Interesting, piece from the rticle:

‘…And why did I highlight Baroness Helena Kennedy QC? Here are some notable details: 1. She used to chair the Human Genetics Commission 2. Presenter, Raw Deal on Medical Negligence, BBC TV, 1989. 3. Chair, Reading Borough Council’s Commission of Inquiry into the health, environmental and safety aspects of the Atomic Weapons Establishment at Aldermaston (final report Secrecy versus Safety, published in 1994). 4. During the 1970s, she was a member of the Communist Party of Great Britain. (Wasn’t Julia Middleton as well or was it her father?)…’

Weird, why were Bell Pottinger involved in Maddy McCann? Weren’t they also involved with the Podesta Brothers, who happened to be in Portugal, during the same period?

THE PODESTA BROTHERS REVEALED TO BE IN PORTUGAL THE DAY OF MADELEINE MCCANN’S DISAPPEARANCE…http://www.thelastamericanvagabond.com/top-news/podesta-brothers-revealed/

‘…A minister for the UK FCO has officially confirmed that it has been funding the Integrity Network.

In addition to conducting diplomacy, the FCO oversees both the Government Communications Headquarters (GCHQ) the UK equivalent to the National Security Agency, and the Secret Intelligence Services (SIS) commonly known as MI6…’

Funny how the same crowd are behind the White Helmets, together with events in Ukraine.

VeeNarian (Yerevan)
Reply to  AM Hants

This is why JC will not last a week if he is ever elected with a majority to be PM. I expect his own MPs will move to get rid of him together with help from the dirty tricks department of MI5/MI6/II. The only question will be whether this will be before or after the 17 million Brexit voters are betrayed with a second referendum of the “people” (the last one was obviously full of “donkey voters” and funded and fronted by “Russian agents” like Boris (secret Russian) and Iain Drunken (with Russian vodka) Smith.

Just wish for a thorough clean up of Westminster, starting with vermin control, being called in. Then for the clean out of easy to blackmail, owing to lifestyle choices, or coerce politicians and the lobbyists.

France got it right, back in the 18th century.

JC has held on thus far and there have been some vicious attacks against him, in a similar vein to that leveled at a previous PM. The people need to support him more and directly call out the media when they spout claptrap. JC is a decent man and has a scientist brother who is well clued up on climate.

I too see future elections becoming dirty and fraudulent.

Its not about betrayed or not. There are several versions of out. Those added are the majority for out.

Sometimes You have to take, what enough say. Behaving like so many of Your politicians has, You cant expect we are being nice.

As a private person i Denmark, I would have liked, You would still be in EU and make some needed reforms for all come through. I agree in many of the reasons for Your opposition to EU.

VeeNarian (Yerevan)
Reply to  AM Hants

Merry Christmas and a Happy New Year 2019. But I fear a Brexit betrayal in the pipeline by the UK elite in parliament. Time for the men and women of Essex, Kent, and all the free shires to march on Parliament and teach them about the concept of the sovereignty of the people. Just like the good old times! Get your yellow jackets ready!!!

Merry Christmas and a Happy New Year 2019, to you Yerevan. Just hoping for a hard BREXIT, despite May believing the Government will support her. If they do, well, we all know, they care nought about the electorate. Without politicians getting involved, we would be out by now.

Brexit won’t happen unless we the British people elect a new leader who isn’t hard of hearing and has some common sense. May might hold on but it doesn’t look good. There have been a few former PM’s who have brought this process on themselves. It didn’t work out for them either. Realistically, she only has half the support she once had. Prime minister May says she will step down before the next election. Get ready for another handover of the post elected by tory party members only.

If a PM steps down, that should automatically trigger an election in my view. I feel that the next election is going to be a dirty affair with lots of slanderous nato neocons scurrying from the woodwork.

Which election do You refer to. Out is decided by election.

No, Ypu wouæd not be out now.

There were some reports of a yellow jacket protests going on on christmas day, in Somerset if memory serves. We will probably meet one day when the march on parliament takes place. You will know me, i’ll be wearing a yellow vest.

So What is a song recorded by American singer P!nk for her fifth studio album, Funhouse (2008).

They bought a teacher for skills.

ISIS trained Chechen Islamists “famous” for severing off heads of every Christian they could get their hands on in Syria and other places they fought came to Ukraine to “help” supposed ultra-Christian Ukrainian nationalists fight “evil Putin” – common enemy to bearded head-choppers, Zio-Neocons and UkroNazis. If I were Ukrainian i’d print this sentence in very large font, read it a couple hundred times and then get myself busy changing present insane regime in Kiev. Or convert to Islam…

Umm! Islamic Republic (ISIS) of Banderised Ukraine! Watch out for burkazoids in Kiev! What a horror movie Ukraine has become!

Just because You have internet and eat with chopstickers, doesnt made You into member of CIA in Japan.

He posts like a 13yr old basement dweller with a chip on his shoulder.

At the 2 tjetjenian wars ISIS did not exist. Assad made them as ISIL.

ISIL didn’t but Al Qaida and CIA did. US made ISIL or Al Qaida in Iraq as it was known originaly. And Al Qaida didn’t exist in Iraq before illegal US war of 2003.And at that time Bashar was hailed as modern Arab reformer by western media. Pls cut the BS Neocon hasbara we are all adults here…

ISIS has many terrorattacs inside Russia already.

Including in your head.

Wasn’t this shower of shit responsible for Beslan?

All military threats to Russia are planned by nato, the US, and probably very soon, isreal. These fake freedom fighters best be careful. President Putin once turned over his vodka glass to rid Chechnya of its vermin. He can do it again, this time much more easily.

I do hope that western media outlets such as the Times, bbc, and too many to mention, change their tune on producing propaganda. The latest yellow vest protests are as much against the fake media too and could develop wider than anyone imagined.

People concluding like that are mad. Its clear that the ukrainiean partly private milisias has no expertice apart from the bealdered Russian one.

therefore they buy it. And where. Well Qaodas did fight well against Russia in Tjetjenia and some went to ISIS, which dont like Russia as well.

Nothing strange in that, more like no flexibility in the thinkingmachine referred by the journalist Marc Bennets.

Do you have your own opinion, or no?