Terrorists of the Islamic State group attempt to blend with civilians, fleeing from Mosul city. 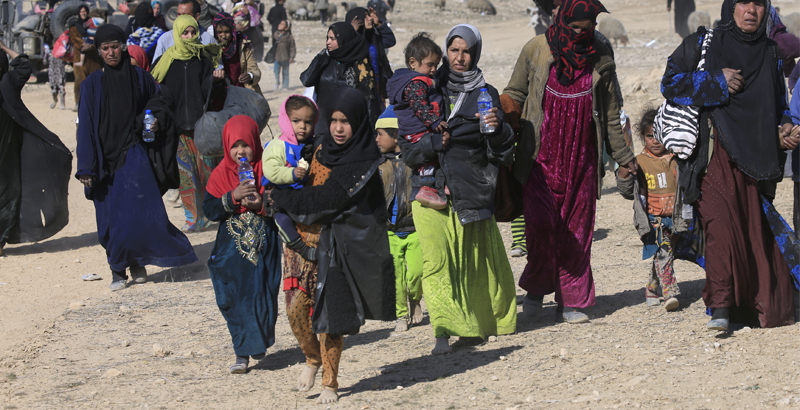 The Iraqi security forces have tightened a check of refugees, fleeing from Mosul, in order to prevent terrorists of the Islamic State (IS) group from escaping. As a result, a surge of civilian deaths and displacement erupted in the area, the UN reported.

According to the UN Office for the Coordination of Humanitarian Affairs (OCHA), only over the past two days, about 12,700 people fled from the western part of Mosul due to intensified fighting. Reportedly, the humanitarian situation worsens, as the fighting approaches to populated areas of the city.

“So far today [on Tuesday], we have around 300 displaced people – men and women and children,” Iraqi Brigadier General Salman Hashem told AFP, speaking only about one checkpoint.

Though humanitarian organizations have enough place to place refugees, the housing process goes pretty slowly, as the Iraqi Security Forces thoroughly check arriving civilians, especially men, as they expect IS terrorists to try and mix with the refugees to leave Mosul, Reuters reported, citing an unnamed Iraqi intelligence officer. The officer noted that the Security Forces use databases of known IS members, local informants, and their own professional flair. In the first place, Iraqi servicemen expect to see non-combatants IS members and those, who did not hold any public positions.

“We have a mechanism. We have names and sources but even so, we don’t know all of them. But there are people who cooperate; most of them are cooperative,” the intelligence officer said. “You can tell because [fleeing IS members] are afraid. Those who are not Daesh [IS] are also afraid but it’s different from the fear of those who are with Daesh.”

“There are more coming. They’re stopped at a checkpoint when they arrive and separated. The men are searched and then checked against a database,” Iraqi Brigadier General Salman Hashem noted.

Meanwhile, the OCHA noted that about 16,500 people from Mosul have been displaced, while only 8,800 of them have been distributed among camps and emergency sites. Many escaped civilians have to sleep in the desert and reach emergency sites, being “exhausted and dehydrated.”

“They’re coming to us after days without food,” the Brigadier General said.

According to reports, civilians, fleeing from Mosul, also become twin targets, being struck by airstrikes of the US-led coalition and terrorists, who deliberately shell and snipe them.

“We were hungry all the time… Our families and children were starving as well we could not get out because of the airstrikes and the mortar attacks,” RT quoted a displaced man from Mosul.

In addition, there are a serious shortage of basic supplies and soaring food prices in the besieged neighborhoods of the city. According to residents from some parts of Mosul, sometimes, even if you have cash, you cannot buy anything. Some refugees said that they had to leave bodies of their relatives, who had died from hunger at their homes.

“There was nothing to buy. You have money but what can you do, eat money?” an elderly man, escaped from western Mosul, told the Reuters news agency.

According to estimates of Iraqi military at the start of operations, there could be 6,000 IS terrorists inside Mosul. Commanders of the Iraqi Army claim that about 3,300 of them have been killed during the battles for outskirts of the city and the eastern part of Mosul.