On August 15, a unit of Liwa al-Quds, a pro-government Palestinian group, fell into an ambush set by ISIS terrorists in the western countryside of Deir Ezzor.

The incident reportedly took place in the area of al-Khur, in the outskirts of the city of al-Mayadin, in the early morning hours.

According to the London-based Syrian Observatory for Human Rights, three fighters of Liwa al-Quds were killed in the ambush. Six other fighters were injured. 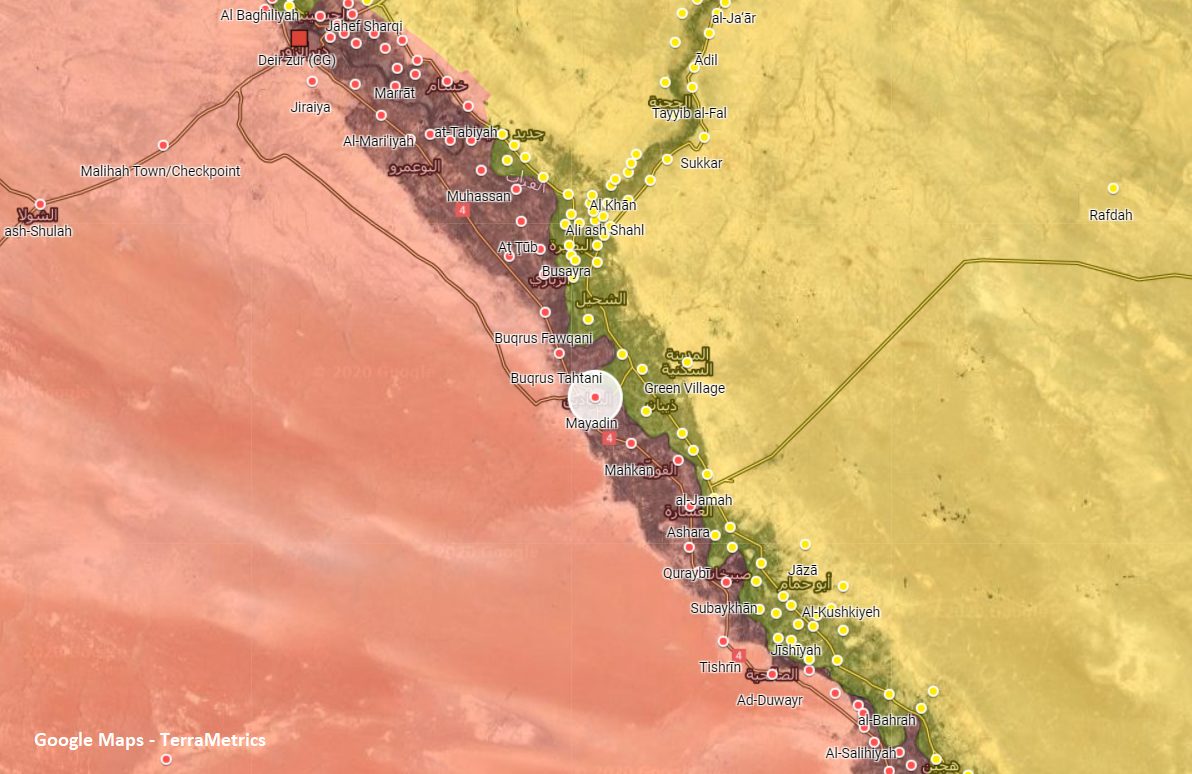 This was the second such ambush this week. On August 11, ISIS ambushed units of Liwa al-Quds and the Syrian Arab Army 4th Division near the town of al-Tabni in the southern countryside of Deir Ezzor. Government forces sustained some material losses. A service member was also killed.

ISIS cells are likely launching these attacks from the Homs desert, which lays between western Deir Ezzor and eastern Homs.

In the last few months, government forces attempted to contain the terrorists within the Homs desert by carrying out a series of operations in eastern Homs, eastern Hama, southern Raqqa and western Deir Ezzor. These operations had limited success.

Government forces need to adopt a new, more active approach against ISIS terrorists in the Homs desert, which have become a serious threat.

As usual, these things never happen in US/Kurd invader-occupied parts of Syria. The Zioterrorist and wahhabi motherfuckers keep running rampant in the desert and with covert US weapons and tactical support from al-Tanf and the SDF invader zone that won’t change anytime soon.

Actually they do increasingly happen in SDF territory. The sunni Arab tribes who in the majority before were loyal supporters of ISIS, and then switched over to US+SDF after ISIS caliphate died, are becoming increasinly angered by Kurdish reign. Not sharing power, religous sunnis vs. PKK secular ideology, Kurds ruling Sunni Arab areas, forced conscription and corruption (something Assad is always blamed for by MSM) have made them increasinly resisting. Still most tribe leaders prefer this status quo to Assads gov rule, but the tides are shifting. ISIS is increasingly getting support from these tribes again and SDF support is eroding. Most seem to be disillusioned by the reality of ISIS utopic promises, after having embraced them years ago, but sunni ultra conservatism still has a huge attraction for many of those ultra conservative sunni tribe leaders and elders. ISIS still seems to see Assad as the bigger enemy. US occupation weakes Assad, which helps ISIS. And in the desert Deir Ezzor and Al Tanf ISIS can hide easily for years, it was easy for them to hit and run Assads gov troops.

But now ISIS in Iraq is surging, and the whole deasert region between US/SDF controlled north east Syria and North West Iraq is the hotbed for ISIS activity, so naturally there is more oppourtunity for ISIS and SDF to have contact. Seems the tides are already shifting in 2020.

And how many Deash fighters were killed? Oh yeah, none as always. They ‘managed to escape into the desert’ again completely unscathed. I forgot they are completely invincible!

First amaq now coventry, the best of disinformation, nothing these falsifiers publish is to be believed.

I don’t think these are lies. Yesterday Almasdar reported that several Arab tribes affiliated to the NDF and SAA had agreed to attack Kurd/US terrorists and invaders in eastern Syria. In such circumstances it’s only natural that US/ISIS would increase their cover ops against govt. forces.

Well they need to get on with it and start attacking.

Those Apes are operating from a base,don’t tell me they exist in the desert,any force needs logistics to survive,locate that base and incinerate it.

Their base is possibly on the other shore of the river

Again, Assad shows his incompetence! Absolute ridicule. He had 4-5 months of relative calm in Idlib, time of which he could’ve launched a massive security operation in the Deir ezzor desert to eradicate ISIS once and for all but no, he sat down and did nothing. Idiotic. Russia is dormant as always, only looking towards Idlib, meanwhile, Syrian forces suffer more casualties from hit and run attacks in Deir Ezzor than they did in Idlib when they launched their operation in 2019.

Assad is sadly totally dependent on Russian and Iran support. Russia holds the real descision power for any descision of major operations.

Yes, Assad could against the will of Russia start a Idlib campaign, but this would (even more) strain Russian support and its relation to Assad.

Assad has already shifting to more Iran support to lessen this depence on Russia, but Iran can not replace Russia in a total or major way. Sadly it is like it is. Assad would have cleaned out Idlib since 2 years ago, had it been up to him and the SAA. But Russia and Putin personally has asumend the role of self declared string puller of the middle east. He believed to be able to work with Erdogan, that he would pull ot of Syria, end all Turkish support for Jihadis, and make peace accords and restart good relations between Assad and Erdogan. That is what Putin believed over 2 years ago, he could accomplish over the course of some months, at least not over 2 years as it stands now, without even a remote chance that Putins plan would be realistic even in the middle term. Assad never was naive in this regard, and had already learned himself not to trust Turkish and gulf influence. Before the war, the opend his economy and society to Turkish and gulf investors and religous influence. The economy broke from this, and the sunnis religous extremism exploded, after it had been broken with 1000s of dead soldiers defending their state against their extremist vionlence decades ago. Assad made that error, but he is no man to make them twice. But he could not snub Putin, who on the world stage tried to be the man that is the king of diplomatic string pulling in the middle east. This would have been a stab in the back disastrous for both Putin and Assad. Sadly it is what it is. Had Putins plan worked out, it would have been a master piece. Sadly this plan would have never worked, because it relied on a picture of Erdogan that was naive. Now 2 years after the first Idlib deals, Neo Ottomanism is surging in over a half dozen different countries, Syria was the seed that started it. Erdogan exploited this naivitee, and build its new empire from it. And has learned, that as long as he is even more bold, brutal and cunning as his opponent politician and countries, he will get everything he wants. Russia had understood this at the start of the year by all accounts, which led to the campaign to take M5 at the start of 2020. But when the Russians killed the 30+ Turks in one airstrike, Putin pulled the plug in fear of Russia-NATO war. Understandibly. Now it seems to late. Turks are entrenched in Idlib, have total control, and better and shorter supply lines as even Assad through their southern provices. Drones and EW of Turks have showed what they can. Without Russia again directly targeting Turkish troops, Turkey has the better odds against SAA. The last campaign and its climax decisive battle in Saraqip has only been won because of the heroic Hezbollah special forces in Saraqip. I fear, this is what it is now…

Actually something was done. There was quite a big operation months ago. But unless the US and the SDF are removed from northeast ISIS will keep flooding the desert

The invincible ISIS is at it again. They must be superhuman.