ISIS terrorists have launched another attack on the Syrian Arab Army (SAA) and the National Defense Forces (NDF) in the eastern Homs countryside.

Before withdrawing, ISIS terrorists set the three bases on fire. The terrorists also blew up a gas line that passes through the area. 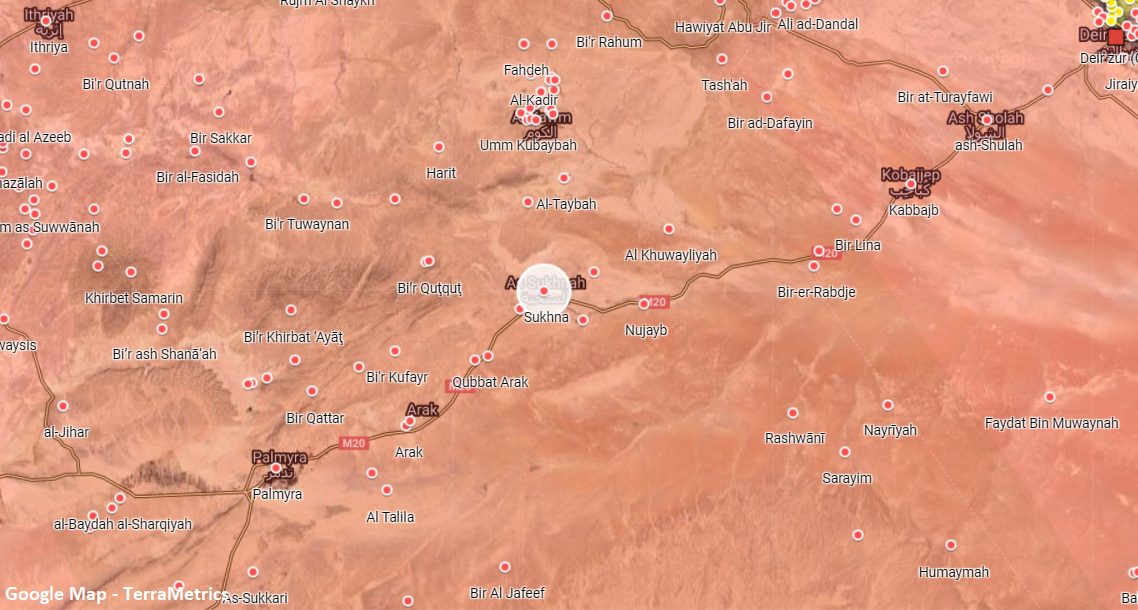 ISIS terrorists launched the attack from their stronghold in the central region, the Homs desert. The vast desert lays between eastern Homs and western Deir Ezzor.

The SAA and its allies usually respond to such attacks by launching combing operations around the Homs desert to drain ISIS terrorists. However, this tactic has proven to be infective. Recent reports revealed that the terrorists are receiving support from U.S.-backed fighters based in the nearby area of al-Tanf.

That would be nice and should have been done years ago but with the US forces in Jordan and Iraq and the aircraft carrier group the response will be more than Syria can handle.

I doubt they would,their bluff needs calling,another tactic Russia and Syria could use would be to use local fighters to attack those bases,ater all thats what theU S has done or a long time,used proxy fighters

Time to us WOMD and Napalm against cockroaches.

RIP Heroes. You will be avanged soon.

Thats not good enough Ranger,its that fucking desert again,why didn’t they call in air strikes as soon as the attack started? also i don’t get this desert bullshit,they can’t be hard to locate with the technology they have,and they must have supply lines, a fighting force can’t exist in the middle of a desert long without support,i think that support is from the US,until that situation is dealt with there will be more of it.

To be honest I dont buy that hiding in the desert story either. In my opinion these are hit and runk black ops operations by the CIA and Mossad and they probably use terrain hugging stealth helos. They drop, deploy, attack than head for the extraction point. One helo with 8 men crashed over the Shinai peninsula… Coincidence? Could be… Or not…

You could have a point,i don’t believe those Apes have the skill to carry out all these attacks,could be special forces,whatever it is they need dealing with.

Of course they do, why do you think they never show their faces? Under the masks they’re all zio and Amerikastani military on deputation. Only the cannon fodder get killed, the real fighters never do.

Unfortunately when a helicopter crosses the Euphrates S-x00 can’t see because they are turned off.

I agree. These outposts seem to be left to defend themselves when support units could be on standby for response to any attack. Drones surely can cover massive areas and track down these groups. The LRDG and SAS in the desert in the 2ndWW were well versed in hiding from Germans but if they were ever spotted from the air they were cut to pieces. With no real fighting going on in Idlib at the moment surely they can use some of those resources to work out how ISIS operate and take care of them. There is no reason the Yanks in Al Tanf to be there and they can just as easily control that Baghdad – Damascus rd on the Jordanian side of the border. Of course that is just their excuse for being there so they control that refugee camp for conscripts and train terrorist groups without interference from the government. Biden is probably going to be worse so no relief there.

Well the SAS and LRDG from WW2 maybe old school,but i believe those tactics are still relevent today,the SAA and maybe Russian special forces could sweep areas of that desert using heavily armed all terrain vihicles backed up by drones and if need be aircraft the SAS destroyed many German aircraft on the ground in the desert,the Syrians need to use the tactics of their enemy.

Yes thats the source all of the madness happened recently in the eastern and south syria. So it will works wonderful if that shitty hole got blasted

And once again, no Deash militants were killed. Amazing.

Not really. Have you seen how ISIS attack these outposts. They arrive in several vehicles with heavy machine guns and large caliber weapons mounted on the back. From a distance of hundreds of meters they open up on one side of the outpost concentrating their fire. From the outpost the defenders can’t really see the attackers and just shooting wild and ineffective at that range. They are driven back under the incoming fire and groups of ISIS advance in their vehicles under cover fire of the others taking a position much closer within range of mostly RPD’s which most seem to have. The process is repeated until most are now under the bund / raised dirt wall , and all advance over the top together. Those defenders that could get in a vehicle are off down the road , the rest are either dead , incapacitated or hiding who are all found and killed. Any that are running from the outpost are chased down and killed. As the ISIS are generally battle hardened and experienced against the poorest trained and those not fit for frontline units they are no match for the attackers. Lots needs to be done to support and defend these outposts including having a dedicated helicopter fire force to respond immediately to any attack. ISIS would be sitting ducks in the open desert to choppers ..but … ??

I don’t really buy that,several Isis trucks racing over the desert towards the SAA base,don’t tell me they are not seen long before they get anywhere near the base,to storm a base they would need hundreds of fighters,and they can’t just appear from thin air,drones could be deployed and armed drones.i just don’t buy the whole hiding in the desert narrative.

I agree they SHOULD be spotted long before but I have seen several of their videos doing exactly that. One base was under attack for hours , started in the dark and the sun came up and was high in the sky before it was over , but no one came to the aid of the base. No air cover , no army. They were left to their own devices. It may have improved now but I agree that there is no way these groups should be able to operate so freely and the SAA must have the resources to deal with these groups.

If they attack SDF in 10 mins are hit by the US drones that are permanently in the sky. And chased to the last.

Well they need air backup 24/7 if they don’t have it thats a bloody outrage.

But they can’t be seen from the sky when go back to al Tanf.

Not so cool for the Syrian defenders who mostly end up dead .

RIP, unfortunately that’s how they took over also, Iraqi and Syrian soldiers are not top fighters.

The SAA and its allies usually respond to such attacks by launching combing operations around the Homs desert to drain ISIS terrorists. However, this tactic has proven to be infective.

Why? because the SAA are totally fucking useless or because what Daesh militants there are hiding in the desert magically vanish without a trace during the combing operation then re-appear once it’s over?!

They are probably heading back to Al Tanf after the attacks,thats the big 600lb Gorilla in the room.

Time ro keep an eye on Al Tanf too.

Because SAA is backed by Russia.

if this is true? let them kill each other wahhabi UAE/saud supported IS and iran supported alawites.

Once they enter in Al Tanf area under US control are safe!

Well, it wasn’t close to al Tanf. It was close to Russian base near Palmyra

But they cannot hide close to Russia base….but once enter in Al Tanf area SAA are not allowed to enter there…

Al Tanf is pretty far from there, hours to drive through desert. How can they escape in plain sight since Russia brought planes to bomb exactly that part of desert?

Since is plain, it should be easy hunt for Russian airplanes that were brought there especially for that mission. And jets are faster than cars even in the desert.

ISIS is pretty adept at hiding in underground bunkers. They’ve repeatedly used those to good effect. Hide by day, drive by night, fly Amerikastani flags, no problem at all.

There not being supported by the these in Al-tanf since that place at Al-tanf is inhospitable to move around.

ISIS Is a ghost army in Syria now. Hard to locate them or see them anywhere. Thats what they are currently the Ghosts of the desert regions

The dedert people from star wars

Well what are they sand beatles? hundreds of terrorists can’t live in that place without logitics,they need food water and weapons,i don’t believe they are living in the desert.

RIP HEROES AND DEFENDER. I SUSPECT YOU NEED MORE FORTIFICATION AND HEAVY ARTILLERY

They are only two ways they get there. Kurdih cowards let them, drive them across the river, and Al Tanf. Over in Daraa they come from Israel, it is Mossads covert op.

Or they are everywhere in Syria.

Biden will likely step back from supporting ISIS, I think that is inevitable if Trump quits graciously, which I hope he doesn’t but I think he will next month when the election is certified by the States where procedure is still in progress.

Furthermore we now know Abu Bakr al-Baghdadi was drugged by traitors and transported to Israel, my Companians in Paradise have lost contact with him, for all we know he could have converted to Judaism.

In many ways Bakr has the same resume as General Haftar these are real people trainer CIA Operatives, it’s easy to google both backgrounds, the difference between Baghdadi and Haftar is that Haftar continued in service and Baghdadi betrayed Obama and went as a freebooter breaking the back of al-Nusra allowing Russia to intervene while Obama was in a quandary.

anything reported by SOHR is CIA created

“Recent reports revealed that the terrorists are receiving support from U.S.-backed fighters based in the nearby area of al-Tanf.”

The only reports I’ve seen that say that are the ones I read on SF, and they say it every single time they mention Isis. How about coming up with a solution instead of attributing blame, if the base at Al Tanf was really being used as a logistic centre for Isis as SF claims it is, the Russians and Syrians would have a ring of steel all around that 55 km exclusion zone, nothing would get in and nothing would get out, because they’ve done it before. Russia already has an artillery base just outside the exclusion zone that covers 90% of the exclusion zone with it’s long range artillery, so only the absolute morons who read SF will believe Al Tanf is the reason Isis is still giving the SAA a thrashing, the real reason isn’t so simple and more complicated than SF want to admit it is, or maybe even understand it is.

The vast desert lays what? Eggs? That hatch into new deserts? No wonder desertification is advancing!