It’s clear that the authorities will try to hide the true motive of the shooting to prevent fallout during election campaign. 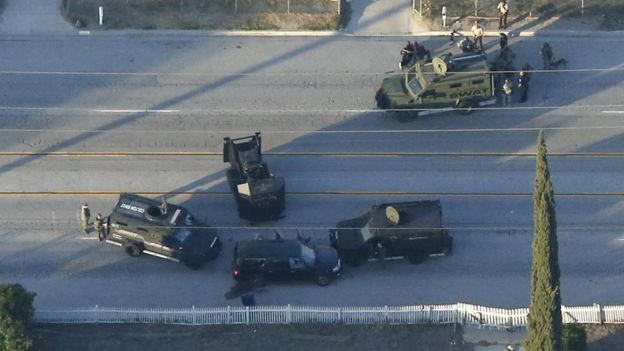 The US police is “trying to establish” why a man and woman opened fire at a social services centre in California. 14 people were killed and 17 more were wounded.

Then the pair were killed in an exchange of fire with police:

President Barack Obama said it was possible the latest incident was terror-related but the authorities “do not know at this stage”.

The FBI is investigating terrorism and a workplace grudge as possible motives.

Farook and Malik are thought to be a couple with a six-month-old baby before they opened fire with assault rifles and semi-automatic handguns at  at the Inland Regional Center in San Bernardino, where Farook worked.

There are no information on whether Farook or Malik had a criminal record.

Colleagues told the Los Angeles Times that Farook had travelled to Saudi Arabia and returned with a new wife. The couple had a young baby, they said.