Over 15 ISIS members were in clashes with the Syrian army east of the Kuweires Airbase in the province of Aleppo, according to local sources. ISIS terrorists were killed in the government advance in the villages of  Kiyariyah, Khassaf and Zubayda which resulted in the liberation of these areas.

Now, government troops are advancing against ISIS terrorists at Jinni al-Salamah and Umm al-Mara. Clashes are ongoing there.

Airstrikes were reported in the outskirts of the ISIS-held city of Deir Hafer. Looks like SAA had really good intel on where Daesh has a strong defence and where it’s weak. Being able to move really fast in the weak areas and slow but steady in the stronger parts. This army has changed for the better!

The next step should be the old Russian WW2 tactic… 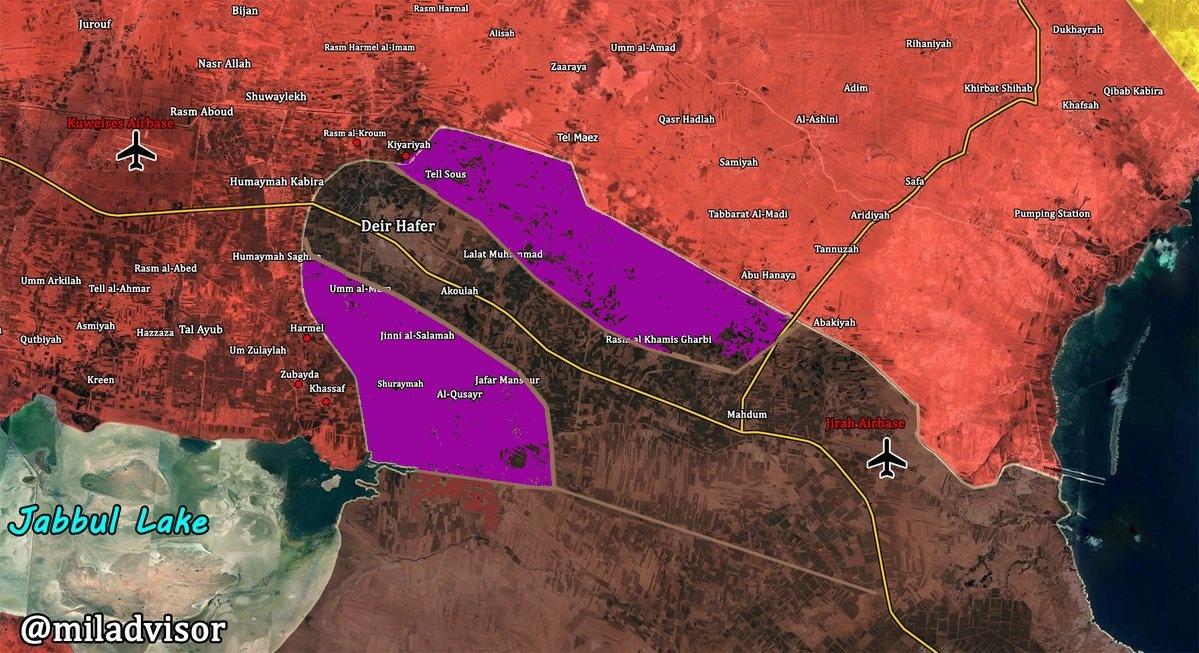 Do this and in a week Deir Hafer is free, no IS fighter stay in a Circle long , they have problem with manpower and they will escape to Raqqa

Encirclement has been used throughout the centuries by military leaders. Sun Tzu, in The Art of War (traditionally dated to the 6th century BC), speculated on the maneuver but advised against trying it for fear that an army would likely run first before the move could be completed. He argued that it was best to allow the enemy a path to escape (or at least the appearance of one), as the target army would fight with more ferocity when completely surrounded, but it would lose formation and be more vulnerable to destruction if shown an avenue of escape. (https://en.wikipedia.org/wiki/Pincer_movement#History)

That was the advice when a full army was cut off or surrounded, of course if you know you are going to die, you fight more recklessly and valiantly.
Deir Hafer is manned by straggling ISIS units, a few hundred, maybe a thousand, cut them off and put them out of their misery.

This is also a good advice… Full encircle and the other goes down to Maskaneh, later go to Al Tawrah and Raqqa. The towns can be bombed every day and every day one IS fighter less or two. At end they are Human also and few wll surrender.

There are so many occasions where the US has deliberately funnelled ISIS into Syria that it would be very rude for the SAA not to return the compliments and let ISIS flood into Raqqa for the US troops to play with.

Is that what Genghis khan did? In the beginning of red dawn the teacher was talking about?

But it looks like the Tiger heard us :D

The problems I foresee with the SAA advance towards east and
south east is that going deep into largely Sunni territories they would hardly
be welcomed by the civilian population. They might be able to kill a few jihadists
but many would go under and mingle with the civilian population at first, just
to commit then terror acts on the new administration later on. Let us not
forget this is largely a sectarian war and many if not most of the poorer Sunni
will resist the largely secular or Shia SAA army. I am a bit concerned ( given
SAA notorious lack of manpower) about their ability to hold on to the re
captured Sunni territories in the east. Incidentally ( or maybe not) the
Americans and Iraqis face the same dilemma in and around Mosul where they have brought in
additional troops to tackle the insurgency of the local Sunnis that they
expect to re-emerge as soon as the big
battle for Mosul is over ( remember Fallujah and Ramadi in 2004/2005); It is
well know the jihadist tactic to cut their beards, get rid of the military uniform
and then mingle with the civilian population. How SAA will resolve this dilemma is anyone’s
guess.

The civilian population apparently welcomed the SAA in every corner they got. ISIS-jihadist rule seems simply shit, and the jihadists will have hard time mingling with the population, not least because a significant number of them are foreigners. And just to illustrate that the sectarian aspect is part of the “divide and conquer” methodology, forced from the outside: the SAA’s sectarian background is the same as the overall sectarian distribution of Syria. In other words, the SAA is not largely Shia, but largely Sunni, at least for the background of the soldiers. The SAA, as an institution, is of course secular, and Syrians seem to take this seriously.

Fair enough. But how do you explain the bus loads of jihadist ( women and children included) that chose to move to Idlib rather than stay under secular administration that the SAA army brings with them? They clearly can’t stand Assad regime ( for whatever reason they may have). Yes , there are indeed thousands of foreign jihadist but there are enough radial Sunnis in Syria who with the support of the Gulf state want to carve an Islamic stated modeled after Saudi Arabia on the Syrian territory. One can not deny that. Most of these radial Sunnis leave in the south and east of the country. Time will tell, but I am skeptical that Assad can hold the ground for much longer unless he gets the support of a few more battalions of military police from Russia. If your contention would be true, I think the local population would have successfully revolved against he ISIS regime. They did not, which supports my theory that most of them ( not all ) are supportive of Islamic state and all the ” goodies “: that it comes with.
I hope you are right, but I am more skeptical by nature and doubt Assad’ s ability to reintegrate the radical Sunni in the civil populations after 3-4 years of Islamic propaganda. And one other thing… who do you think bombed the Justice ministry last Sunday ( in Damascus)? I tell you who it was. It was one of the filthy jihadist that was generously pardoned by Syrian government and allowed to reintegrate into the civil society. I am afraid there are many more of those Sunni jihadist that would chose death for Islam over a peaceful life a more secular Syria. Time will tell.

That leaves 9.5% under “rebels” and only 6.7% under Daesh.
The local population has no chance to revolve. Although, some unconfirmed attempts have been reported over the last year and a half or so.
Everyone who could, fled to SAA or Kurdish controlled area or abroad. Many of those who stayed couldn’t leave – health problems, familly reasons, other reasons and now are not allowed to leave anymore. Both, Daesh and “rebels” use civilians as human shields.
Then there are the others who joined Daesh or “rebels” because they didn’t have a choice, otherwise they would be killed and their families as well. Those are the people who surrender immediately, as soon as possible.

Obviously, you are right regarding the bombing. There will be more. Islamists are definitely a minor group in Syria, but they can still cause a lot of damage.

I remember a few batches of extremists and their families being bused to destinations inside Idlib Province. I think that stopped after the various extremist factions in Idlib began fighting each other again and considered the evacuated miscontents as reinforcements for their rivals. Believe that the last bus convoy going there was stopped right after crossing into Idlib where their passengers were forced to get out because al Nusra wouldn’t let them pass thru their territory. These groups have been kicking out smaller militias along with their families that refuse to join them and have to march, thru hostile territory without any escort, to some distant destination that was decided upon by their rivals so don’t have a clue on what to expect once they get there nor how they’ll get by. Perhaps those long walks are bringing many of them to Jesus where they’re reconsidering living under Assad’s governmental authority and joining the SAA may be the most practical thing to do to survive?
Stuff like that had been going on for some time when ISIS showed up and many decided to support them since they were able to stop that nonsense. Didn’t take them long to realize that ISIS was a criminal organization that was operating under the guise of a religion. Their local economies were modest in the best of times and pretty lousy when ISIS showed up who promptly made it worse thru mismanagement and extortion of the general public. It appeared that ISIS leaders’ sole intent was to extract as much cash as possible from the inhabitants inside their caliph then abandoning the enterprise once everyone was broke. I believe their top leaders bailed with the booty in 2015 to try their luck again elsewhere, like in Libya.
ISIS did recruit quite a few Syrians and Iraqis who were more interested in earning some income and getting a few meals each day than some silly jihad nonsense. I’m wondering how many have been shooting their zealous comrades so they can flee from their positions to surrender or are seriously considering doing that when the opportunity arises?

How to explain that ppl go to Idlib.
My first question would be. does from the FSA Jihadist Figther the family have a choice or not…
I think if the women have a choice she would stay together with the children and parents maybe. But when you look how Fanatic this ppl are, i mean they believe in “Virgin in Heaven” , woman need to have Burka….it comes so that the Joihadist say that he goes to fight in Idlib and all must go.
Sure there are woman that are also Crazy,but this is hopless.

Isn’t the army mainly sunni? There might be a sectarian taint to the war but it’s mostly self-defence against US aggression.

This war is against terrorism. It is not a religious war at all.

Yep, virtually same as for Syria as a whole.

Seems Julius Meinel has experienced the perception management and manipulation of CNN / BBC press , and has come to believe that ISIS and Al Qaeda , Al Nusra et al are actually Syrian “rebels” , rather than imported jihadists from around the world , but 80 % Saudi and Tunis .