The ISIS stronghold of al-Bab in northern Syria is almost fully encircled by Turkish and Syrian forces, advancing from the eastern and southern flanks of the town.

On Saturday, pro-Turkish militant groups and the Turkish army seized the town of Bizaah after two days of clashes with ISIS terrorists and reached the eastern outskirts of al-Bab. Meanwhile, the Syrian army’s Tiger Forces and the National Defense Forces (NDF) liberated the strategic town of Aran and continued to develop an advance in the direction of Tadif.

According to reports, up to 3,000 members of the ISIS terrorist group could be encircled in al-Bab if Syrian government forces or pro-Turkish forces take control of Tadif or a road from al-Bab west of Tadif. If ISIS forces are going to withraw from the town, they have to do it now or they will be encircled and destroyed. 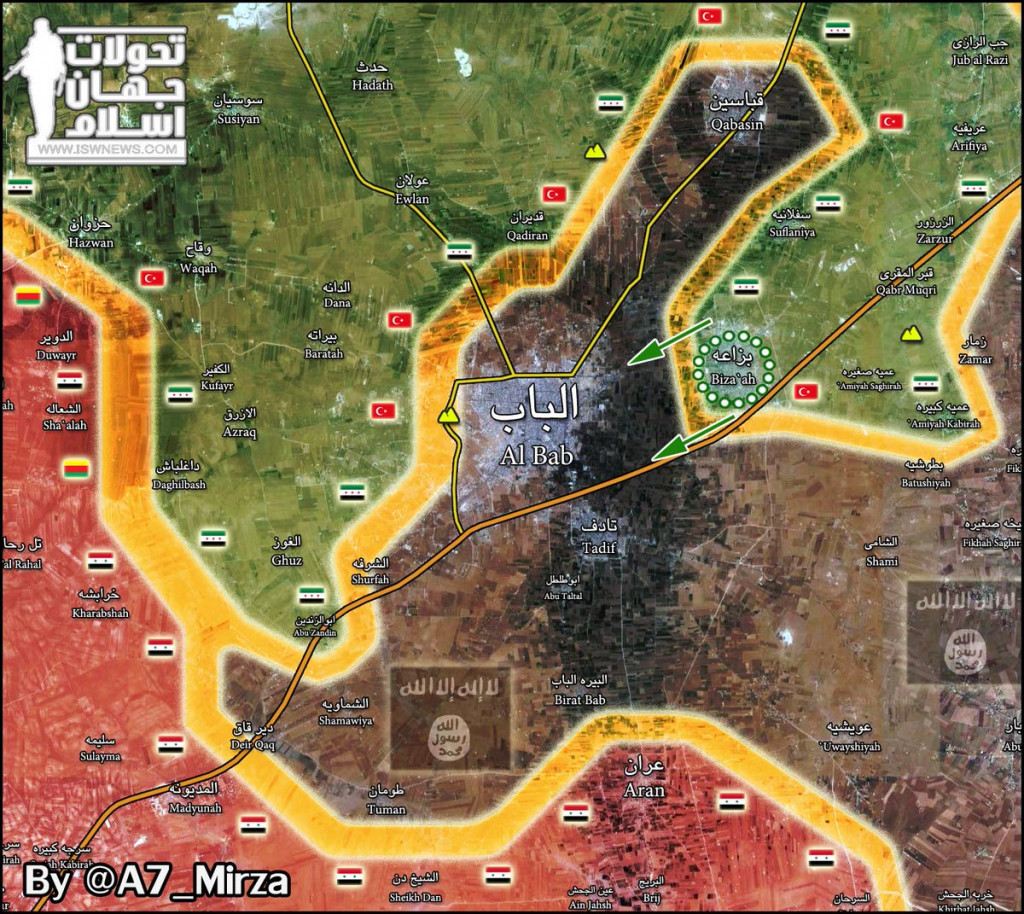 And again SF is with outdated map.ISIS have taken control of Bzaa – https://twitter.com/AhmadAlkhtiib/status/827953875151945729 . And this guy is anti Assad and pro opposition.

All this back and fourth, i’m tired of the front shifting between the FSA and ISIS constantly.

Basically a comedy show at this point.

Well I think the town will go few times more to FSA before it is secured and captured by them.This is good for SAA.They can take the ISIS territory to Aleppo water plant in the next few months and FSA still wont be able to capture Al Bab.

Syrian military ….a few T 90 tanks….truck army with 23 mm like ISUS. They have quality TAC air with Russia,….yet it’s slow game turn as the military in the field is low numeric. Other nations in history would have numerous Brigades for an opportunity, Syria is lucky to move with just 1 cohesive brigade in depth unit.

Palmyra and current Der Ezzor crisis show the limited strength of Syria’s depleted military. Assad must draw citizen support…..even access former Rebels who have signed Amnesty and will fight for the Central Government. There is like 50,000 available men….it just requires organization to get them in the que.

One of the reasons the Colonial powers and now…the US. ..dominate over Muslim nations, …is the Regional/clan authority mindset of the Islamics. Kinda like the Bedo. …who will attack another tribe for drinking at their well.

Syria has numerous regions where the militias will not leave to fight elsewhere. In a way….the Hezbollah of Lebanon surpass these mental midgets, Hezbollah. ..less than 8,000…fight continually with various Syrian operations .

When Cortez landed in the New World,…he found tribes which were against the Aztec central power, Using them…he culled a large force and confronted a stupefied Aztec Authority Which was incapable of matching the menace against it.

Syria is a similar situation to Iraq….except Russia and Iran are there….yet cautious.

Dude the article was written in the same day with the Tweet! How do you know the Tweet was before the article? You don’t! Southfront is doing a great job, plus you suggest they should watch Tweets instead of doing journalism! If you want news from Tweets and opposition go to BBC and CNN! Can you verify the dude is reliable and corroborate what he says? No you can’t, so yeah, think it through before posting nonsensical criticizm!