On April 15, ISIS fighters shelled a civilian area in the Tadamon district from their positions in the Yarmouk refugee camp with seven projectiles, the Syrian Arab News Agency (SANA) reported.

A source in the Syrian Police told SANA that one child had been killed and nine other civilians had been injured in the shelling. 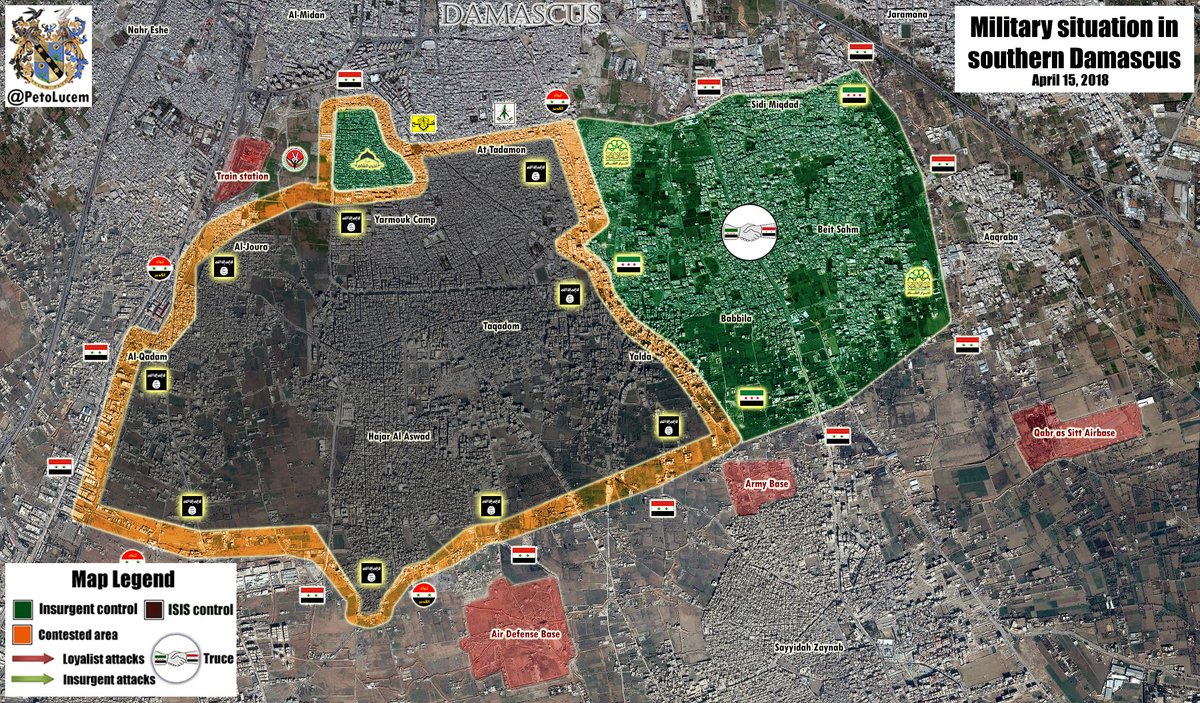 ISIS shelled different civilian areas of Damascus multiple times during the last week. Syrian pro-government activists viewed the shelling as a desperate attempt by ISIS to deter the Syrian Arab Army (SAA) and its allies that were preparing to launch a large military operation against the terrorist organization there. 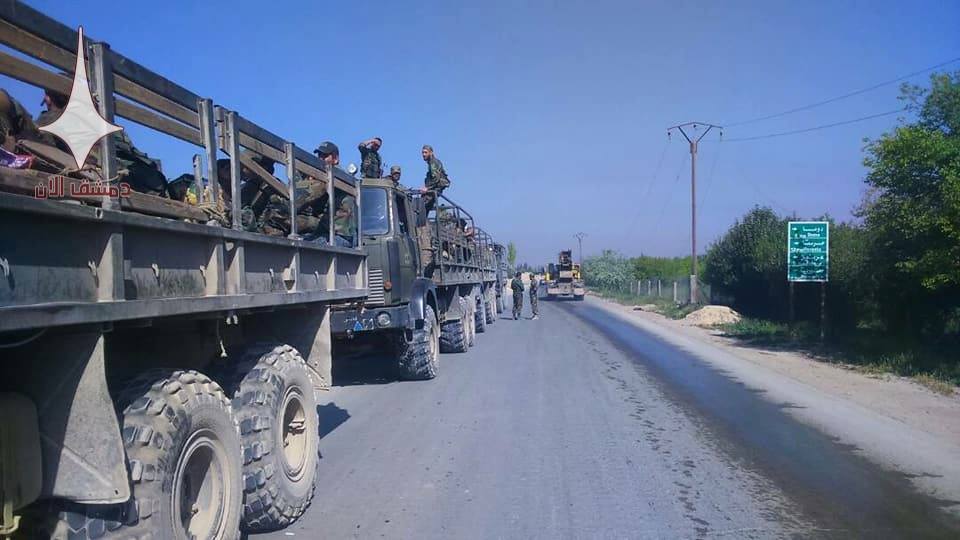 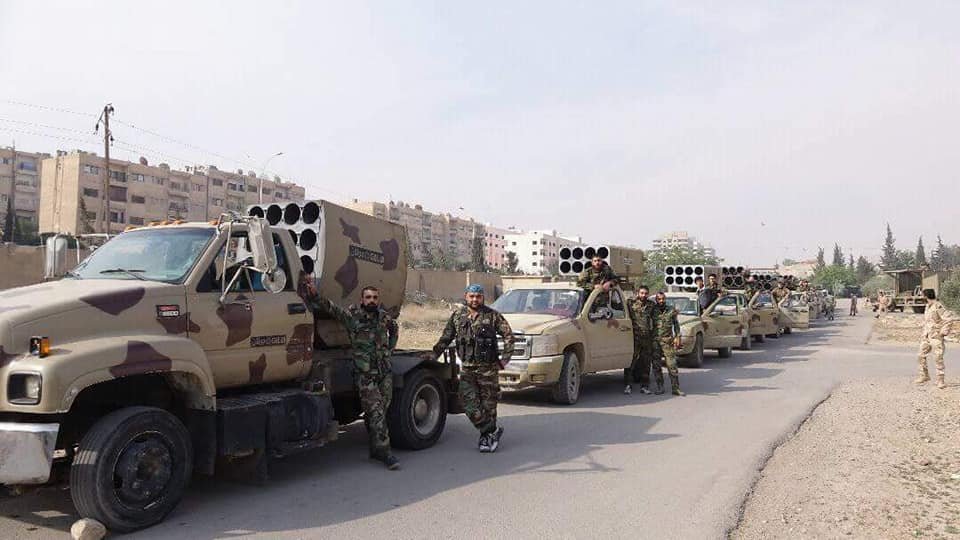 A source in the SAA told SouthFront that the attack on ISIS in the Yarmouk camp could begin within hours, but declined to provide further information.

Local observers believe that ISIS fighters in the Yarmouk camp may be able to resist the SAA and its allies for few days or even weeks, but their defeat is inevitable.

Discuisting Wahhabis now will be your end in the Damascus for good. For you Daesh there will be no busses if you are begging for them, only bullets in your brains.

Exactly. No free bus passes, as they are not worth wasting time on. Eradicate the filth as one would an infestation of vermin.

One day there would be no spare Syrian land to transfer them two. Than SAA should send them “back to Columbia”(c)

Let’s hope so, or at least to jail to all who surrender.

ISIS is not DEAD ?

jerry hamilton
Reply to  MADE MAKER

And moving the remaining numbers to new locations.

Assad, Putin, Ruhanni and all other Muslim leaders must know Israelis are their main enemy. Coordinating, cooperating and allowing them in your countries is like butchering your own nations and destroying your own countries yourselves.

Make nuclear and chemical weapons and ballistic missiles for Israeli morons because without Israel this world will be a true paradise.

And the Moslems have been terrifying the Israelis ever since Mohammed. The Moslems have to stop their barbarism and officially repudiate jihad against the Jews and Christians before there is ever going to be any peace. If you can’t defend your religion philosophically and scientifically and historically, then you have a false religion and sane people drop it. Where trade does not cross borders, armies do and Israel needs to figure out how to set up freedom and English common law in Palestine. Once freedom breaks out in Palestine, attention is going to shift from how to kill all Israel and steal what they have to making stuff of your own and building trade relations with the talent that is festering in Palestine under the jihadist hate-fueled Hamas brutes.

Did you just came out of coma?

Nope.. that was just an idiot who doesn’t know what he’s mumbling about..! He need to pull out his head out of he’s anus to see clearly..!

LOL quiet you impetuous imperial thug wearing a velvet glove to type. Who are you to be so arrogant as to know the Palestinian solution. You can’t defend anything either because YOU are the bad guy, and referencing your friends materials that refer to yours in a loop like MSM don’t work here.

Who are you to judge the so called sanity of people. A key basic principle of modern physics is referential( I may mistranslated from French whatever), meaning depending where you are,time behaves differently to put it in a super simple way. You are projecting the same crap without walking a mile in Palestinian shoes, your little jab at Hamas proved that, when we know Hamas is controlled opposition by Likud.

I accuse you of being an intellectual Barbara by peddling the Zionist crap to us!!! You can take your Saudi slush funded trade and shove it!

Putin should know that due to Israel, US, UK and France the Middle East states defences have been destabilized. Putin should have to provide to Syria at least enough S300 and Pantsir-S1 for air defence and smart bombs and guided missiles to stabilize the defence in the region. Putin should produce their weapons in Syria to reduce the logestic cost and save money that spend on logestic. In Syria the labour cost is low and raw materials are easily available. Strong Syria is a good defence for Russia.

Qalamoun and Homs next!

Where is the Zionists concern for civilians getting bombed by terrorists? Oh I forgot ,they are the good guys,like the paid white helmutts ,Its only a crime if Syrian forces attack the terrorists.

Don’t take prisoners. Some may be from the Mossad.

No take them, good intel and trading cards.

is it possible that ISIS could shell chemical weapons from that area under damascus to Duma?

There was no chemical attack. Look at those videos.

He didn’t say there was… That’s not to say that ISIS in that area, if they have been supplied the chemical weapons from their sponsers, would not hesitate to either use them against attacking forces, or more effectively use them as PWK suggests, in order to frame Assad and possibly save their ass should the US be willing to risk that fight.

That’s what worries me. Although let’s think about it. Twice Trump said I want to pull out, twice….within same week, twice, CW weapons “incident”, I am not calling it an attack, that’s putting cart in front of mule. Twice lame ass cruise missile attacks in response.

what does that mean, is Trump genuine when he says he wants to pull out? I think it’s political suicide with the voters if he attacks again. This is so stupid and infuriating, thank god putin is not a cowboy!!!!

It means too many psychopaths handling, managing the WH and most of them reports to Satanyahood..! The Devils are in.. grey Britain..!

Will Trump launch missiles to save Daesh?

If Israel tell him to.

Maybe they will be airlifted to Tasil or Sinai? https://en.wikipedia.org/wiki/Kunduz_airlift

It will be another FF chemical attack. The Shite House, Tuppence and Tricki Nikki have all highlighted that another Chemical Attack by “The Syrian-Regime” will have very serious consequences. Yanki Zionist Pigs have already landed boots in Jordan. So, it is probably going to be sooner than later. And the Harry S Truman Strike Force must be in the Med by now. What a crowd of fucking Gangsters…………..

There’s a little problem… Tomohowks don’t seem to be very effective. Last year about a half hit the target and military result is very little – airbase is operational next day. This time it’s a total fiasco. World is starting to question US abilities.

The US is deploying otherwise idle hardware and gathering intelligence on Russian electronics from every direction, above and below.

There’s a war on going and neither nation is acting aimlessly.

Very true, but I think Russia, China, Iran and Syria have gained the most intel from these last two attacks. Also lots of English new cruse missile bits and IC’s to decode.

We note that Bear did not use S-300 or S-400’s so US did not get Electronic intel on them. And if Bear supplies Syria with S-300 you can bet it will be export tech only.

A would agree that they do but don’t you think that is a “belateral” process?

Indeed I believe both sides would be engaged in this activity, but there’s much less to learn about commonly used and long-existing tomahawk cruise missiles than there is to learn about modern Russian anti air technology, all else equal.

I should have said initially, ‘idle and relatively dated hardware’ and perhaps I’d have been more clear in my expression.

Sorry for misunderstanding (Self learned English). But for the sake of debating :) It wasn’t exactly the newest tech that was used on 14th, is it? Let them swallow what happens when S125/200 is at work :) We should not demotivate them so early by using new tech, do we? Sorry, could not resist from some joking but there is some sense in the above?

While the original design of the Russian anti air technology now available to the Syrians dates back many decades, improvements and upgrades have likely continued advancing since the last time the US confronted this technology in a live theatre.

Too, the intelligence gathering technologies have advanced since the last time Americans faced Russian missiles.

So, here it comes the next False Flag Chemical Attack, delivered by ISIS to their Patron Nation. What a serious Fuck-up is the Pentagon.

Lets home the four large Russian supply ships one the way, have reached Syria first. I expect also Bear by Air will be resupplying SAAF SAMs before attack is launched.

This one will be fast and furious, not slow and measured like East Ghouta was.

These terrorists know that are lost and death already, only USA-Israel-NATO can save them. However, in this pocket there is any white helmet, that is a bad news for them. So, USA-Israel-NATO need to figure out some magical false news.

goe the SAA destroy the last pocket djihadist at goutha!!!!

The first truck is the older gm style we called topkicks. They are great little trucks that love to take a beating. They are not very stealthy though some of them makes sounds that a train does but truck drives good!!