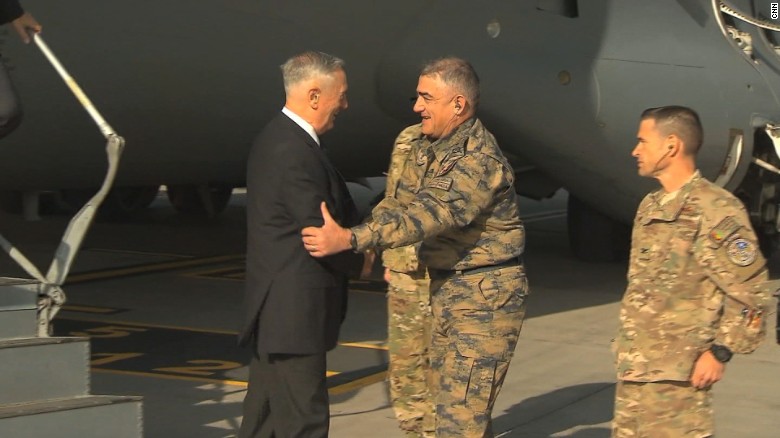 According to Amaq, ISIS fighters attacked the Turkish forces training center, the UN office and the US Army training field in the military section of Kabul Airport. Amaq also said that ISIS fighters targeted a US plane on the runway of the airport with SPG-9 recoilless gun, RPG-7 rocket-propelled grenades and mortars.

According to reports, 5 civilians were injured in the ISIS attack on Kabul Airport. Moreover, Kabul Airport chief Yaqub Rassouli said airplane hangars and some helicopters were also damaged in the attack.

Mattis commented on the attack at a press conference with Afghan President Ashraf Ghani by saying that “An attack on an airport anywhere in the world is a criminal act by a terrorist.”

“This is a classic definition of what the Taliban are up to right now. It defines their approach to how they see their role here and if in fact this is what they have done, they will find the Afghan security forces continuing on the offensive against them in every district of the country right now. So it is what it is, but it’s also the reason why we band together, and we don’t question what we’re doing here,” Mattis added holding the Taliban the responsibility for the attack.

The Taliban spokesman claimed earlier that Taliban was behind that attack, and said that Mattis was the main target of it. However, it is more likely that ISIS was indeed the attacker as it provided detailed info about the attack that is identical to Danish and US Army statements.

Looking at the connection between IS and US – (there is only a small difference in the word ;-) ) it may be not excluded, that this shelling was even ordered by the US-Stay-Behind to give the impression, that IS should really be fighting against the US. Of course the ordinary believing muslim will not know about but all the higher grades should be involved as we are coming to see this in Deir Ezzor….

Ant this of course why ‘the higher grades’ are travelling club class in US helos and low value ‘others in the know’ are being killed.

Right after… Give me a break. It is US who is moving those ISIS terrorists with helicopters from one point in Afganistan to another. It’s just a big muppet show. ISIS is profitably to US cause it is fighting with Taliban.

This has all the amateur hallmarks of a US false flag with their ISIS pals. ” Lob a few shells at the airport after we tell you that Mattis is far away and safe”. Just so that the Yanks can say. ‘ It happens to us as well you know ‘.