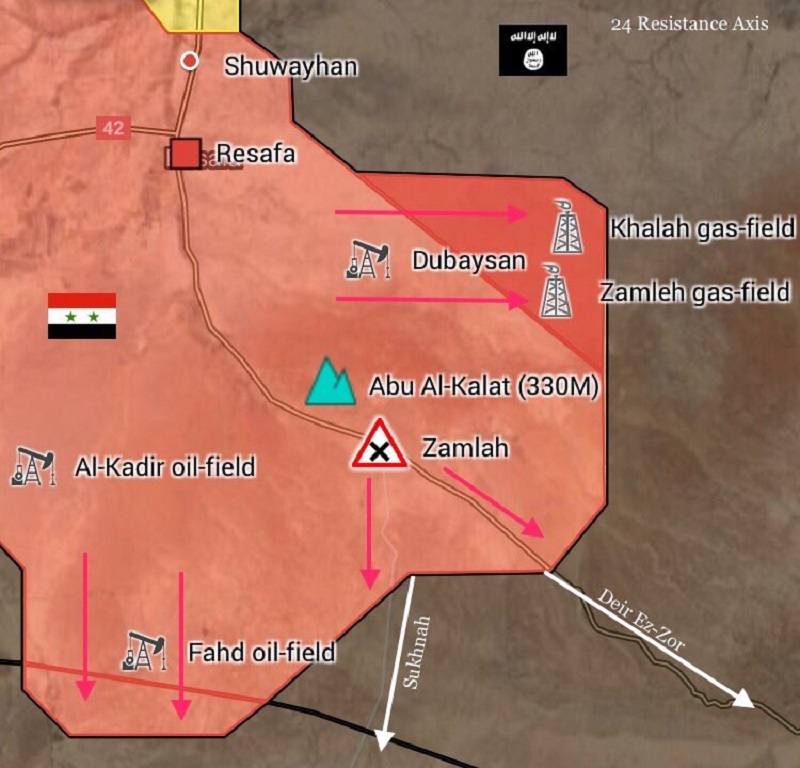 On Sunday, the Syrian Arab Army (SAA) continued its operations against ISIS in the southern Raqqa countryside where it captured Eastern Zamlah village, Zamlah pumping station and the gas fields of Zalmah and Khala’. Furthermore, the SAA managed to fully capture Fahed oil field. 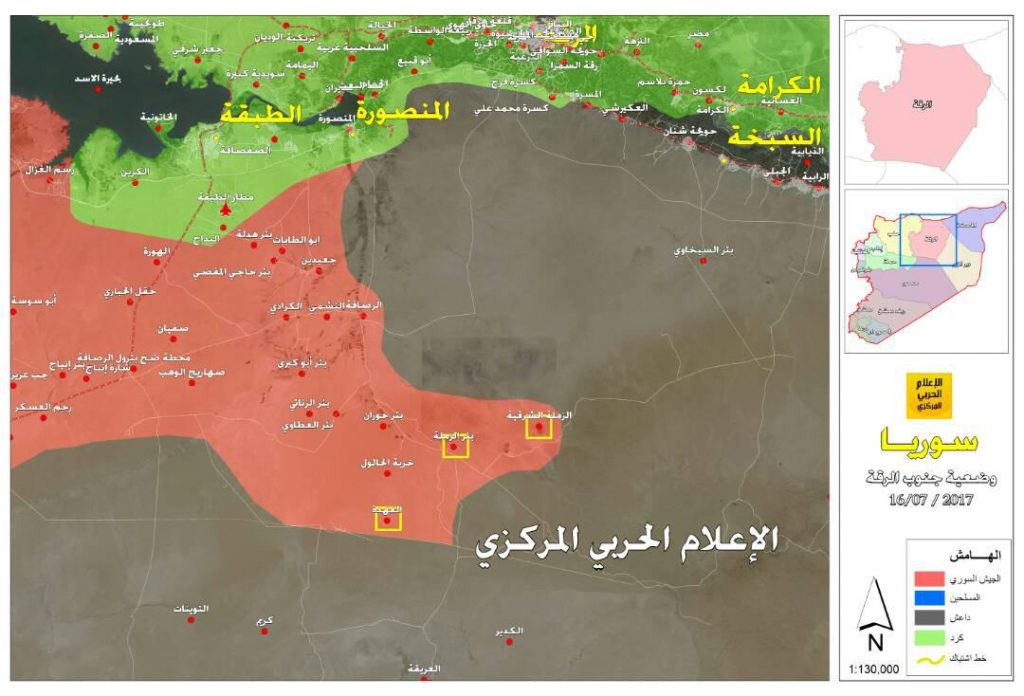 Meanwhile the SAA called the civilians from Maskanah and Deir Hafer areas and its vicinity in the eastern Aleppo countryside, to return to their homes and farms. Civilians in the areas controlled by the Euphrates Shield and the Syrian Democratic Forces (SDF) had demanded that the Syrian government allow them to return to their villages after ISIS withdraw. However, the Syrian government was unable to do so before fully clearing the area from ISIS. Now, this problem is solved.

From its side, ISIS claimed the killing of 12 Syrian soldiers after targeting an SAA gathering in Hamima village in the eastern Homs countryside with a VBIED followed by an attack by ISIS fighters on SAA positions there. ISIS also claimed that it destroyed two SAA tanks with ATGMs during the attack, as well as, captured a T-62 tank, a bulldozer, 23mm / 12.7mm guns and two Konkurs missiles. From its side, a source from the SAA confirmed that the army managed to repel ISIS attack and maintained all of its positions in Hamima near Deir Ezzor.

SAA should also advance South along the road from Al Amalah to Sukhnah. This will allow SAA cut off the ISIS supply line in Qudaym and make nice buffer zone in case ISIS will try outflank SAA

where is that road and qudaym?

I dont think they have troops and logistics for it. We might hope for it.

One fork to sukhnah and one fork to Der ez. Isis can withstand it for to long from both sites. Close the gap with first fork.

No attack ISIS every where close the pocket and advance To Deri Azur and in other areas at the same time.

There is no pocket – yet

Your socalled pocket is more then 60 km wide and most of its sides are less then barbed wire.

South of Al Bab ISIS could get in and out troops having 1 km between Kurds and SAA. You even proclamed and celebratet, Al Bab now was besieged.

So rubbish with You.

I would be delighted to see DAESH trash come out of their bunkers around Uqayrbat and be destroyed in more open ground. This would make SAA’s job much easier ! I wonder how much transport they got left? Maybe they should gather into a convoy, this would make a great Russian video !

You really dont get it. They have very many depots out there and sont need all the trnsportation, You ask for. Many walk and runs too with relativly light luggage.

And they almost never come up a You wish. They do take transporttation risks by vehicle but now and they those are destroyed fine.

You can ask them make a parade.

Is SDF a kilometer north of resafa or is it not?

Appears that SAA has control over Shuwayhan and a few villages to the NE along the pipeline road to the river. Have no idea why the lower map shows a shark fin to the north, this area was held by SDF.

very nice but sad to hear about the twelve SAA casualties

Those are ISIS claims. They always claim lots of kills even as they are beaten around like old dogs.

Hahaha yes hopefully it is false or wildly exaggerated, they are getting manhandled like Steven segal does to thugs in his movies :DDDD

Im smelling a trap friends… If our captured “corridor” from Resafa to Sukna grows longer and longer, Daesh will react with fast attacks on SAA´s flanks. The roundabout of Resafa is desert but near Sukna the mountain-chains begin.. Dont forget Daeshs big striking-Force East of Homs (south of Ithriya…) Very dangerous situation now… US-rael will provide 1st class Intelligence to Daesh…

I smell, they SAA should be more carefull.

So far the SAA advance is pretty wide. Also moving south along the other road to Bir Qudaym would make the advance very wide. Will the Desert Hawks make a surprise appearance? Of course moving SW on road to Deir Ezzor across Mount Bishri looks like a risk that should not be taken at this point. GOOD TO SEE THIS FRONT MOVING !