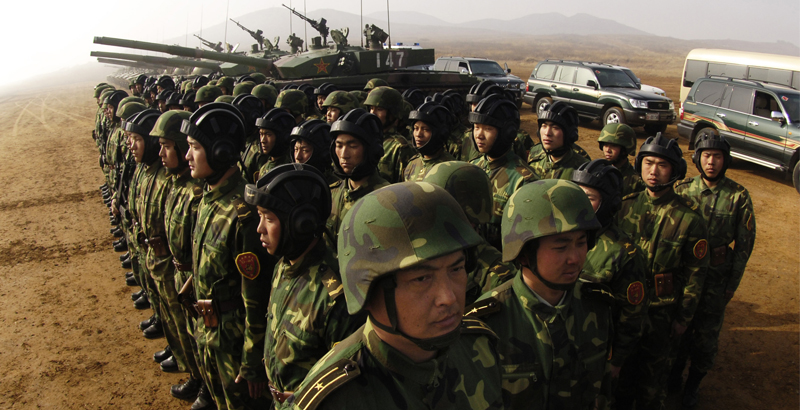 Chinese troops have entered Afghanistan and presumably started to fight against Uyghur militants, who swore allegiance to the Islamic State (IS) terrorist group, the Vzglyad newspaper reported. As the newspaper noted, it means that Beijing has started its first intervention since the times of the invasion into Vietnam in 1979.

The IS has for the first time threatened China, publishing online a 30-minute video message. According to the RIA Novosti news agency, the footage includes a scene of burning of a portrait of President of the People’s Republic of China, Xi Jinping.

“You, the people of China, who do not understand the language of other people. We will come to you and shed rivers of blood as revenge against the oppressors,” creators of the video threatened.

The video also shows everyday life of terrorists in camps, located somewhere in the Middle East, presumably, in Iraq, and, in particular, exercises in martial arts among adolescents. At the end of the video, a Uyghur militant threatened China and then executed a person, who was declared to be an informant in the footage. According to spokesman for the Chinese Foreign Ministry, Geng Shuang, he has not seen the video, but it is a fact that “the terrorist forces in Eastern Turkestan pose a serious threat to China’s security.” According to some reports, from 100 to 300 of Uyghurs-separatists have joined the IS.

As the newspaper noted, it is likely that the video message was an asymmetric response of militants to introduction of Chinese troops into neighboring Afghanistan. A few days ago, the Military Times information portal, affiliated to the Pentagon, reported that Chinese troops had long ago crossed the Afghan border. “We know that they are there, that they are present,” the website quoted an unnamed representative of the Pentagon. However, neither Beijing nor Kabul confirm this fact.

As an evidence of the China’s military presence in the country, the portal published a photo of the Chinese Dongfeng Mengshi EQ 2050F armored vehicle, moving on a mountain road allegedly in Afghanistan. According to Military Times, soldiers of the Chinese People’s Liberation Army (PLA) fight there along with servicemen of the Afghan army. The operation is conducted along a 60-kilometer section of the common border in the so-called Wakhan Corridor. This corridor is used by Uyghur militants, who decided to join the IS. As the portal noted, this is the China’s first intervention in modern history since the times of the invasion into Vietnam in 1979. The website added that such activity of the Chineses in Afghanistan can be beneficial to the US.

Despite the fact that such rumors appear from the end of the last year, military experts think that it is most likely that not units of the Chinese Army, but formations of the People’s Armed Police operate in the Wakhan Corridor, located in inaccessible mountainous terrain.

According to an expert of the Center for Analysis of Strategies and Technologies, Vasily Kashin, the Chineses conduct operations against local bases of Uyghurs without any consent of the Afghan government. Kashin supposed that Chinese soldiers just enter the Afghan territory, eliminate terrorists and leave the country. “I do not think that China will even create any checkpoints in the Wakhan Corridor,” the expert told the newspaper.

As head of the Central Asia Department at the Institute of CIS Countries, Andrei Grozin, noted, Beijing is traditionally in close contact with Kabul, but, at the same time, apparently, the country also has friendly relations with some part of the Taliban leadership. China has been undertaking attempts to participate in the intra-Afghan settlement during the past two years. However, according to Grozin, Beijing will not dare to launch a full-scale invasion into Afghanistan, a country, in which the armies of many empires suffered a fiasco. “Beijing does not have a need to fulfill ‘international duty’ in Afghanistan,” the expert said.

Kashin also expressed his doubts that there will be a full-fledged Chinese military presence in the country. However, he supposed that Beijing could involve private military companies in Afghanistan. “There is a training camp in Xinjiang, which, according to rumors, was organized with the help of founder of the Blackwater company, Erik Prince. Former military are trained to perform security tasks there,” Kashin told Vzglyad.

China is going to wipe out the scum. Oh joy!.

I’m sure China would love an excuse to purge their Muslim problem from China.

In that case then the Chinese take no prisoners.

no need. the chinese only have to pee together and all ISIS gets drowned.

”activity of the Chineses ”