The Syrian Army has failed to take control over Mahum village near the Jirah airbase and has been forced to retreat. 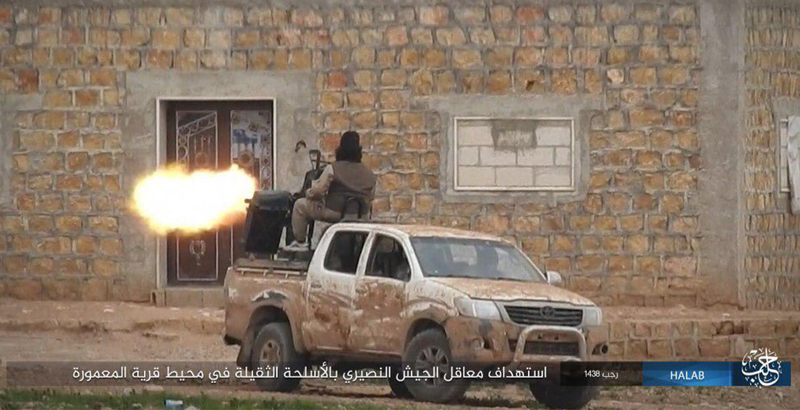 The post is based on this article by Voyennyy Obozrevatel blog

On March 31, terrorists of the Islamic State (IS) group repelled an attack of the Syrian Army in the area of the Jirah airbase, located in the east of Aleppo province. The military base was actually already semi-surrounded, but the attempt of Syrian troops to take the last village, located in the vicinity, turned out to be a failure.

On March 29, the village of Mahum, located 2.5 kilometers to the west of the airbase, was briefly taken by the Syrian Army. On the morning of March 31, groups of the Special Forces, backed up by artillery, tried to enter the village, but met with fierce resistance. Then, a bomb-laden vehicle was sent to positions of the government forces. According to a statement of the IS, 11 Syrian servicemen, including one officer, were killed in a powerful explosion.

Immediately after the explosion, terrorists launched an attack from Mahum village to the west. During the battle, they managed to knock out one tank and destroy a pickup truck, equipped with a 23-mm anti-aircraft machine gun. The IS counterattack was unexpectedly strong. Apparently, the group’s leadership dispatched additional forces to the Jirah airbase in order to prevent advances of the Syrian Army to Raqqa province.

The government forces not only failed to take Mahum, but also were forced to retreat a bit to the north-west, along the N-4 highway, connecting Aleppo and Abu Kamal. According to the IS, the army retreated 3-4 kilometers, losing control over the villages of Mushrif and Zakia. Official sources have not provided any information on the situation in the area of the Jirah airbase.

An IS suicide-bomber and his blowing up near Mahum village, March 31, 2017 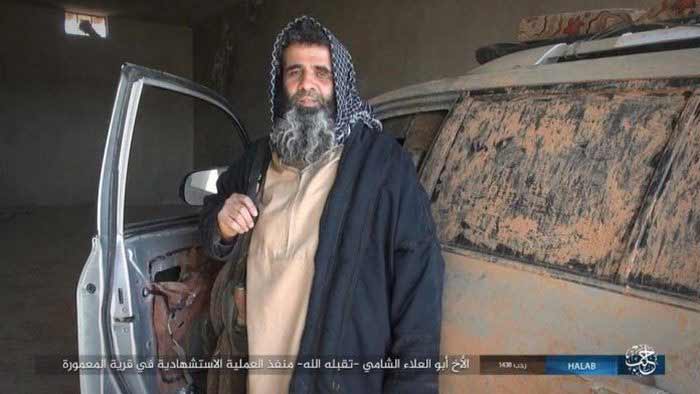 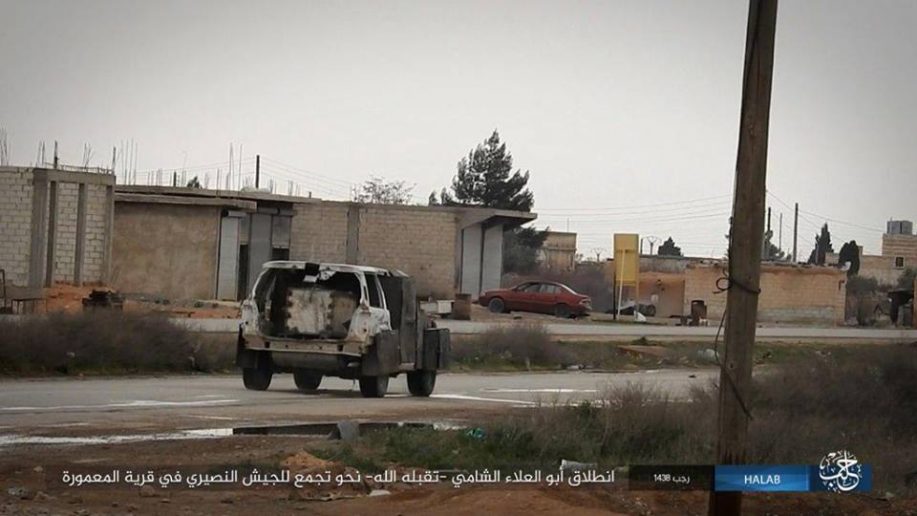 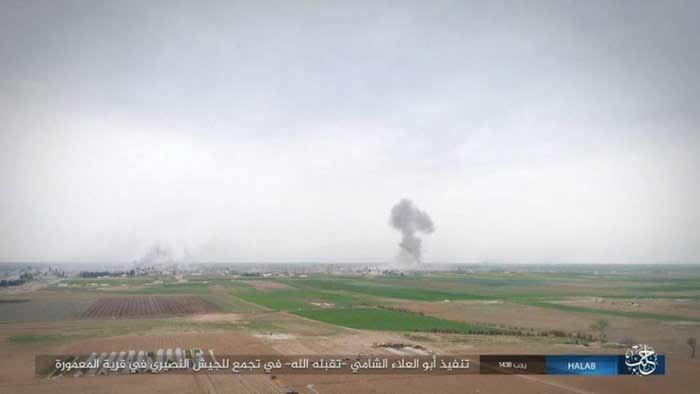 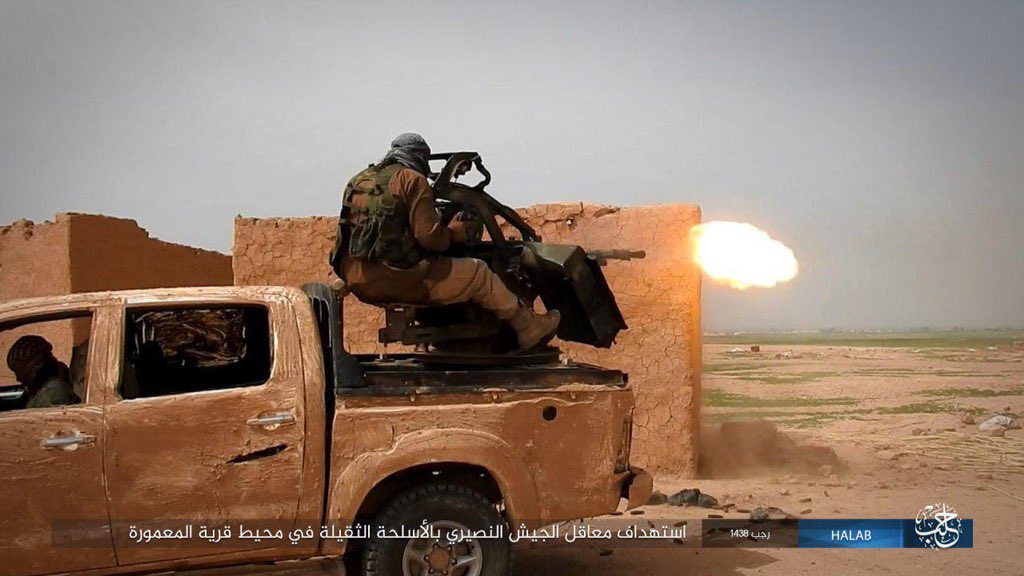 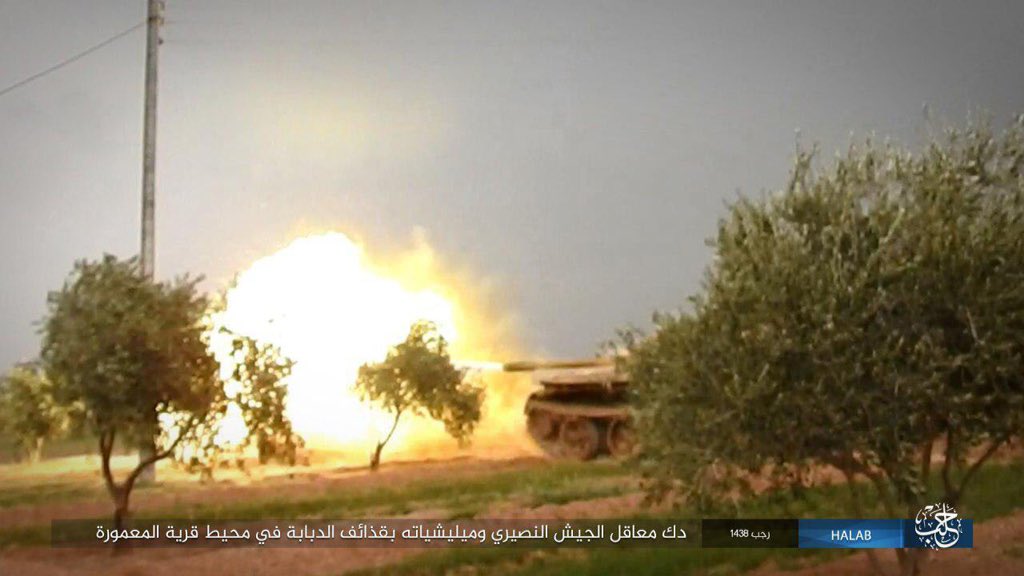 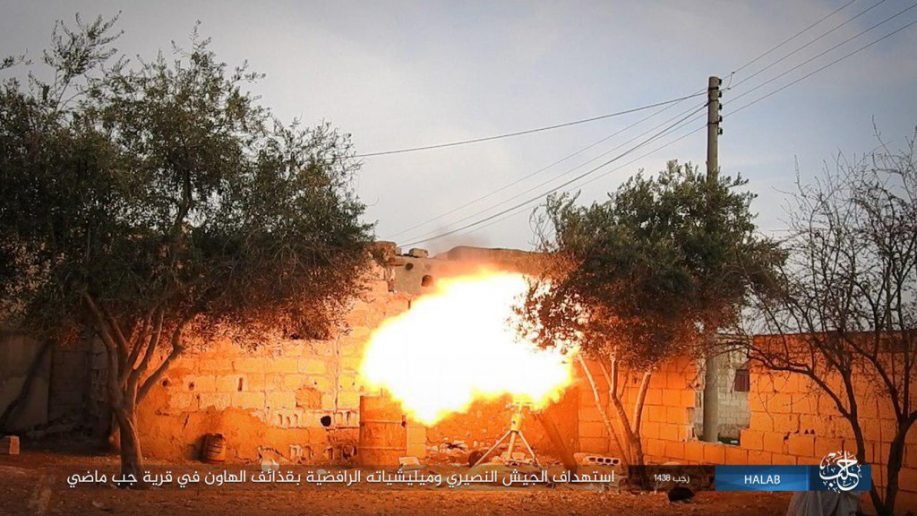 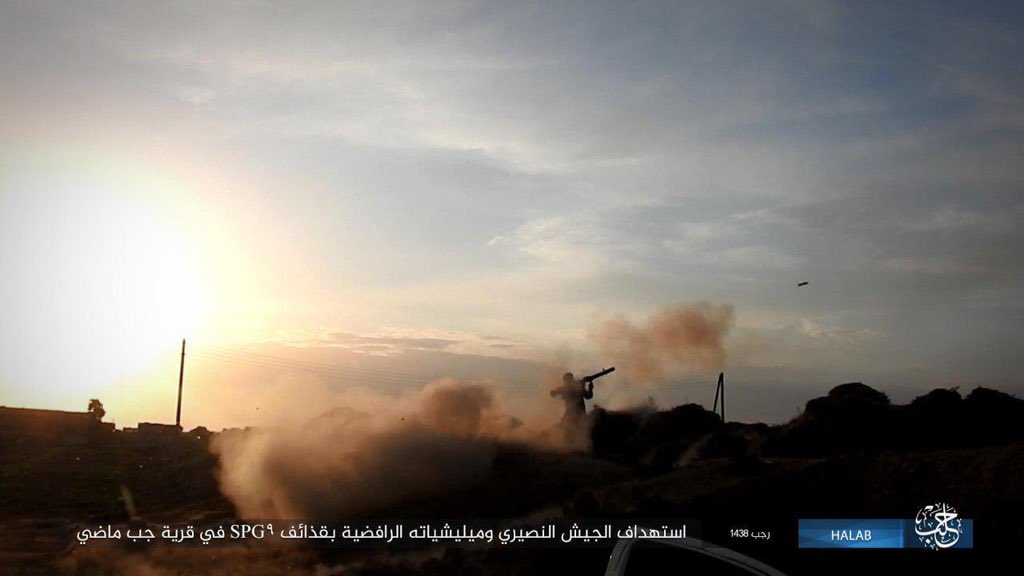 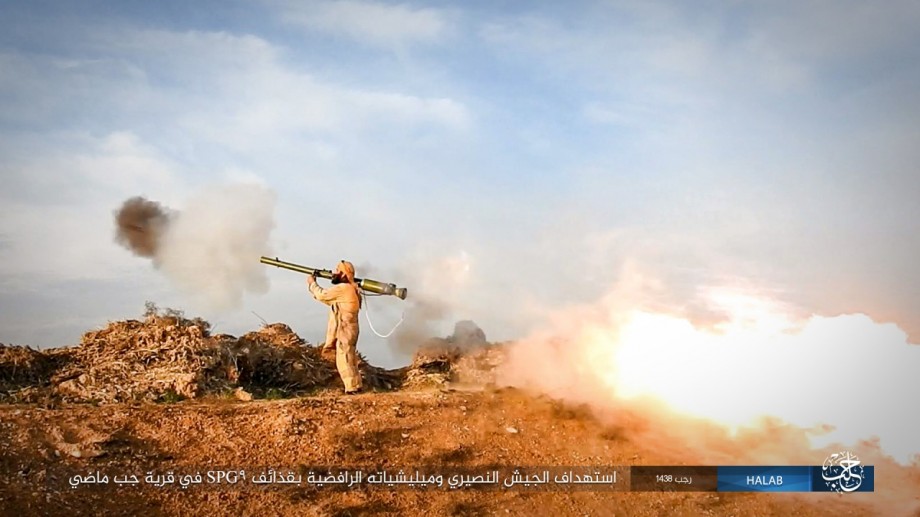 Only delaying the inevitable……

Right? Only a matter of time!

SAA now has less competent forces in East Aleppo . A lot of TF have left to Hama .

Should they come back? Or another strategy?

No . SAA should open another front from Khanaser .

yiu are right, but saa and its funs are not interested in this danger.

Yep. The SAA lacks the manpower for an adventure of that sort. Their best bet is to stay put and watch ISIS pull fighters out to be redeployed to Raqqa and Deir Azzor. Their convoys will have to travel thru open sparsely populated wastelands so should be easy prey for the air forces.

this is not bet. without road 90 theay have no chance to comtrol south syria, no chance to control smuggling of weapons for jihadists. when took first time palmyra, there was enough manpower to get this territory.

you are watching and FSA is takeing the area from isis is removed. fantastic!

SAA had chance to capture Eastern Qalamoun years ago but the commanders refused . I dont know what they think about Qalamoun now. It is their decision

shoot them. and you.

They’ll stay put for awhile to lick their wounds and wait for replacements. I guess the SAA failed to consider that ISIS could be using the airbase for reorganizing their units that withdrew from the north and east of Aleppo so had plenty of fighters on hand even after sending a large number down the river to block further advances by the SDF to the north. The SDF should draw more away if they advance further south from the airbase and lake bridgehead to take control of the interior roads. Those cross several deep wadis and can be made useless by bombing a key bridge on each one to force ISIS onto a few which can be effectively blocked by determined defenders.

Daesh could use some fresh Russian and Syrian airstrikes here!!! ?

Where is China when you need them?

Why do they keep including China as a militarily pro – Assad? Yet I never heard of Chinese forces or military advisers helping SAA.

China sent only medeical help. for botth army and civilians. Politically is pro Assad, but will not enter the war.

china just sell drones to saudi-arabia.. us refused, because of jemen.. so wtf..

china is for buseniss. china will not fight with western countires. china is not aalied of russia. so it is.

The Daesh are desperate to keep the Syrians away from Raqqa. They know the Americans don’t mean business and will help them take Deir-ez-Zor, provided they give themselves a new name.

Spot on. ISIS are just a piece on overall chessboard for US – to be leveraged as best as possible for US strategy. Which was always about regime change, and is now focused on back up partition plan B, cleaving off and redesignating ownership of north east and eastern corridors of Syrian territory. Much like Turkey did at Jarabalus and Al-Bab, US is as likely to cut territorial deals with ISIS as much as actually fight them on Syrian territory.

Wrong strategy I think. They should encircle the base starting with some more distant villages. If you attack a village that near the base basically you’re not encircling it but you’re entering it! The most effective way of fighting ISIS, as it has proven to be, is not confronting them directly but encircling them.

It’s OK. They just need to keep Daesh on the defensive. Troops had to be allocated to Hama in order to stop Erdoscum’s proxies from overtaking the capital city there. Once the Hama salient is crushed, Tiger forces can be redeployed to the area and deliver the coup de grace to Daesh.

Yes it is the first attempt to totally surround and probe of the ISIS defenses. The SAA will try again and succeed soon enough..

SDF repels all attacks. Had a massive two prolonged ones today.

Daesh claims to have killed 65 SDF in counter attacks around Al Tabqa area today, but did not hold their ground.

I pray they continue that way for as long as possible. The US wants to go it alone with the Kurds, let them taste the sweet easy win.

Absolutely, I hope Daesh pulls most of their dirt bags back to defend Raqqa. This will give SAA a much needed break. :)

Because US is in bed with ISIS. They play double games, always do. Obviously, the longer SAA/Russia get bogged down in other fronts with ISIS/FSA, the better for them.

Well, ISIS did withdraw quite a few fighters from the north and east of Aleppo. Their leaders probably have the bulk of them now stationed at the airport, towns and villages along the river highway since those should be storage depots for units further to the west and access to road networks for their rapid redeployment to check advances or withdraw from the region.

The SAA should threat Al-Waer (northen Pamyra) an Tabqua simultanousely before probing Jirah. Maybe an advance trough south of Jirah will add some effect. South threats shoud be weak but highly focused. USA fears the SAA into Jirah Air base beacause in this case the SDF advance to Raqqah will be stopped until Putin wills.

jirah is easier then yours suggested other two ways. and look, the SAA is not able to take 1 little airbase.

Jirah airfield will probably fall within a week. The SAA held out at surrounded Kuweires airbase for years. Heroic SAA defenders for sure.

within a wweek. and already 2 weeks did not fall. kurds with americans took tabqa (bigger) in 1 day. so, idiot SAA.

ISIS is incapable of defeating a well trained and determined modern army. That’s why they weren’t able to take Kuweires Airbase and Deir Azzor from their veteran defenders. The Kurds have always been determined and now are kicking ISIS ass with their Arab allies after receiving top-notch training from Coalition Special Forces. They go in boldly and are willing to accept losses, which freaks out ISIS. You ever bother to scrutinize photos of SDF soldiers? Quite often you’ll see them with silencers on their rifles. Those are only needed when one gets real close to quietly pick off enemy fighters without drawing attention. Gotta have some balls to be sneaky like that.

i know this. and only wonder, why did not this russia, too. looka kurds + arabas under americans are 80 000 + 100 000. this is more then assads soldiers. anh how many people live under assad and in rojava?

Nah. The SAA needs to clear ISIS out of the Palmyra region first, which includes the T-3 airport and nearby crossroad to block E-W ISIS traffic in the south. While they’re doing that their units along the Aleppo Lifeline should be receiving reinforcements before the SAA starts pushing ISIS out from the SW to the east. Their only way out will be to the northeast and the additional SAA units would be able to move forward en force to block key roads. That’s wide open steppe country holding nothing but destroyed villages and hamlets so ISIS will be stuck where there’s nowhere to hide nor anything to eat or drink. Then they can sit there and die from hunger and thirst or die in suicide charges.