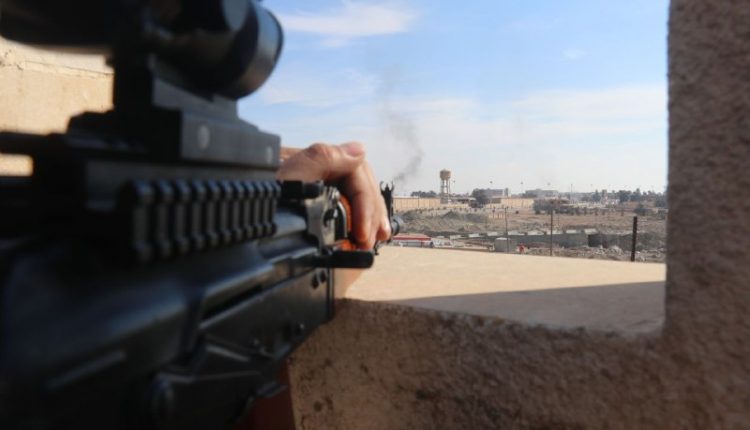 ISIS terrorists attacked the prison, which run by the US-backed Syrian Democratic Forces (SDF), late on January 20 with the aim of freeing their comrades. During the attack, the terrorists detonated a car bomb and a booby-trapped motorcycle at the prison’s main gate. They also blew up a number of nearby fuel tankers and tanks.

The attack, which began as an operation to free ISIS captives, ended up with the terrorist occupying the prison and nearby areas.

The last video released by Amaq shows around two dozen fighters of the SDF who were captured by ISIS terrorists during the attack.

ISIS terrorists are still holding up at Geweran prison and nearby areas in the southern part of al-Hasakah city. The SDF is currently working to contain and neutralize the terrorists with support from the US-led coalition.

Coalition warplanes carried out several airstrikes on gatherings and positions of the terrorists. The coalition also deployed a number of M2A2 Bradley infantry fighting vehicles near Geweran prison.

#Hassakah #NESyria :#The #US fierces were stationed in two #Bradley type vehicles and two military armored vehicles in #Gwiran neighborhood roundabout near the Industrial Prison in #Hasaka, about 200 meters away, amid continued shelling on the prison perimeter. pic.twitter.com/6rx1TEQswL

According to the most recent update by the London-based Syrian Observatory for Human Rights, the battle in al-Hasakah city has so far claimed the lives of 56 ISIS terrorists, five civilians and 28 personnel of the SDF and its security forces.

While the SDF appears to be making some progress on the ground, the battle in al-Hasakah city may not end soon. ISIS terrorists could resist for several more days.

Bunch of worthless and expendable ISISdiots sent by their masters to suicidal mission, only to justify SDF occupation and US presence in the area. America Akbar!

Prisons for ISIS terrorists????? Are you kidding me????? Execution on the spot is all those Americant-owned sub-human lizards deserve.

AGREE. THEY ARE MERDolfgan SCUM. SHOOT THEM AND THROW THE FILTH TO TTHE OCCUPIED ANATOLIA

Sure. Mongols did it with Bagdad in 1258. It took many centuries to recover that destruction.

Thats the point,another point is if those Kurds hadn’t collaborated with the Americans that area would be under the Syrian Government control and this wouldn’t be happening,they are keeping those Isis animals alive because the Americans may want to employ them at some time.

The canada unity website is down right now. Too many people visiting it.

US intelligence has supported daesh in this attack . US want to prolonge a stay in syria and iraq and they need excuse to stay even if they have to sacrifice list of syrian allies whish is kurds. Most of SDF are former isil members and defently under US control.

we don’t see anything in the first video….we want to see corpses. bullshit

Would have been a good idea to drop a FOAB on their dickheads.

Peace in M.E in 3 steps. Kill/Kick invaders – Zion – Westerns, they don’t belong there. Kill Wahhabism End Kurds gangs and terrorist cells which are led by the CIA and Mossad.

Also, morons who said, “the US never took any prisoners which were ISIS fighters from SDF hold prison”. Come here and bitch once again. One of them is here and crying like bitch none stop, trying to cover for this beloved terrorist/gang Kurds. But he is known as a rtded.

Russia, in fact Soviet Union, started the thing with the Kurds.

Hahahaha, What a daring attack! I luv it! May Allah help and give victory to the mujahideen against the satanic west and their fake coalitions. May Allah bring back Sharia law on earth back again, Ameen! Death to the western fake Christian, feminist, homo and transsexual laws! the plot of Satan is always weak! Allahu Akbar! Allah is the Greatest!

No to transsexualism no to Islamic terrorism! Both of you are equal enemy of the values.

Why they keep them alive? Kill those isis terrorists then they can cause no more problems. This was the excellent moment to liquidate 50% of them.