An ISIS VBIED also targeted an SDF headquarters in the Bab Baghdad area in eastern Raqqa. 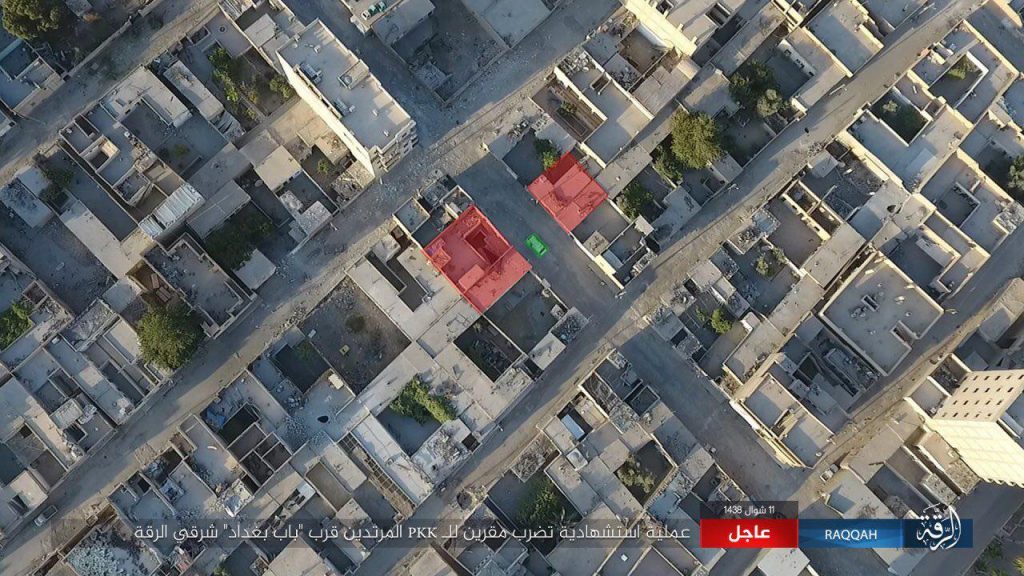 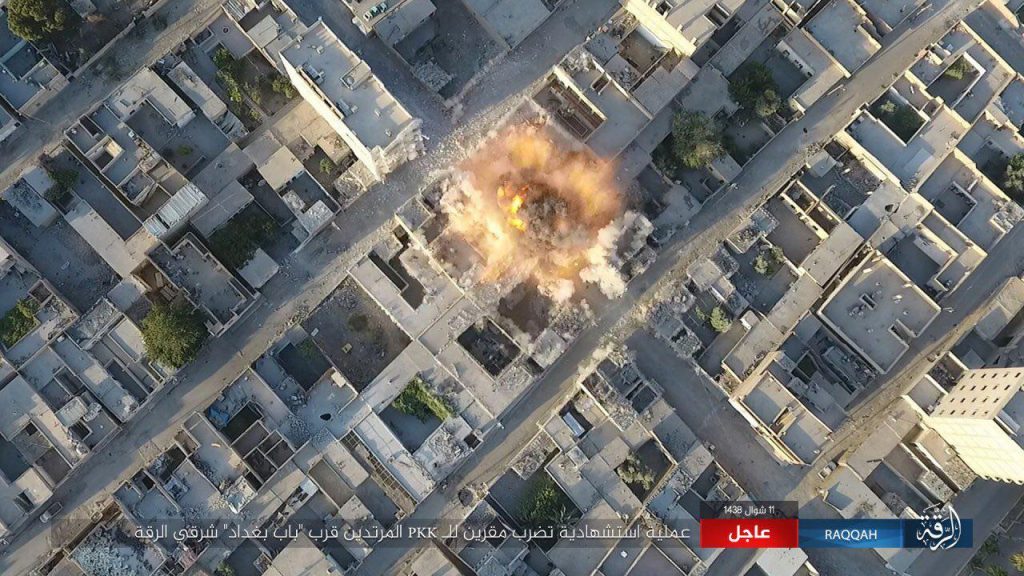 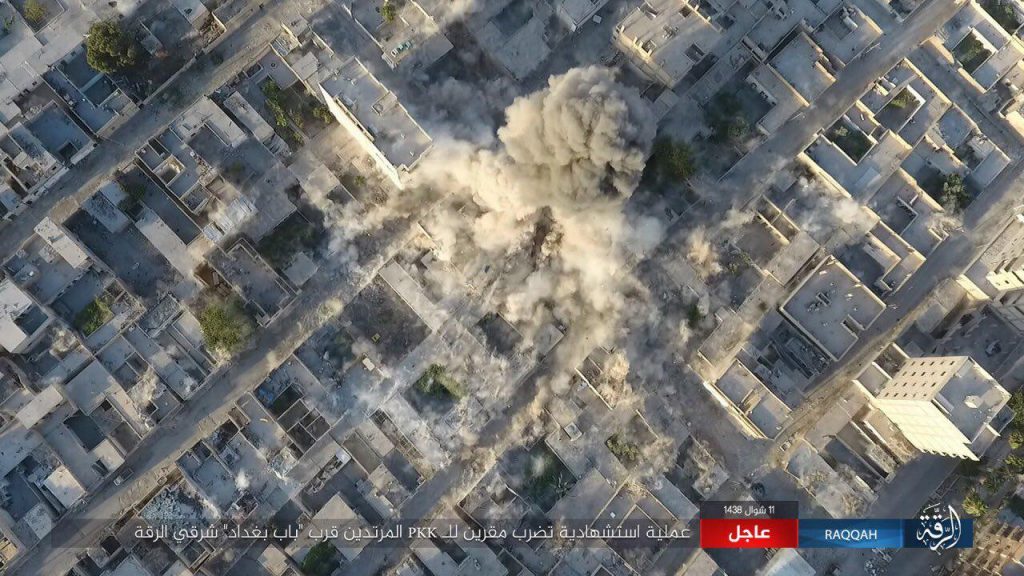 The ISIS-linked News Agency Amaq published photos of clashes between ISIS and the SDF in the Bab Baghdad area. 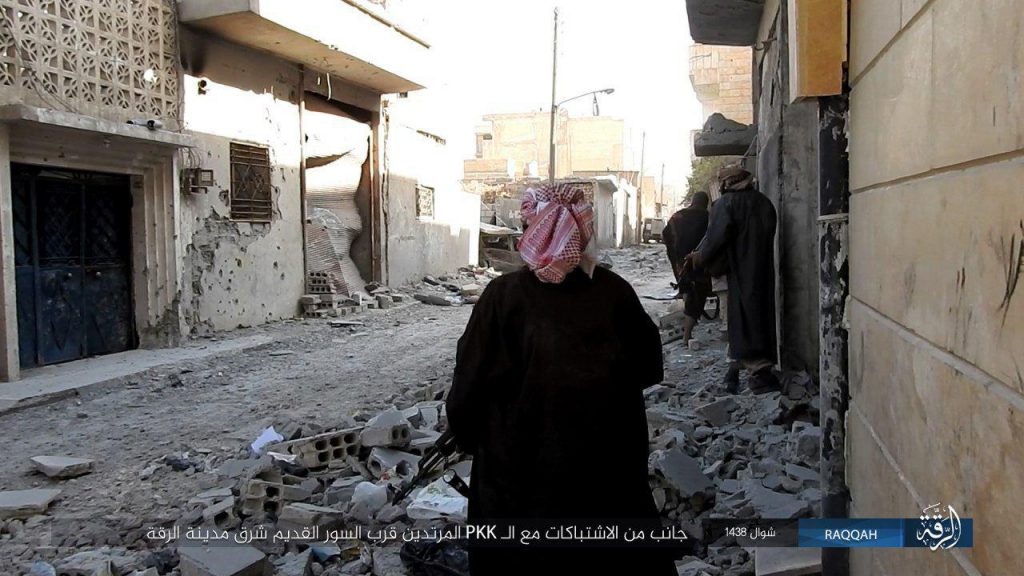 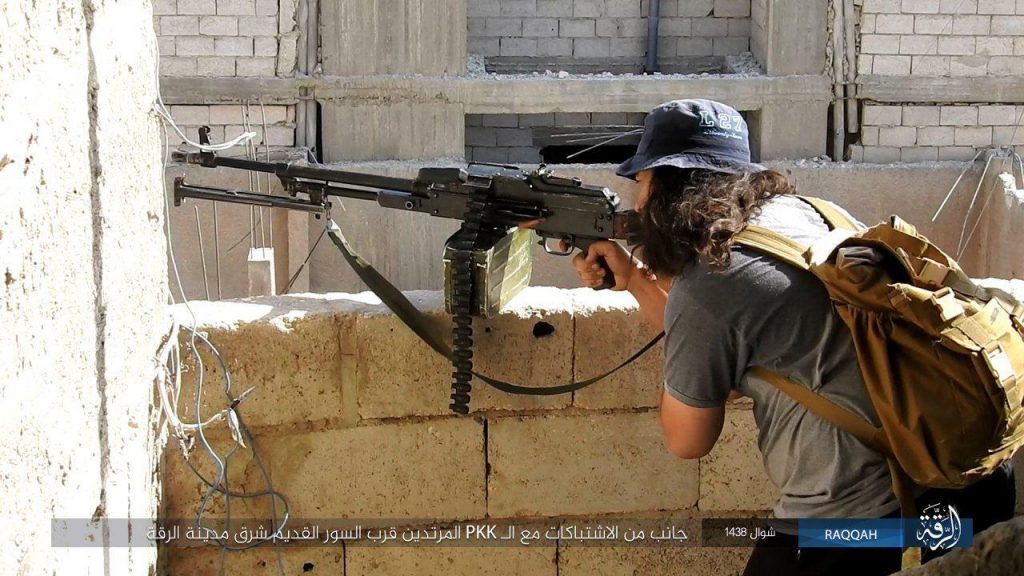 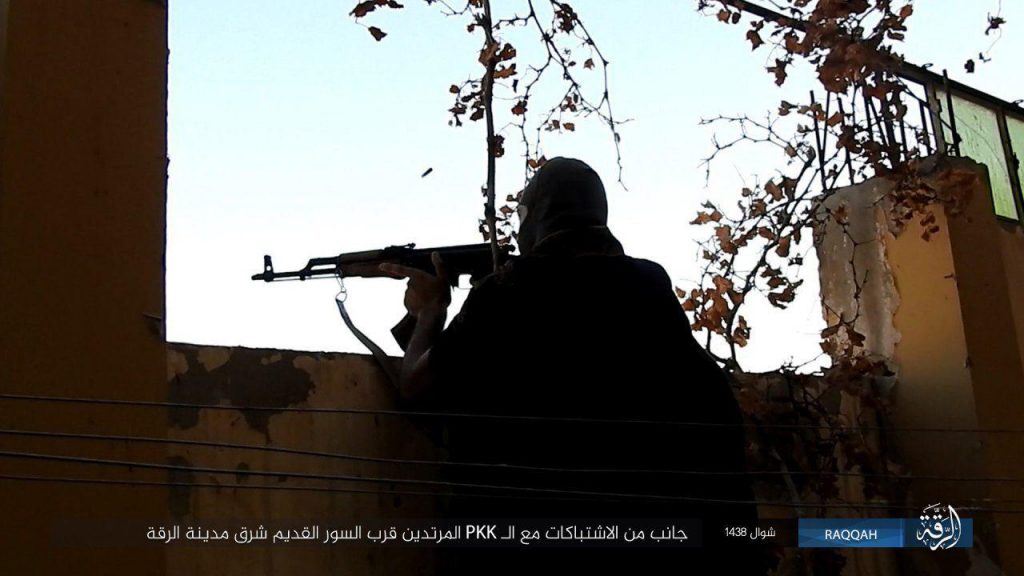 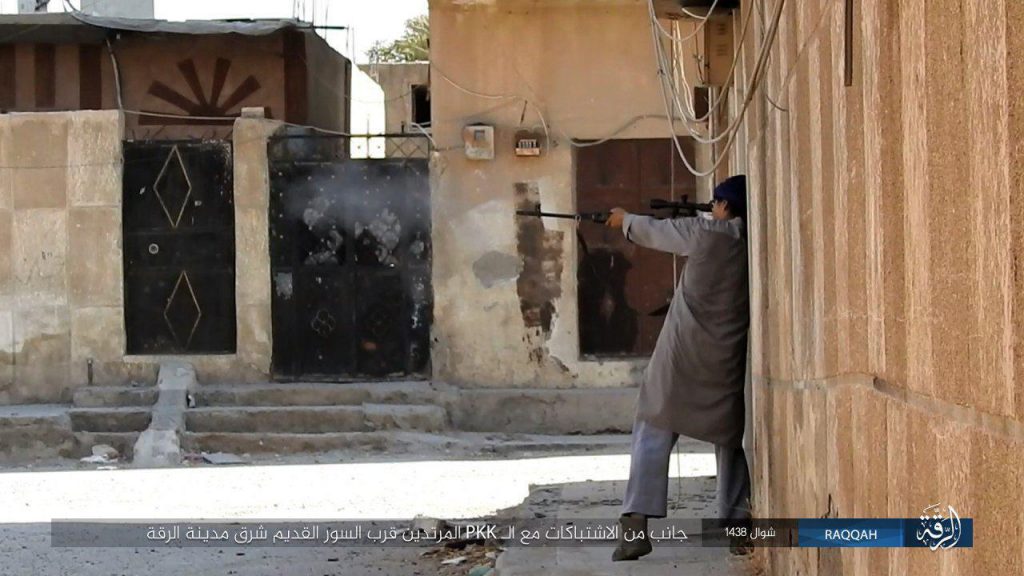 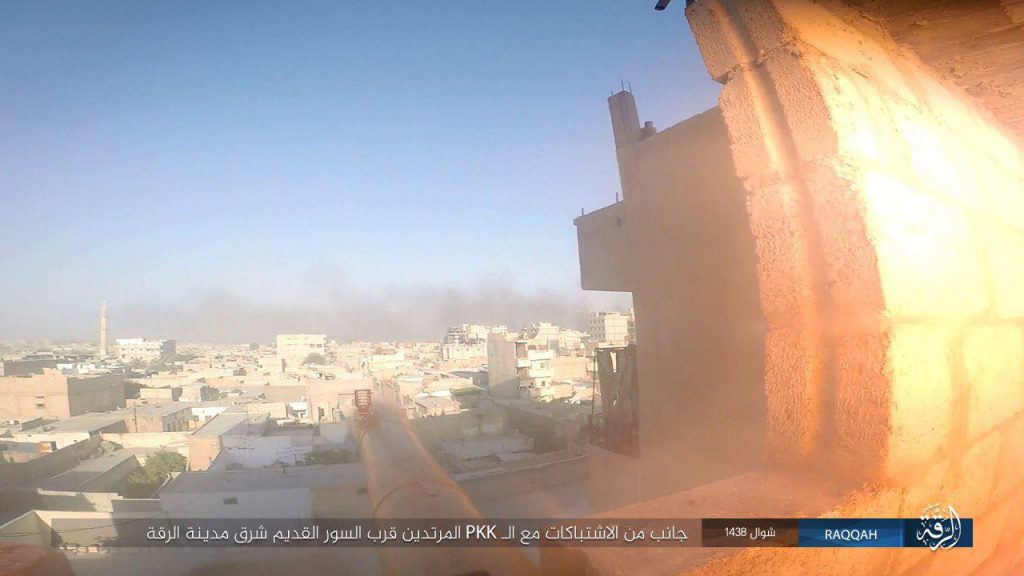 The SDF continued its attempts to advance in Al-Dera’iyah District in the western part of Raqqa. The SDF also attempted to advance in the Gedar al-Abbasi area towards the Old Raqqa area.

Footage of Abasid wall of Raqqa which partially surrounds the old city, here from the east side
YPJ media#Raqqa #SDF #YPG #YPJ pic.twitter.com/PctYcjeShH

SDF fighters managed to down an ISIS drone east of Raqqa. 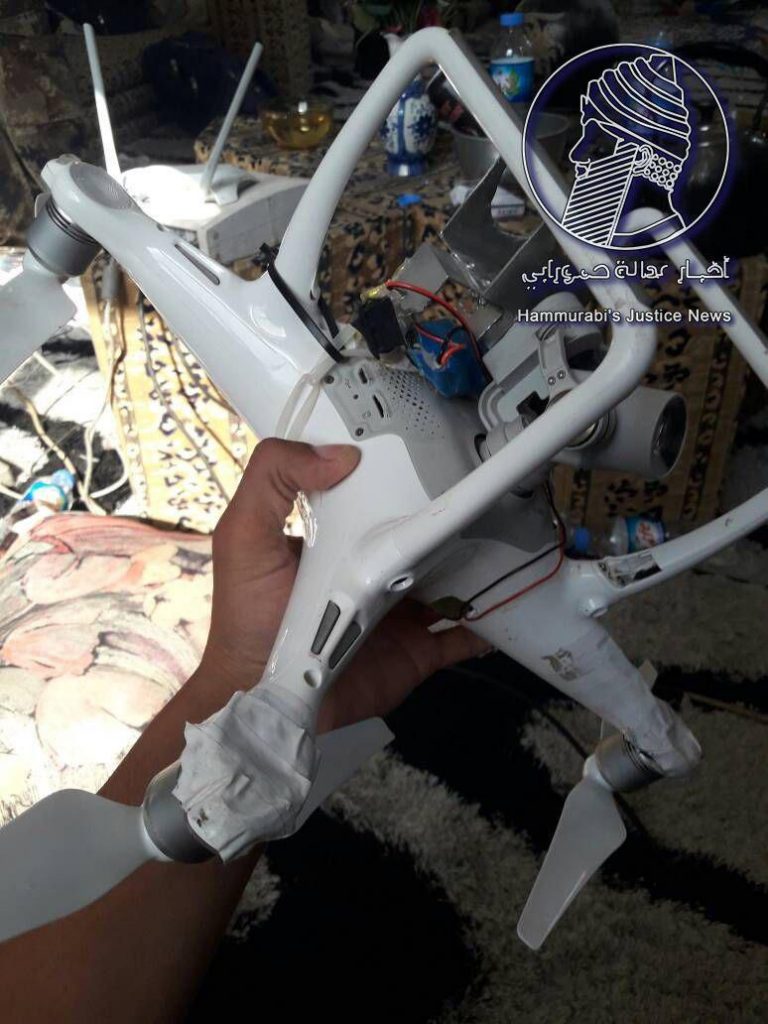 According to opposition sources, three civilians lost their life in the last 24 hours as a result of the shelling of US Marines and the SDF.

Reports claimed that a large number of Arab youths fled from the forced conscription campaigns launched by the SDF in the province of Raqqa. Opposition sources said one young man was killed during his escape after being run over by the SDF vehicle. It seems that with the slowdown of the military operation in Raqqa, tensions are rising between the Arabs and the SDF in the province.

Arabs are allegedly hiding from the SDF: 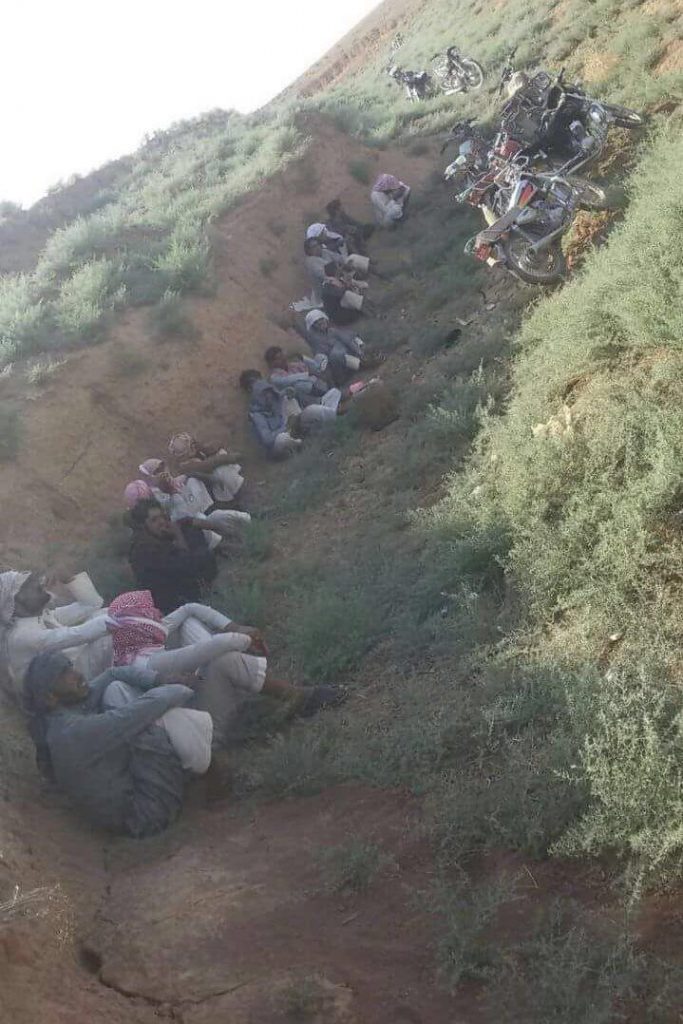 Deja vue SDF, your military capabilities are being displayed. You are not a fighting force, you are some dead beat selection of mercenaries and paramilitary units. SAA is going to have you for lunch.

Eventually everything falls apart. Most likely Turkey and Syria first though.

The SDF can’t even get people to support them in Afrin or Manbij without the threat of a gun . They will fall so easily what do expect with Pirates with very little training and battle experience and shooting fleeing civilians don’t count . Turkey like Syria has Kurds in its armies and very inclusive .

Yes ,epsom salts would take the swelling of your head down nicely would relieve the pressure of too much thinking, a good dunking will do you wonders .

Yeah, my arse you mean

SAA? That SAA, who could only move a little bit forward because SDF does the major fighting and because of uncle Putins massiv support – LOL. Let´s see what´s going on. Let SAA make their dirty deals with Erdoscum, let Erdoscums troops and the socalled FSA try for Afrin – there is nothing fixed, but a lot is possible ;-) Biji und so…

Only an amateur armchair Keyboard General would open their yap with very little knowledge . The fact that the Palmyra-As Sukhana area is full of rats nests for the vermin to hide and securing the region from IED and sabotage and the rats snipers is important . Now once the other offences start on Saturday we should see the flight of the bumble bees followed by the Ride of the Valkyries (Der Ring des Nibelungen). Well it is not Blucifer at least like those FakeSA Knights at Al Tanf .

Only an amateur armchair Keyboard General would open their yap with very little knowledge You talking about yourself and Jesus right?

Sorry to have left you out didn’t do it intentionally!

Big talk from someone who has to make deals with the terrorists they fight with in order to advance against other terrorists PATHETIC. Change your name you mock Jesus with the brain IQ you just displayed.

Good. The back-stabbing SDF bastards should get what they deserve.

Sure, they get VICTORY!

They won’t get anything do you really believe Turkey is going to sit by and let PKK mass an army on their door the next operation is coming with or without Russia’s help.

The Irish have been fought about 800 years against british colonialism and then the biggest part of Éire succeeded… The northern part will fight 800 hundert years more, if it´s necessary… Turkey is going to hell with their actual socalled President RTE, they will be down, down, down within a few years. Kurds will succseed to have real selfgovernance or die in the trying. I still hope for the first… ;-) Biji Kudistan! Tiocfaidh ár lá!

You do realize that Northern Ireland consists mostly of protestants, who have NO DESIRE WHATSOEVER or joining the Irish Republic, right? Making broad general statements of things you know nothing about only serves to make the rest of your argument look weak.

They get the cowards reward which is a death by a thousand cuts . If you can’t see that then you are pretty naive also hard of hearing . They lack the support of the people even an idiot can see that among these people . They hide at the back knowing full well they will die if they are first in there .

So is ISIS karma to iraq forces and iraq civilians?

Nope, just to the Kurds of the SDF..

Sdf forced conscription in raqqa is simply using Arabs as human shields. They are not arming them to have a real chance to survive because the Arabs will turn and shoot the sdf.

And then you´ll wake up and your bed is wet? And baby are delivered by the pope himself? Must be very lonely and monochrome in your small black + white world – Poor guy!

Just another idiot remark by a blind man walking in cave full of Bats , eventually going to get Bat Guano all over you.

Nobody has the secret sauce for urban warfare against a foe like ISIS. Who are these people who talk about a ‘quick victory’ against fighters who will fight to the death?

I read that Raqqa was more sprawling and easier to take than the other cities but in the picture above it looks like classic city blocks. I’ll grant you that those are mostly one story buildings but that is all you need to hide a sniper, drone operator, or VBIED. It isn’t like Baghdad that had those super wide streets where you could easily drive in Abram tanks, not that the SDF has any of those.

You forgot about Aleppo? The Russian, SAA and allies did much better than these amateurs. When Russian Air Force was killing terrorists in Aleppo, MSM was crying out against war crimes against humanity.

Please for every “terrorist” Russia killed 6 innocent people caught in the fighting the worst mistake Russia ever did was back that child murderer Assad but then again Putin is not any different blood thirsty killers makes ISIS killers look like amateur hour.

According to the SOHR which has an anti-Assad bias and uses rebel sources, in the final 4 mo’s 2,000 civilians were killed along with 1,000 fighters. It wasn’t anything like ‘6 to 1’ and yes, most of them were affiliated with Al Nusra or whatever new name they started using.

You have no evidence for your claims. Term “civilians” entailing terrorist’s families that lived in the proximity or those that supported them, become virtual targets as they collaborate with the terrorists.

You have no evidence for your claims. Just like you.

Russian intervention is a good thing! Or would you prefer an Jewnited states intervention?

How many year’s was that again ?? Jesus just say you don’t like sdf that is all you have to say ,I believe they have done pretty well taken about a quarter of Syria !!!

Population wise, the SDF has about 10% of Syria. The largest city the SDF took was Manbij which took them about two months after surrounding it. In the end, they allowed the 400 ISIS fighters to relocate. Allowing ISIS to relocate is understandable to spare whatever population was left in the city, my only point is that the SDF is unproven in urban warfare. They have done well in sparsely populated areas where mobility is key.

The SAA and their allies did very well at Aleppo. It only took them about 4 mo’s once they had the enclave surrounded and they had about 5 ceasefires. I bet Mosul could have used a humanitarian ceasefire or two over 9 mo’s.

Popular wise, SDF rule some 20% of the present population of some 17 to 18 million. This includes some 1 million refugees, very many of them kurds out of Aleppo city.

The siege of east Aleppo lasted a few months, after the city was completely encircled. I am indifferent to SDF, the observations in view of Racca operations is, they do not have the numbers nor experience. As far as taking a quarter of Syria, they have not fought any major battles, they moved as ISIS withdrew, ISIS and SDF being American proxies being played against each other to fulfill American ambitions in the Middle East.

They finally retake much of the city after years of battle lol. Keyboard warrior knows nothing.

Apparently they haven’t retaken much of the city itself. And even that could come to a shuddering stop if the Turks ‘get punchy’ up north in Kurdland.

i agree! Lets not forget that al-nusra had US intel and western media propaganda against them saying that the Russian’s were killing civilians and bombing hospitals!

Managing director of Google says we are paying $97 per hour! Work for few hours and have longer with friends & family^ho65d: On tuesday I got a great new Mitsubishi i-MiEV from having earned $8752 this last four weeks.. Its the most-financialy rewarding I’ve had.. It sounds unbelievable but you wont forgive yourself if you don’t check it.Then start by visiting this link ~xf65d: ➽➽ ➽➽;➽➽ http://GoogleFinancialJobsCash355BuzzPaper/GetPay$97/Hour… ★★✫★★✫★★✫★★✫★★✫★★✫★★✫★★✫★★✫★★✫★★✫★★✫★★✫★★✫★★✫★★✫★★✫★★:::::~xf65o….

Yes, SAA did wonderfull with tens of thousands Iranians, Hezbollah etc and they still needed the YPG to block the FSA turning westward.

The siege of Aleppo lasted some two years against divided FSA, Al Qaeda and other groups.

In the end, the SAA let the besieged rebels go to Idlib. Something they accuse SDF of doing in Raqqah. Wonderful. Short memory you guys have.

Probably the “FSA” who are losing or drying in droves in raqqa while YPG saves their best forces from being mowed down by ISIS and let the FSA and ISIS mow each other down then enter.

Reading some of the comments its seems certain “users” are trying to disrupt/degrade and sow discontent with the community. Hasbara anyone?

“Thanks to Edward Snowden, we now have solid proof that paid government trolls are using “psychology-based influence techniques” on social media websites such as YouTube, Facebook and Twitter.”

So having avoided conscription into ISIS, the young men of liberated Raqqa (and we have to assume they are, for the most part, very young men) are being given an opportiunity to fight for a ‘new’ Syria by being drafted into the ranks of the FSA? At least the can take solace that, should theby be captured by the SAA, they might expect some quarter. But if they’re fighting anybody else, a bullet saved for themselves might be their best way out – or getting “run over” while fleeing a democratic ‘press gang’.

The SDF will not allow recruiting by FSA in lands they hold. Recuiting is done, and will be done, by the SDF, either by YPG and YPJ (now including many arabs) or by Sanadid, JAT or by paricipants in the RMC, Raqqah Military Council etc.