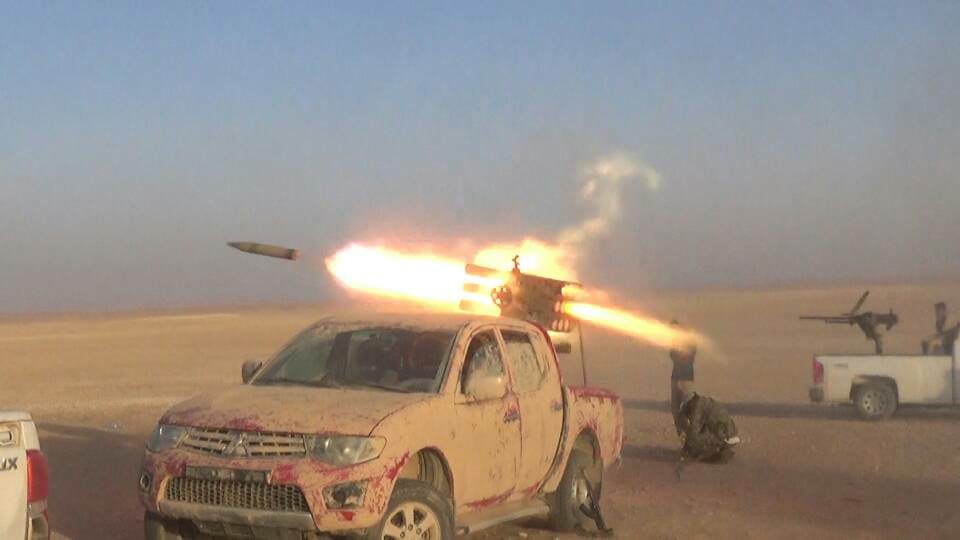 The Syrian Arab Army (SAA) and its allies backed by the Russian and Syrian air forces, continued advancing east of the Arak gas field and capture several points from ISIS 3 km east and north of the field, according to the Hezbollah media wing.

A report of the Iraqi Al-Ghadir TV channel, showed a large deployment of Russian troops in the Arak gas field area in order to support the SAA operation. It seems that Russia have deployed 152mm artillery units to provide fire support to Syrian forces.

In the southern part of the Deir Ezzor province, the SAA captured the strategic Hamima village located 30 km east of the T-2 station and 80 km from Al-Buqmal at the Syrian-Iraqi border.

According to pro-government sources, the SAA will liberate the T-2 station and the entire road between it and the T-3 station southeast of Arak gas field within few days.

????Russian & Syrian soldiers are fighting side by side against Daesh (ISIS) terrorists as they advance towards Al Sukhnah, Palmyra CS today pic.twitter.com/ljxrvtvp5Y

A Syrian officer confirmed to the Al-Ghadir TV channel that the current goal of the SAA is to seize the heights on both sides of the Palmyra-Sukhna roa. The goal is to control the road to Sukhna. The road is very important for the transport of heavy weapons during the expected operation to break the Deir Ezzor siege.

“”A report of the Iraqi Al-Ghadir TV channel, showed a large deployment of Russian troops in the Arak gas field area in order to support the SAA operation. It seems that Russia have deployed 152mm artillery units to provide fire support to Syrian forces.””

The dreaded Russian artilery will make ISIS eat sand and die in the desert. Identify their hideouts and paint their targets and let 152MM HE rounds send them to their imagined paradise.

Russian manned artillery was used in Latakia to punish the Turkmen who murdered the Russian pilot in 2015 if you remember.

and i have vioes, on which russians demanded, that they are russians :P

Your point being Solomon ?

my point is, that the russians are liar. simple genetically can not sell the truth. i saw this during soviet era and also now.

If you are describing the millions of Khazar Russians I agree with you.

no, the russian politics.

Why don’t you make some intelligent arguments? It is a fact that Russians provide fire support to the SAA and allies using SPGs, MLRs, helicopter gunships, and air power. It is because of Russian presence and weaponry that SAA and allies are winning the war in Syria against the axis of evil.

shut up! russians ALWAYS denied. i have videos from rt,ru with putin, shoygu and that blondie of MoD.

Solomon you lie. Russia is not going to divulge publicly what armaments they have deployed in Syria and what their forces are doing. So continue listening to the lying MSM and keep it up……..Russia is weak….Russia is weak nonesense.

Is that blood on the toyota? Now that looks sick lol

No, it’s the original paintjob. Looks like mud camo needs some refreshing.

After the war. No time at the present to wash cars in order to wipe out – ISIS.

Look good the way it is.. blooded, please note the stabilizing legs for the rocket launcher

Aver y large scale and rapid advance very impressive. They may be in Deri Azur in 2 weeks.

God I cannot wait to see the articles on here, Al masdar news and other sites saying “SAA SECURES DEIR EZZOR” or something :)))

BETTER: Deir Ezzor CITY my friend. That would indicate they have the western parts of DE countryside.

I am very curious how they will go on. The Iraqi forces are less successful against ISIS and as a consequence the Syrian army is now facing a border behind which there is ISIS. If they go much further east that would make them vulnerable.