FILE IMAGE: the US base near Qarah Qawzaq, Syria

US forces have captured ISIS leader Abu Bakr al-Baghdadi and he’s now held at one of the US bases in Syria, the conservative Turkish daily Yeni Şafak claimed on Sunday.

According to the report, al-Baghdadi was captured in Iraq, then transfered to the US base in Syria’s Ras al-Ayn and then to the US base in Rmeilan. Additionally, US forces allegedly captured and transfered 7 high-profile members of ISIS. One of these 7 terrorists was an Iraqi citizens, others were foreigners.

The report provides no additional details on the issue.

On November 14, Colonel Ryan Dillon, a spokesman for the US-led coalition, said that the coalition had no cofirmed information about the location of al-Baghdadi.

He is in California more likely

Or Tel Aviv for Hanakah :)

Being toasted by Mossad, and then he will go to Temple.

Could be true because this is fake news and it was announced that he was killed few years ago. He is a good partner like Bin Laden

There is a report that he has been spotted at Disneyland 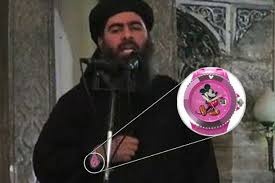 Its called a “debriefing”….

Turkey is taking a stand. The US-Israel might switch quickly to creating Kurdistan in Turkish territory as punishment to the turks. This is going to be ugly.

Burial at sea anyone?

no dna, no corpse pictures (oughta have some respect for the guy that allegedly killed 3000 US civilians in wto).

What a masterpiece, especially those who believed it.

Baghdadi, nome de guerre, will return to Israel for rehab.

Is Baghdadi waiting for his transfer orders to show up? :D

Its time for Tea and Medals including a couple of Purple Hearts.

The Purple Hearts rewarded because he has died sooo many times all ready? :)

Paper puts it all wrong. Here’s how it actually heppened:
Baghdadi and other high ranked operatives were evacuated by unidentified helicopters and brought to the base to rest, regroup and receive new orders before next deployment. No promotions or decorations expected due to poor results of “Daesh” operation which operative Baghdadi failed miserably.

His new deployment may be to Europe as punishment for the EU not relocating their Embassies to Jerusalem :)

No relocate but based there and share the operations room

More BS from the coalition of satanic chaos.If they do have him then its to protect him and maybe decorate him as a hero for the zionist cause.

The bullshit comes from turkey

Turkey is a full and proud member of the satanics.

Soon he will escape with a gaggle of jihadi’s and U.S. weapons, along with long lines of Toyota trucks.

Just confirmed that Al Baghdadi doesn’t exist and is a CIA agent.

All the dots are connected.

The theory is valid.

and who’s got high iq? you think that being able to succesfully “select the next correct figurine” makes one person more intelligent?

Who is talking about “selecting the next correct figurine” ?? XD

Sunnis are fu…… low IQ scums. I can tell you a lot about them if you want. I know them very well.

They are very stupid. They are little dictators but they always cry about dictatorship. They are easily manipulated. They like ignorance and stupidity. They just like power and money but even don’t like to work for it.

Who the f… will fight for the invisble man ??? XD. Also Sunnis. That’s the f… truth. Sunnis are it seems the dumbest people on earth.

That’s exactly why Sunnis are the american best useful idiots. Americans are way more intelligent than Sunnis. People say that Americans are dumb. Americans are not dumb at all. They own more than half of world. How can they be stupid ?

When you say something to a sunni that he doesn’t like even if it’s the truth, he starts being irritated.

Sunnis know absolulety NO LOGIC. THEY JUST CAN’T THINK. That’s why they are loosing everywhere.

the sunnis are like sheeple..i know because i am a sunnis and i watch sunnis all around me. Its scary how easy to manipulate by using hadis. for example they believe one must kill lizards if found because of ancestry sins of the ancient lizards.

Exactly. Only people that have lived with them know how stupid and naive and violent and greedy and dictators these people are.

Going through a new training programme.