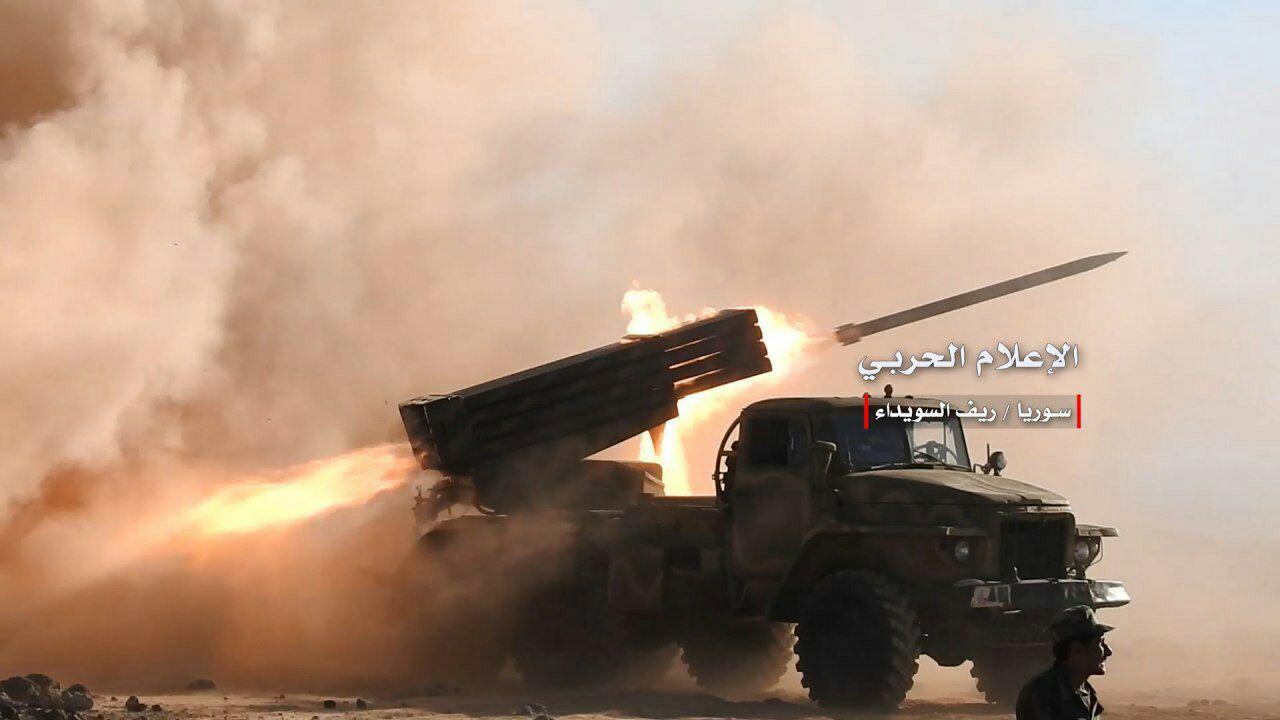 The remaining fighters of ISIS in the eastern al-Suwayda countryside have launched a new attack on several positions of the Syrian Arab Army (SAA) and its allies in the key hills of Brakat and Alia, the Syrian Observatory for Human Rights (SOHR) reported on July 11.

The pro-opposition monitoring group didn’t clarify if ISIS fighters managed to captured any position. However, it claimed that several fighters of the terrorist group and the SAA were killed as a result of the clashes.

Sham Hamdan, a correspondent of the Syrian Arab News Agency (SANA), said that the SAA and its allies repelled ISIS’ attack, only hours after its beginning. According to Hamadan, the terrorist group was trying to cut off the supply line of the SAA’s units in the eastern al-Suwayda countryside.

A week earlier, the SAA and the National Defense Forces (NDF) foiled a similar attack of ISIS on their positions in Tell Bassir after killing and injuring several terrorists.

The SAA and its allies will likely launch a new phase of their military operation against ISIS cells in the eastern al-Suwayda countryside, once the southern governorates of Daraa and al-Qunitra are secured.

This is what I was talking about when I mentioned the ISIS infected part of East Suwaida.

Pocket came from Al Tanf as you do know that.

I do. But I just said that it should be marked on the map. Of course, after the full closure of south-western front, the next stage should be to annihilate or force out USA occupiers and their FSA/ISIS minions in Al Tanf area. Recapturing that territory is the only way to guarantee safety for eastern and south-central part of Syria.

It’s too small and insignificant so they don’t label it as they control no territory but run willy nilly like in Iraq.

Recognize the Druze militia in Suwayda governorate as a legitimate part of the Syrian military, equip them as such and provide them air support. They can take out the local ISIS trash a lot more efficiently than regular SAA guarding remote Suwayda bases far from supply lines. You can’t just continually roll the Tigers to the other side of Syria every time the head-choppers regroup and attack – they are not a substitute for the entire SAA. Syrian Ba’athists suck at anything military, that’s why the Russians had to focus on the Tigers for now.

There needs to be a reorganized SAA that comes out of all this. Hopefully, the Syrians will listen to the Russians on how it needs to be organized to be effective. The Russians are concerned with appearing to interfere in Syria’s affairs of state, so they won’t push their advice on them. The Syrians would be wise to listen to them, anyway. The head-choppers in Syria are never going away permanently – they just scatter like roaches if you try to exterminate them by stomping on them.

That’s not going to happen. The Druze decided to wait this out just like the Kurds in Afrin. The Druze got tired of being the tip of the spear for Assad’s incompetent commanders so left the SAA when their enlistments expired to go home to defend their traditional territory from encroaching militias. They also put a stop to the SAA’s forcing Druze men into their ranks to make up for battlefield losses and desertions. Their territory always had remained under Syrian government control so wasn’t like they’d switched sides.

Thing is though, as a dictator, which he is, lets face it, Assad fears a competent military way more then his enemies. Soldiers that actually know their jobs might get strange ideas when this war is over. Like marching their unit towards Damascus. Which they might get away with as some commanders. like the one from the Tigers, are very popular with their men.

This was why under both his father and himself the Syrian army was a feudal kingdom of sorts, with each general being given the command of a divisional sector ruling part of Syria and allowed to squeeze it for all that it was worth to line their pockets. Generals busy lining their pockets are not busy plotting to overthrow the president. And by doing so they become complicit to the regime. Making it hard for them to join any potential popular uprising. And overall it worked as almost divisional sector did not collapse to the Jihadis and their core HQ’s remained under government control. Except for two, the commands in Idlib and Raqqa. This was also why in Saddam’s Iraq any successful general during the war with Iran met with an unfortunate helicopter ‘accident’.

I wouldn’t be surprised that the reason why the biggest reason that the general commanding the Tiger Forces has Russian bodyguards and not Syrian commandos (which I’m sure can be just as good), is because the biggest threat to this popular successful commander does not come from Jihadi assassins. And that the Russians have decided that this guy is way too important to their plans to be subjected to any attempt at ‘retirement’ coming from Damascus.

Suheil al-Hussan is an extremely high value target for Israel and US and Saudi sponsored operatives and factions in Syria – SAA generals have certainly been assassinated by foreign, Israeli affiliated, agents in the recent past. The NATO/Gulf/Israeli axis certainly, proactively, searched for, and offered large sums of money, at the outset of Syrian conflict, to senior Syrian state officials and military officers to defect. So any foreign attempts to create an internal Syrian based assassin from within the state ranks would in all probability be structured around the very same bribery concept. Hence the Russian bodyguards – external and not subject to such foreign schemes.

What kind of nonsense are you trying to spin you are a total and complete moronic imbecile when discussing anything to do with the Syrian military. You need to look no further than most Western Nations for your assertions on everything you mentioned.

Well Air Force Intelligence a very strong and mixed secular group as they have played a major role in defeating US ,Israeli ,Saudi ,Qatari, Emarati,UK,NATO intelleginces and their forces for a long time.

We already had a discussion about the word you use so lightly as “dictator’ that is a description that can fit any leader in a regime in the west or EU, Israel especially the GCC or Africa etc. You should stop using a term you don’t even now how to use besides start learning the definition as you keep embarrassing yourself.

The SSNP is there but also called Tiger Forces or SAA always scare the crap out of ISIS is that Druze fighters are already in Hezbollah militias there. Seems you are losing track of what is going on as ISIS has not had any success as these were the same forces that eliminated them in the desert.

Sounds great but there’s one problem, none of the other Muslim groups would allow it. The Druze are probably the most hated group in Syria by other Muslims, their branch of the Islamic faith is more like the old original Jewish faith in a lot of ways, and because of that, they’ve been pretty much persecuted for it by all the other branches of Islam. Also there are about 10 pro Assad Druze militias, but none of them have huge numbers as far as I know [not sure about the one you’re referring to], most have only hundreds of fighters and some may have a few thousand, but the militias themselves were originally formed as self protection units long before this war ever started, and they’ve always been most concerned with protecting themselves from the other Muslim groups. I think they’d be more concerned with protecting their own enclaves than sending fighters out to help anyone else. They’ve also done a fair bit of butchering in the past, and with old scores to settle, that may be like putting the cat amongst the pigeons too. They might fight Isis as they’re supposed to, but they might also make some trouble that’s not needed right now.

Druze are compromised by Israel! Many of their fellow Druze live in the golan area! Their hands are tied! A fight against a force that would be agaist Israeli interests will not be allowed! Also i have a feeling the Druze population have been offered a deal they cant refuse by Israel! I dont think the Druze can be relied upon! Ass for Russia in Syria! U can bet ur balls that Russia is in charge in Syria! Their bases are free rent! They are permanent! U may as well call it “Occupied”! Of course russia will fix Syria, they wont want to go through all of this again! It is against Russia’s interests (a red line) that Syria is compromised! Its all about Russian gas supply to Europe and Russia’s own oil rich Caspian region which is full of muslims! This goes without saying dude!

The US base at Al-Tanf is where they come from, where they run to, and where they resupply from. Last year the SAA put a ring of steel around this 50km exclusion zone and the Russians bombed everything around it. It took less than 6 months and they’d cleaned out Isis all the way to the Iraqi border. I think a repeat is needed. Nearly every single Isis attack in Syria lately, has been less than 150km away from the base at Al-Tanf, way less than that in most cases, 50 to 100km away usually.