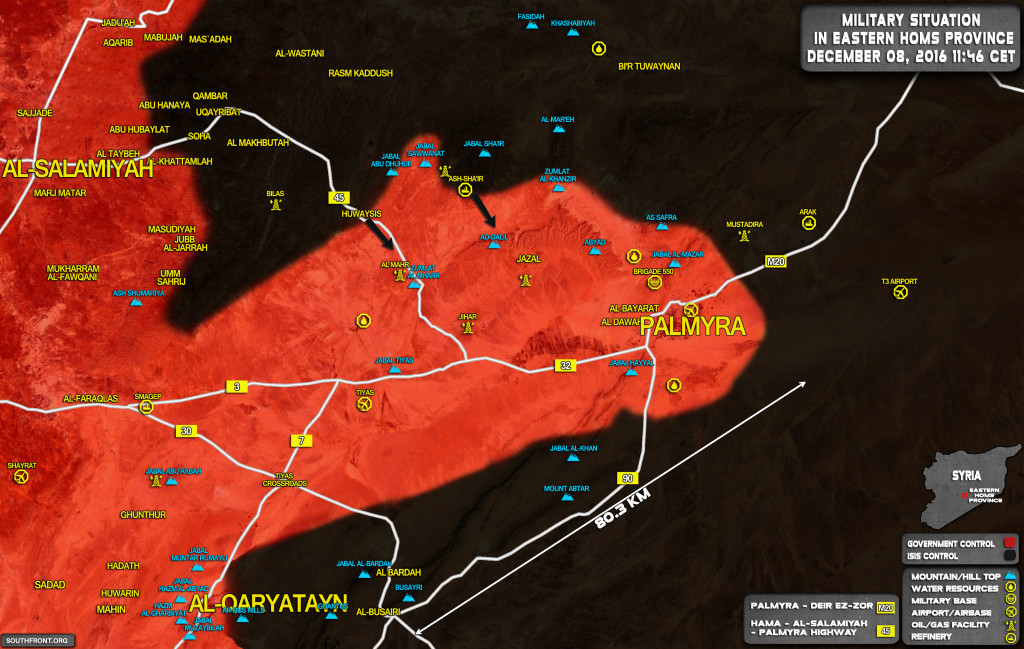 December 8 morning, ISIS terrorists launched a large scale attack on Syrian government forces north of the ancient city of Palmyra in the province of Homs.

The terrorist groups’ offensive has been ongoing in two directions:

After the start of advance, ISIS-linked Amaq news agency claimed that the terrorist gorup’s fighters killed over 60 Syrian soldiers and overrun government forces defenses in 8 checkpoints.

In turn, pro-government sources claimed that initial ISIS attacks were repelled. The Syrian state-run SANA news agency added that 8 technical vehicles belonging to terrorists were destroyed. Both versions have to be confirmed by evidence from the ground.

Local sources say that heavy clahes are ongoing in the area.

Today’s attack is the biggest ISIS offensive near Palmyra in the recent months. Most likely, it’s related to the recent defeat suffered by “moderate rebels” in Aleppo city. With this move, states sponsors of terrorism in Syria is aiming to show that the Syrian government has not taken an upper hand in the ongoing war despite all efforts of the Syrian-Russian-Iranian alliance.

I hope this will be a “wake-up call” to finally destroy the IS forces around Palmyra.

Contrary to South Front i say Idlib has to wait and the Turks have to be blocked at Al-Bab and IS has to be beaten in the eastern part of the country so there is a supply line to the shia crecent via Iraq,Iran.Also the establishment of foreign bases can be blocked.

The whole situation on the “Turkish front” is very unclear, my guess is that there may be some diplomatic agreements (ofc, not public) that somehow tie the players to certain rules. It could very well be that there is a commitment to postpone everything in that area until certain events happen.

yeah, after alleppo, a direct connection between PMU and SAA should be established. maybe via der ez zor

Also depends if SDF lets PMU come over from there side to attack ISIS.

Assad should just give up on idea of centralized Arab state and give federation like Russia suggested so they can bring the war to a close much faster.

Curious how ISIS instead of defending two separate enemies on two separate fronts (Bab and Ragga) chooses to go on offensives on a third enemy. That makes no sense.

They are not a normal army. The fighters in one region are not usually willing to travel to the other side of the country and protect Al Bab or whatever …

Normal or abnormal enemy, still one has to have a sophisticated command center to wage such a prolonged war as ISIS has done from Syria to Iraq, a command center with the ability to move fighters between different fronts!