The ISIS terrorist group has launched a large-scale offensive against the Syrian army south of the Syrian town of Khanaser in order to cut off the road to the government stronghold of Aleppo.

According to local and pro-opposition sources, ISIS terrorists have seized several villages south of Khanaser and are further developing an advance.

The government supply line to Aleppo is now de-facto cut off, according to reports. However, pro-government sources deny this.

The Russian Aerospace Forces have responded to the ISIS advance with a sworm of airstrikes. Government troops are regrouping for a counter-attack.

A map by a “pro-opposition” news agency, “Step News Agency”, showing the alleged ISIS gains in the area (blue): 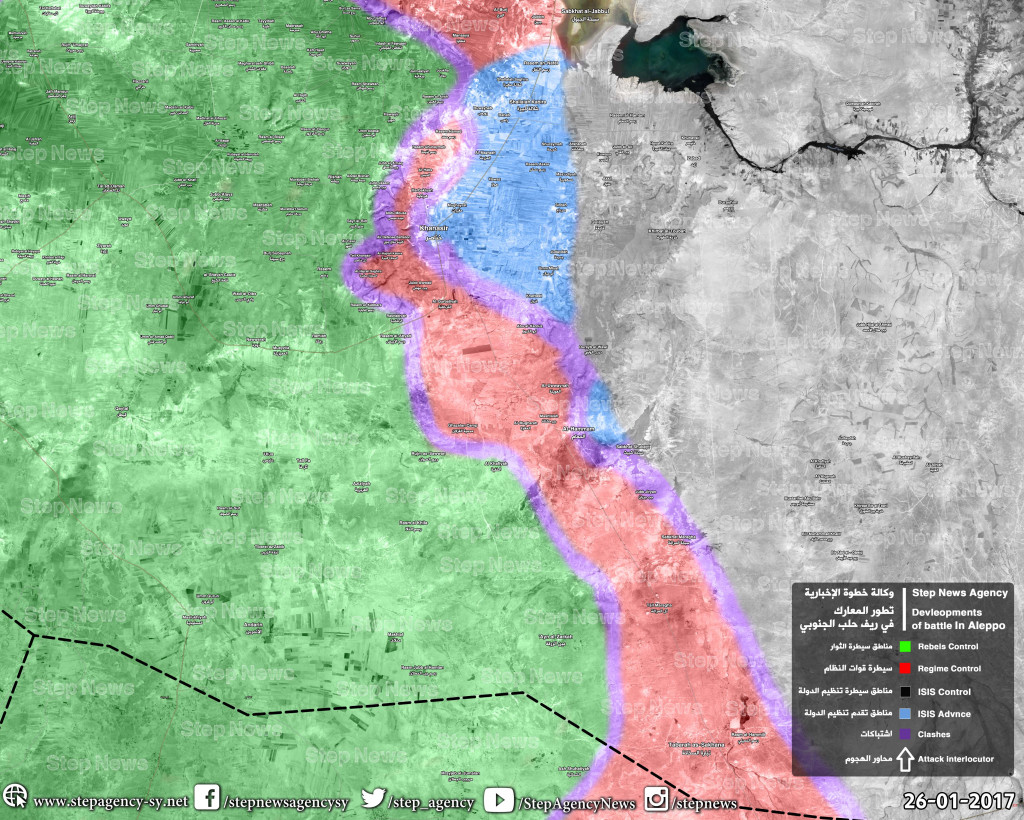 How do ISIS manage such ambushes ? Its true that Government troops and resources are pre occupied but then how Assad talk about capturing whole syria. Why do government forces are not able to detect such mass movements

That is just pathetic. They took 16 villages in one afternoon, did the SAA even fight for 1 minute or did they just flee for their lives again at the first sign of an ISIS force? The army’s fucking useless, filled with cowards.

I wanna see you overlooking positions of the jihadist rebels when they’re on the offensive, how would you act mr. armchair general?. Better to retreat than to be captured or killed.

So they’ve got the high ground too, and they still fled?!?!? PUSSIES!!! ISIS have no air power at all, the SAA do, this is yet another Arab embarrassment. A competent army stands their ground, especially when they have superior firepower.

they didn’t have superior firepower, they were outnumbered and outgunned.

ISIS don’t have a lot of members at all, they’re stressed on the Palmyra, Al Bab, Kuweires, Deir Ezzor and Tabaqa fronts, with what mass of troops were they able to overwhelm an enemy that has 200,000 soldiers within its ranks? They only won because the SAA fled like they did in Palmyra at the mere sight of an equal sized foe.

ISIS has between 40,000 to 70,000 men respectively not including the moderates that support them. The SAA is fighting all over their country and I’m pretty sure after 5 years of straight conflict the SAA doesn’t have 200,000 men anymore not even close if they did they wouldn’t need the NDF,Hezbolla, the socialist party, Iranian forces, and Iraqi militamen so yeah wtf are you on. You think ISIS is full of retards cause they’re not they even use drones and detailed maps to plan attacks. They used dummy tanks in Mosul to make the US use up bombs on fake targets, so yeah the only other power in Syria other than the SAA and the Kurds who have any fight left in them

The numbers stated for both ISUS and SAA are garbage. I guess we all like big numbers? Coalition says it took out the tank decoy! Unless they need to hit it again and again?

The offensive was repelled.Why you dont go there to fight you idiot.I will buy you a ticket to Syria.

Why should I, Syria helps Iran give missiles to Hezbollah, who are terrorists suppressing the real owners of Lebanon, Christians, as well as threatening Israel on a constant basis. If Assad didn’t funnel those weapons then maybe Israel wouldn’t have played a part in launching this war of self defence against this alliance.

Islam is the original source of fascism, only a Nazi piece of shit would defend it.

Superstitious mumbo jumbo is a bore but if people want to do it, that’s their business. Ignorant dickheads like you are a different matter; do your homework. Fascism is one of the bastard children of C19th liberalism.

That’s exactly what I thought, you’re a Muslim, fascist scumbag.

No I’m not, I’ve got better manners than you, that’s all.

You think that you have better manners than me? You first comment said “fascist dickhead”, later “twat”, so no, you’re a rude prick as well as Muslim scumbag. Which makes you calling me a fascist highly ironic, considering that your ‘religion’ could not be more fascistic if it tried. It is a cancer upon the world.

You’re only saying that because you have a fat arse and I don’t.

For sure, there is also a pro-government look that “no gains were made by ISIS”. But this is at least too optimistic. The situation is developing. The things should become more clear soon.

It makes no sense that the army command would not have anticipated attacks that were aimed to stop the advances being made further north. Assuming that the army command is not stupid, you have to hope that the claim that there has not been this loss and cutting of the supply road is totally false. Otherwise, incompetence.

Your claim was quite correct, the Syrian command was prepared for this counter attack.

The Syrian Army did a swift counter attack already capturing all the checkpoints (Thursday Afternoon) they loss and are making an expansion on the Khanaser Road creating a bigger buffer zone from what they have had previously from this attack.

Yes, it looks like Syria goverment forces know very little about tactics combat and defense, and Russia looks a little bite sleeping in its glory of strong air force. For example, how the terrorist can retake Palmyra within a couple of days, and Syria with Russia can not retake it in weeks ? ! This is incredible ! knowing the technology the Russia has and the sophisticated weapons that Russia and Syria have. This is JUST INCREDIBLE ! It sound more a stupidity and ineptitude. Of course, the terrorists are supported and directed by USA-OTAN-Israel…so, what ?. Are the terrorists to many ? so, what ? ….. and now Russia and Syria are looking for peace in Syria. I wonder, did Russia were looking for peace with Germany when Germany was occuping its country (Moscow, Leningrad, and Stalingrad) ? of course no, right ? What did it bring peace in Russia at that time ? ….. The total victory over Germany, and the destruction of Berlin, not less no more.

There is some action in the area, but this map is a propaganda joke for sure.